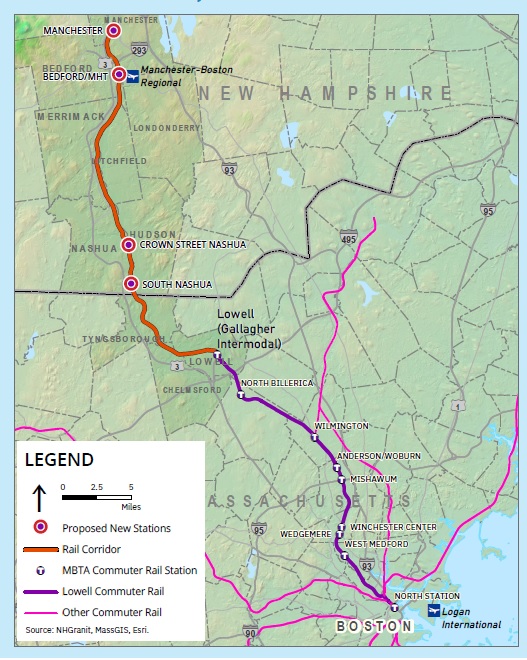 NOTE: This story ran in Monday’s Monitor. A reader posted an comment below it online about the legislature’s decision a decade-ish ago to reject federal funding to study this idea, saying that the GOP legislators who made the move wanted to widen I-93 instead (of course) but also thought it was unnecessary because: “One member of the legislature actually said we would all be using jetpacks provided by Dean Kamen.”

One of the longest-running transportation debates in New Hampshire, whether to bring passenger rail back up the Merrimack River Valley, has been rejuvenated by potential funding from the new federal infrastructure bill.

A public information hearing was held Wednesday about what is sometimes called the Capitol Corridor Project, even though it would end well short of the Capital City. “The purpose of the meeting is to provide an update and solicit input on the Project Development phase,” the N.H. Department of  Transportation said in its announcement. It will be both in-person and online.

As currently proposed, the project would continue passenger service north from the MBTA line in Lowell, Mass., stopping at two stations in Nashua and one in Bedford that targets Manchester-Boston Regional Airport on the other side of the river, before winding up in downtown Manchester. The goal is to provide “rail frequency comparable to existing MBTA Lowell line,” according to the DOT summary, which would involve up to 20 round-trips each weekday.

The project would involve upgrading about 30 miles of existing track, roughly 20 of which is in New Hampshire, including crossings and bridges; installing new signaling technology; and building four stations plus a layover facility. Cost is undetermined but part of the planning involves looking into cost-sharing with Massachusetts, private funding, and getting payments from “transit-oriented development” that is often drawn to commuter rail locations.

Service would not happen until 2023 at the very earliest, judging from planning projections.

A possible complication is that Pan Am Railways, the regional railroad firm that controls the track and uses it for freight shipping, is for sale. The federal government blocked attempts by rail giant CSX to buy Pan Am, citing a resulting lack of competition in freight shipping, especially in Massachusetts, but CSX is still looking to make a deal.

Variants of this plan, sometimes continuing north to Concord, have been floating around almost since regular passenger rail service to Concord ended in 1965. In 1981, a demonstration project brought service from Lowell to Concord for one year but the experiment was not continued.

Supporters say passenger rail would aid economic growth by further linking southern New Hampshire to greater Boston without adding to rush-hour traffic along clogged turnpikes, while opponents say it is a waste of money that would serve relatively few people. In recent years the idea has generally been backed by Democrats and opposed by Republicans, who have more than once blocked accepting or spending money to even study the idea.

The proposal got new life with Congressional passage of the $1.2 trillion infrastructure bill, which includes $66 billion for improvements and expansion of Amtrak’s passenger network. The New Hampshire expansion could be part of that expansion.

Passenger rail has been a part of New Hampshire since 2001 via Amtrak’s Downeaster service between Boston and Maine, which includes three stops in the Seacoast, and the Vermonter line which serves Claremont.

A firm called the Boston Surface Railroad Co. proposed in 2019 to start passenger rail service from Providence, R.I., through Worcester, Mass., to Lowell and then up to Manchester airport. Plans were put on hold when the COVID-19 pandemic hit and have not been updated.