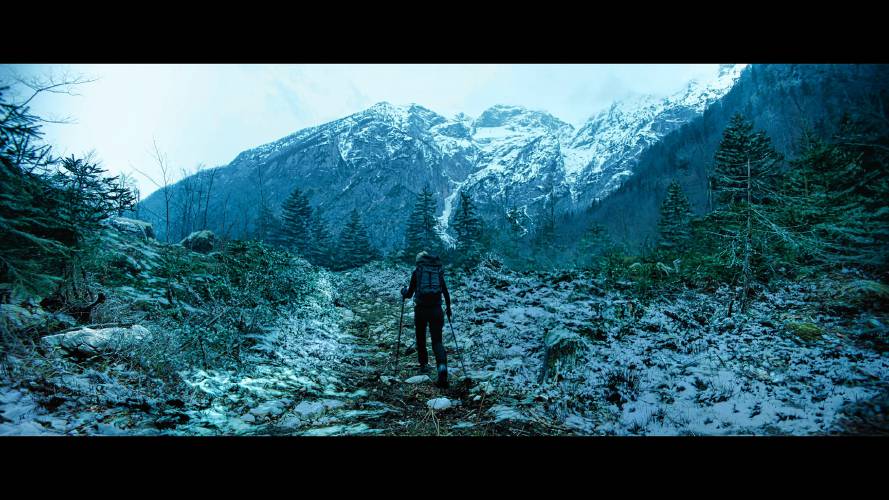 That's no Jewell Trail I've ever been on.

“I told my friends who pointed that out: just roll with it!” said Pam Bales, a back-country specialist whose rescue of a would-be suicide victim from the mountain amid vicious weather in 2010 has been turned into “Infinite Storm,” with Naomi Watts playing Bales.

The movie was filmed in Slovenia on the southeastern edge of Alps, a country with a long history of mountain climbing and making movies about mountain climbing, where filming is less expensive than in the United States. Craggy peaks near the capital city of Ljubljana stand in for the less-craggy White Mountains and were used in many outdoor scenes.

This means that people familiar with the Jewell Trail toward Mount Washington’s summit,  which Bales took on the October 2010 solo hike that launches the movie, will need to indulge in the willing suspension of disbelief that is often key to audience enjoyment of a real life story that is adapted for the big screen.

Despite the absence of the New Hampshire’s tallest peak, Bales said in an interview this week that the film gives a good feel for the dangers you can face on the mountain that holds claim to the worst weather in the world, even when it takes some liberties.

“I’ve experienced all those things, although not all in the same day – maybe not 20-foot spruce traps,” she said, referring to a well-known peril in which low branches on spruce trees collect snow to form a false bridge, luring hikers to fall in deep holes.

Bales grew up in Lincoln. In 2010 she was a member of the volunteer Pemigewasset Valley Search and Rescue Team –  Namoi Watts wears equipment like the team’s in the film, right down to a jacket patch – which gave her skills that came to her aid when she encountered the man known only as John. Clad in light clothing and sneakers, he was in the process of freezing to death halfway up Mount Washington.

Bales carried enough extra clothing to protect another person, a necessity for any winter hiking in the White Mountains. She warmed him up and was able to help and cajole John back down the trail in a harrowing slog through binding snow and winds that Mount Washington is famous for, only to have him get in his car and leave without another word.

It was not until the man, whom Bales has never met again, wrote a letter to the Rescue Team weeks later that she learned he had gone up so unprepared because he wanted to die. He attributed her effort and her words to giving him new hope for life.

This story came to light in a 2018 by New Hampshire outdoor writer Ty Gagne in the Appalachian Mountain Club magazine and even more so when it was printed in the Union Leader, with the title “Footprints in the Snow Lead to an Emotional Rescue,” becoming one of the best-read stories that newspaper has put online. The newspaper story came to the attention of script-writers and began the long process of being turned into a major film that according to industry sources, had a production budget of between $10 million and $20 million.

Filming for “Infinite Storm” took place in 2021 amidst COVID-19 restrictions that complicated everything.

Bales wasn’t part of the filming – “No, unfortunately,” she sighed – but she talked, messaged and emailed often with Watts and script-writers.

“I saw a rough cut of it in January. It kind of took me away,” she said.

Both the story and film emphasize the need for compassion and empathy when dealing with people who have suicidal thoughts. Overcoming them requires as much strength and determination as overcoming Mount Washington weather.

“Especially in the pandemic, people are so angry and frustrated. Just be a little kinder,” Bales said.

Now in her 70s, Bales volunteers for back-country patrols in national parks, mostly out west. There she sees the same problem that she saw on the Pemigewasset Search and Rescue Team: Inexperienced hikers getting into trouble because they didn’t take conditions seriously. The difference is that out there, it’s heat and dehydration which kills people rather than cold and hypothermia.

“Hopefully they come out (of seeing ‘Infinite Storm’) with the thought of being prepared – checking that weather report, especially on Mount Washington,” she  said. “You have to know yourself, first and foremost, and then know your gear.”

The biggest problem in the White Mountains, she said, is its accessibility.

“They can see the ridge, they’re driving through. They say let’s go on a hike, with flip flops and a 12-ounce bottle of water … thinking ‘I will conquer the mountain,’ and that gets them in trouble most every time,” she said.

Bales hasn’t been back in New Hampshire since 2019 but hopes to return for a visit soon.

“I may come back this summer,” she said. “I think I need back and maybe tip my toes in the Whites again.”