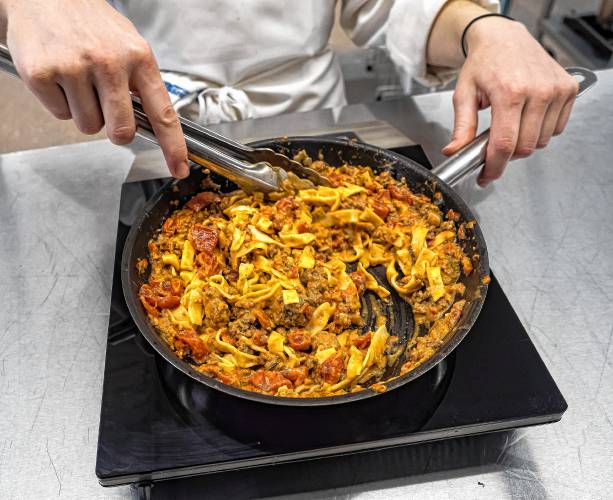 My brother is something of an electronics pack rat and I often get his hand-me-downs. I’ve learned not to be surprised when gently used laptops, routers, MP3 players and the like suddenly arrive in the mail, but his most recent gift was surprising.

It was an induction cooktop.

He and his wife had redone their kitchen and installed an induction stove. As is his habit, he wanted to share enthusiasm for a newfangled gadget.

Good timing, as it turns out, since along with electric vehicles and heat pumps for buildings, induction stoves are one of the main technologies fueling the “electrify everything” movement designed to reduce our contribution to climate change.

About the size of a phone book (back when there were phone books), the cooktop is an updated version of the old electric hotplate that you can plug into any socket. It has a single burner, although “burner” isn’t really the right term, that uses electromagnetic induction to heat up iron atoms in the pan without heating up the cooktop surface.

This approach means it uses much less electricity than old stoves that use resistance to heat up coils and, indirectly, any cookware atop them.

Induction technology has one big drawback, in that the pots and pans must contain iron – magnets must stick to them – and they have to make good contact with the surface. Our aluminum and copper-bottom pans are useless and one of our cast-iron frying pans doesn’t work terribly well because the bottom isn’t very flat.

Nonetheless, we use the cooktop almost exclusively now because it’s easy and clean, and we want to reduce our climate-change contribution. Our gas stove sulks in the corner, largely ignored.

But let’s hear from a couple of people who know a lot more about cooking than I.

“I find them a little underpowered … for things like searing, sautéing,” said William Walsh, a professor of culinary arts at Lakes Region Community College, which recently finished the COVID-delayed move of the department into a new building on the main Laconia campus. “They’re great for demo-ing but I wouldn’t want to do a whole meal on it.”

Like most professional chefs, Walsh is used to cooking on flames from natural gas or propane. Gas burners provide instant heat control and an open flame is necessary for such things as cooking naan bread and it makes using a wok much easier.

Around the country, chefs have been largely opposed to some cities’ desire to ban new gas hookups in response to climate change.

The college culinary program does use induction stoves, Walsh said, because for most things they’re just fine and they have a very big advantage in a classroom setting.

“They’re safer. There’s no open flame, no heat. That’s a real selling point of them,” he said. Induction stoves have long been used on cruise ships, where fires make people nervous.

“I have one in the kitchen in Concord, and two in the bake shop, for melting chocolate and stuff like that. They come in very handy,” said Robert McIntosh, the school culinary teacher.

Another big advantage over gas-fired stoves is their cleanliness.

“They are much cleaner, especially than propane stoves. Those throw a lot of soot if you don’t have the right setup,” McIntosh said.

Indeed, concern about indoor air pollution in kitchens has become a selling point of induction stoves, with recent research showing that gas stoves produce high levels of nitrous oxides, which contribute to asthma, and can leak methane, which aside from being a potent greenhouse gas isn’t healthy to inhale.

An induction stove may not even require a hood and ventilation fan, although there’s still smoke from the cooked food to deal with.

Like all electronic devices, current matters. A portable stove like mine that plugs into a 110-volt socket won’t generate the temperatures or heating speed of a unit wired into a 220-volt circuit with enough amperage to handle the load. I suspect commercial induction stoves would deal with most concerns about insufficient heat.

For a slapdash cook like me, the lack of a flame is a big plus – no more worries about accidentally igniting the potholder while cooking my morning egg – and I will appreciate the reduction of waste heat in our air conditioning-less kitchen this summer.

If you’re looking at a kitchen upgrade and are concerned about climate change (as you certainly should be), you should check it out. Even if you don’t have a brother to give it to you.