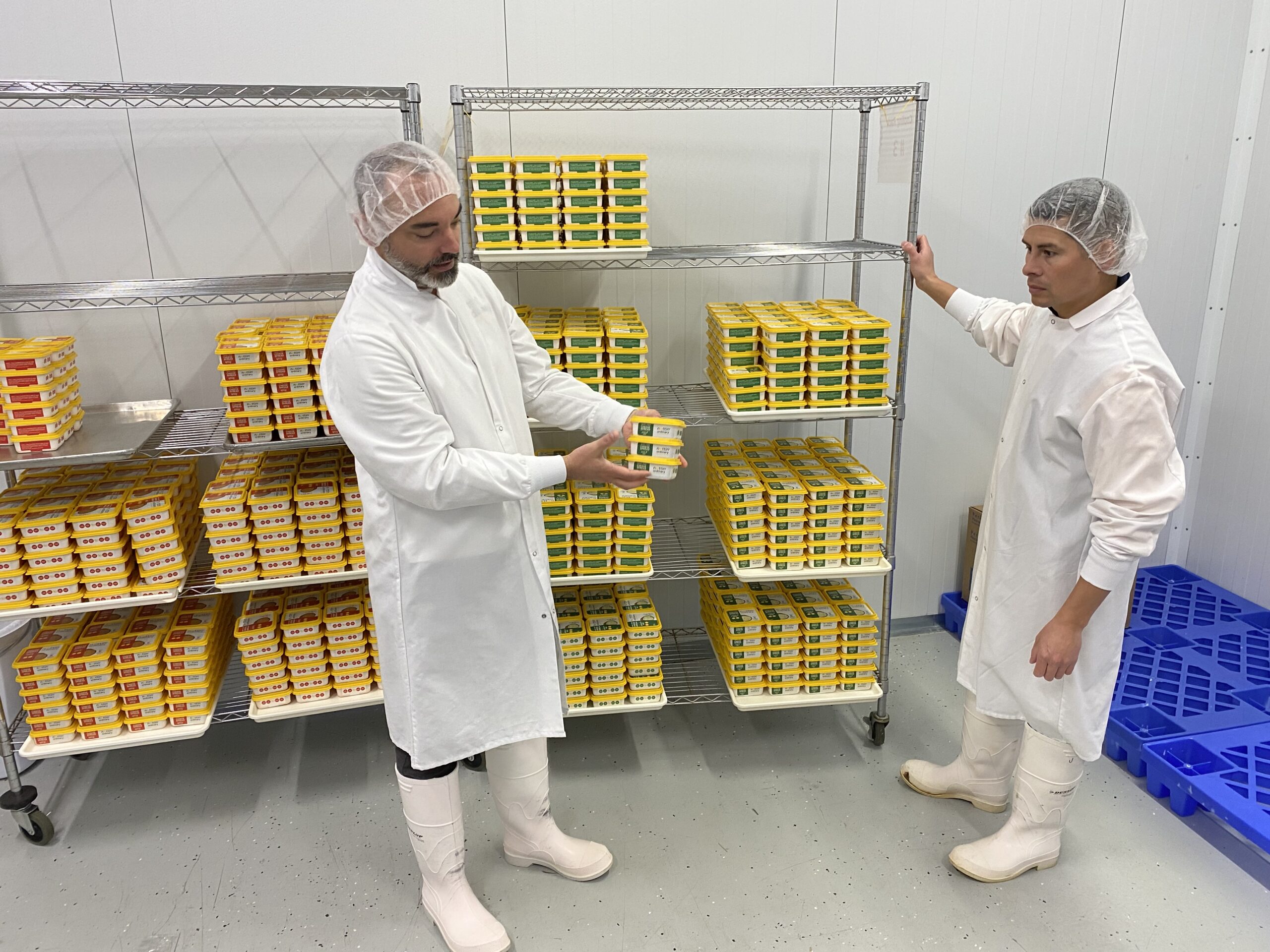 Founders Adam Hamilton, left and Josh Velaquez show some package of their cashew chees spread in the cooler at the Nuttin Ordinary facility in Peterborough, April 11 2022.

Start-ups always face unexpected issues when developing new products. Some issues are more surprising than others.

“It took us a while to find the right hand soap,” said Adam Hamilton, co-founder of Nuttin’ Ordinary, a small New Hampshire company making a creamy cheese spread out of cashew nuts, during a recent tour of their production facility.

“Sanitation is super important in food and doubly so for fermentation,” he explained.

Sanitation concern is one reason why my look at the 8,000-square-foot facility in Peterborough – part of an industrial park that, among other things,  previously housed a company that sold sex toys and left behind some interesting inventory when it went under – wasn’t very exciting: I couldn’t poke around during a production run because I’d be an extra source of contamination despite hair nets, lab coats and booties on my shoes. Plus I might spot some proprietary secret.

I visited Nuttin’ Ordinary (nuttinordinary.com) after learning of it from Business NH magazine because it’s a local example of a new industry that has been super-charged by concerns about climate change: Plant-based replacements for meat and dairy products. Long a niche product bought only for health and animal-welfare reasons, the market has exploded from concern about the climate emergency because it sidesteps the greenhouse gas emissions from raising cows, pigs and chickens.

“Beyond Meats lit the space on fire for us,” said Hamilton, referring to one of the high-profile entries in this culinary scene.

Reducing agriculture’s climate impact wasn’t the point when the other founder, Josh Velasquez, began experimenting with blenders in his parent’s basement close to a decade ago, although they’re happy if it draws more customers.

“People who are going dairy free – that’s changing. What else is in their shopping carts is changing a lot,” said Hamilton, responding to my stereotyping of liberal Peterborough rather than some of its blue-collar neighbors as being an obvious home for Nuttin Ordinary. “They’re not quitting dairy, they’re just lightening their load.”

It was health reasons that led Velasquez and Hamilton to become interested in vegan foods, which shuns all dairy products. They toyed with opening a vegan restaurant before deciding that lack of a good vegan alternative to cheese was a stumbling block.

They import cashews from overseas, grind them into a paste, add probiotics and ferment the result that, when mixed with spices, create cheese spreads or a cheese replacement used in frozen ravioli, which makes up about a quarter of current sales. Sounds simple but tweaking the bacteria, determining blending technologies and perfecting packaging methods has been a half-decade process that is still going on.

The company, which has five employees including the founders, has raised $800,000 locally, including friends and family. They’re crowdfunding for investment to be used in sales and marketing, and are well on their way to the point of profitability with around $2.2 million in sales. The company’s four mixes of cheese spread are sold at Wegmans, Market Basket and Whole Foods supermarkets, among other places.

Their current facility, which they designed themselves, has room for expansion clear to $20 million in sales. Velasquez, a New Hampshire native, has bigger dreams.

“There should be a robust food ecosystem here –  selfishly in southwest New Hampshire but really New England as a whole,” he said, ticking off places like California, Colorado and most recently Austin, Texas, as examples. “If we can do this here, maybe we can inspire others that they can do it too.”

Nuttin’ Ordinary’s process  puts them at the traditional end of the plant-based food spectrum, since it’s roughly the way tofu has been made for 2,000 years. It also leaves room for arguing about the environmental benefit: Although cashews aren’t usually irrigated and don’t have the impact of almonds, they are a tropical fruit that must be shipped in from Latin America or Southeast Asia. Balancing that against cheese made by a local dairy, which produces bovine emissions but involves less transportation, is a greenhouse-gas calculation that stumps even experts.

But there’s no question that the climate-change discussion has made some people in omnivore societies look anew at the idea of replacing food produced by animals with food produced by plants. (Many of the world’s Hindus, Buddhists, Sikhs and Jains are asking: What took you so long?)

Plant-based meat substitutes are still very niche, although the variety has grown. They range from “cultured meat” grown from animal cells in a lab, to plant-based “ground beef” that is incredibly hamburger-like in taste and mouth feel, to non-meat “chicken” nuggets. All told they make up perhaps 1.5% of total meat sales in the U.S. according to industry estimates that I could find, and that includes long-established “veggie burgers” which are so-so at best.

Plant-based versions of dairy products are much more established in the U.S. Soy-based and oat-based liquid “milk” lead the way: about 16% of fluid milk sales in recent years did not come from cows. Plant-based cheese aren’t as well established but, as Nuttin’ Ordinary shows, are growing.

The climate worrier in me celebrates this change but the localvore doesn’t. My town has a a small family dairy that I, and everybody who isn’t directly downwind on certain days, just love. So even as I applaud reducing the climate impact of cattle, I mourn the possibility that events could push our farm under.

There are no easy choices, as they say.