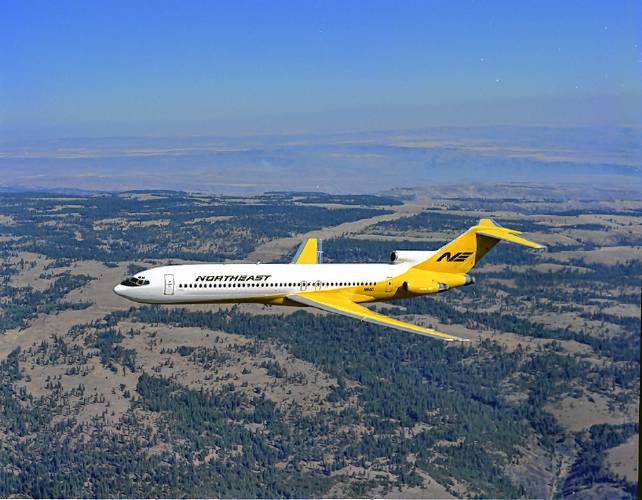 A Northeast Airlines Boeing 727 in flight with the "Yellowbird" paint scheme. A 50-year reunion of former employees, passengers and friends will take place on July 31 in Manchester. Delta Flight Museum / Courtesy

Old and old-ish people remember when civil aviation was fun rather than the nasty, brutish and long experience it is today. Airports and airplanes and pilots and stewardesses were exotic and admired, planes were linking the world together into one big happy family, and it was something special to take an airline flight.

(It was also expensive: Deregulation might have ruined the exotic appeal of flying but undoing tightly controlled monopolies made it financially accessible to many more people.)

Nostalgia for those pre-9/11-security days shows up most often in nostalgia over dead airlines. There’s a non-small group of people, for example, who never forgave a regional railroad for buying the Pan Am name and logo and sticking it on some grubby train cars.

For some folks in New England, Northeast Airlines with its bright yellow planes and earworm of a jingle really triggers the nostalgia. It brought scheduled plane flights to places as small as Concord, N.H., before it merged with Delta in 1972.

I know this because there’s a reunion planned to mark the 50th anniversary of that merger, put together by Jeff Rapsis, director of the New Hampshire Aviation Museum. As this Concord Monitor story explains, Rapsis has a good reason to be interested: His father was a Northeast Airlines pilot who was killed in a crash.

You can read the whole piece here.