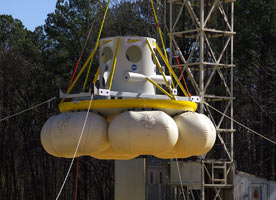 Twenty-five years ago, the Pathfinder mission landed on Mars using gigantic versions of auto collision airbags to cushion the landing. The rovers Spirit and Opportunity also used the same system. NASA hasn’t done it since, apparently because rovers have gotten bigger so they can do more, and bags to soften their landing would be so big and expensive as not to be worth it.

I know this because I wrote a number of stories at the time about Warwick Mills in New Ipswich, a historic textile mill that has actually stayed in business as a textile mill by switching to more novel fabrics. High-end sails for racing sailboats is one and “space inflatables” is another. They made the urethane-coated material called Vectran, which NASA says “has almost twice the strength of other synthetic materials, such as Kevlar, and performs better at cold temperatures.”