A musical two-fer: 1. The undignified end of old pianos … 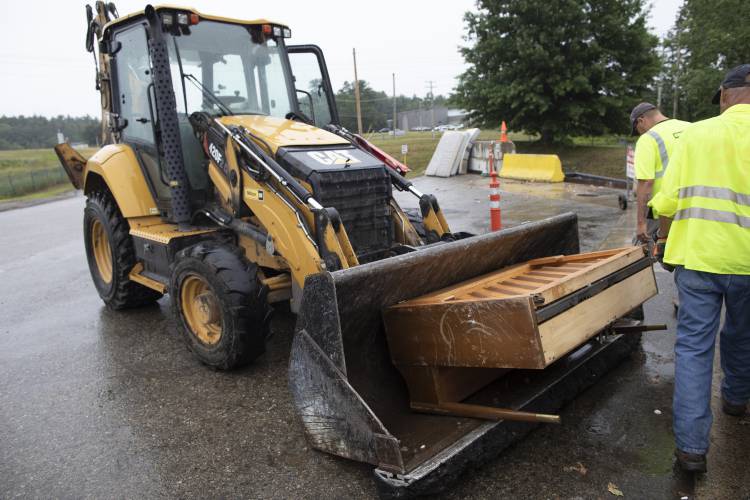 City of Concord General Services worker Will Cook dumps an old piano at the Trash and Recycling area of the Concord Transfer Station on July 19, 2022. GEOFF FORESTER

There is a certain sort of online for-sale ad, whether in the pages of the Monitor or placed on Craigslist or tucked into social media, that sounds kind of sad.

“Piano – still sounds great! The kids are grown and it doesn’t get played anymore. Give it a good home, just $100!” is a typical example, accompanied by a photo of a shiny spinet, or what might be called a baby upright piano.

“There are times I just come in and have to shake my head and go, ‘Nuh-uh.’ Tough love is best – just hit them in the face with it: This thing is junk,” said Mark Dierauf, who has been a piano technician and tuner and repairman in the Concord area for half a century.

Not junk as in unplayable. Junk as in not worth the cost and effort of making it good enough.

“By the time you pay somebody to move this and get it tuned – it’s been neglected, so there’s a lot of work – you’re easily into it for a thousand bucks. When they hear that, they quickly give up on the idea,” he said.

If you’re lucky, you might find a place like Littleton or Nashua that has a sidewalk piano program and they’ll take it, but this isn’t common.

What usually happens, as can be seen maybe once a month at Concord’s transfer station, is that the family’s formerly prize possession is sent to the dump. All 88 keys, each with hammer and workings; the big metal plate that makes pianos so hard to move; the hundreds of strings of varying weights and lengths; the soundboard and cabinet and pedals and fancy filagree music stand – all of them are unceremoniously heaved into a dumpster and eventually end up in a giant landfill, in Concord’s case at Bethlehem or Rochester.

Up until about a century ago, if you wanted music in your home, your best bet was to make it yourself, and the piano was probably how you did it.

In the early 1920s, almost 350,000 pianos a year were sold in the U.S., according to the Blue Book of Pianos, a definitive source of data for what was once the most expensive and complicated object in the average home. Most of those were upright pianos – big, boxy instruments that could be 6 feet tall and as beautifully made as your wallet could handle, decorated with expensive veneer and able to fill a house with music.

Then the radio was invented.

Suddenly, pianos weren’t necessary in every home and sales began to slip, falling to 220,000 by 1928. The next year the Great Depression came along, knocking annual sales to less than 100,000. There was a rebound after World War II when cheaper, smaller pianos that fit into suburban homes were developed, but that boomlet faded by the 1970s.

“The later smaller consoles and spinets that they started building in the 1940s and especially after the war, the quality dropped pretty precipitously … and it got worse and worse until the Japanese came around,” said Dierauf.

Told that I own a spinet, a piano that stands less than 4 feet high because the strings are doubled over in various ways, he sympathized.

“Spinets sound bad, there’s not much you can do about it. … They were usually made of cheaper materials, poorer workmanship,” Dierauf said, while the small frame and soundboard limits their tone, timbre and volume.

(Fortunately, my playing is equally bad, so there’s no real loss.)

These days fewer than 25,000 acoustic pianos are sold each year in the U.S. Most are higher-end models, including grand pianos.

The point of all this history is that there are an awful lot of pianos out there that are ready to give up the ghost, whether robust uprights from the 1920s or cheaper spinets from the 1960s, and that has created a glut on the market. No wonder you can’t find anybody to take grandmother’s beloved Baldwin.

Dierauf had this comparison: “They’re kind of like cars. If you can imagine having a car that old, if it worked at all it would be a miracle. They keep sort of functioning but there’s nothing musical left of them, but it’s expensive to keep them maintained. They’re just money pits.”

Even the parts aren’t worth anything

Years ago I owned an old player piano salvaged from a neighbor’s barn. The pneumatic player function didn’t work, but it was cool to look at.

Eventually, so many innards broke that it couldn’t be tuned and I had to junk it, but not before salvaging the intricate workings of the player with scores of little bellows driven by chain drives and gears. The whole contraption, all 20 pounds of it, is sitting in a closet while I try and figure out what to do with it. I’ll probably end up junking it when I downsize.

This leads to another disappointment: Not only is your old piano worthless – even the components are worthless.

The one possible exception is the keys, which might be useful to restorers who need to replace a chipped or broken key.

If the piano is old enough to have ivory on its white keys – black keys are made of wood or plastic – that complicates things. Since 1975, it has been illegal to sell ivory as part of federal laws to protect elephants, so ivory-covered white keys can be sold only if they’re in the original piano. You can apparently give them away to restorers of antique pianos, but double-check before you proceed.

Ivory keys are often slightly discolored with time. If your piano keys are all still gleaming white, they’re plastic.

Pianos are big and heavy, so they don’t make good collectibles. That doesn’t stop a few people from collecting them.

“I have 40 pianos,” admitted Slaughter, including a bunch out back that have fallen apart. He’s not alone. “We just cleaned out somebody, cleaned out his barn. We filled like eight huge dumpsters with pianos.”

The close-knit piano technician community can point to more than a few people who have filled sheds or barns with pianos of all sizes and conditions that they encountered on the job and just couldn’t bear to see junked.

And then there’s Gene Roe of Greenville, who has a warehouse with more than 300 pianos in Massachusetts. He has been the subject of news coverage and even a YouTube video in which he shows off just a smattering of his collection. He also tuned my piano a couple of times but that was before I knew of his accumulative proclivities.

Pianos get saved because they die so slowly. It’s alarmingly easy for a lover of the instrument to think it’s not quite time for landfill euthanasia.

“It’s a lot easier to just say yes and take one in,” said Dierauf, sounding like somebody who goes to the animal shelter and ends up with too many cats. He looked back on his youth before he hardened his heart and learned to say no: “Very quickly, in the matter of months, I had 12 of them. I knew I had to stop.”

Slaughter agreed. “It is hard to say that this is really at the end of its life. … If it’s a decent console – newer, in good shape –I’ll try to resell them.”

There’s one other complication to the piano ecosystem: Digital keyboards.

Starting in the 1980s, these increasingly intricate but relatively inexpensive – and easy to move – devices delivered a blow to piano sales. They now outsell acoustic pianos by about 6-to-1 in the U.S., according to data from the Statista website.

Dierauf points to St. Paul’s School, where he took care of the pianos for three decades.

“When I left, St. Paul’s got rid of all their pianos, went with digital stuff,” he said. “Maybe they’ve kept a grand for performers, I don’t know.”

Digital keyboards have completely taken over the lower end of the market, serving people who would previously have bought used pianos.

“You’ve got to do a lot of work to get a piano” as compared to a keyboard, said Dierauf. “You don’t go to Best Buy and get a piano and throw it in the back of your sedan and set it up and play it. It takes commitment.”

That’s part of the reward, he said.

“If it’s too easy, you don’t value it. If you get (a digital keyboard) as a replacement for a lousy acoustic piano, I don’t think you’ll stick with it.

“I do have to say that most of my serious customers are my age or older. I do have some customers with kids that are playing … but once they’ve gone off to college, they stop – they have too much going on in their lives. I do see those people coming back, but I worry there aren’t enough young people replacing the old people dying off.”

But as you can see from the country’s piano sales, which have been consistent for a decade and even got a boost in the pandemic, there are still a lot of people who want the feedback of pushing down a key that moves a hammer that strikes a string that vibrates the air in a carefully shaped box that comes out as, amazingly enough, music.

That’s got to be worth something – even if it’s not money.