Hiking to find Big Trees (with a guidebook) 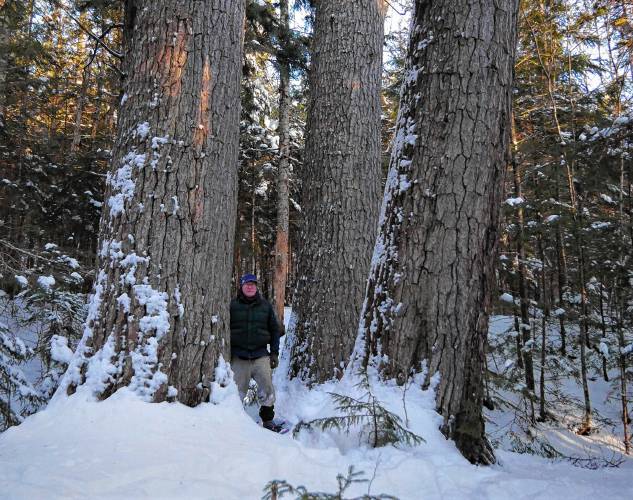 It sounds deep and zen-like to say it’s the journey rather than the arrival that matters but let’s be honest: It’s more fun to end up somewhere interesting.

Trees are awesome creatures even if you don’t hug them – but for me, the larger they are, the better. A truly giant example is worth some effort to see, so I’m happy Kevin Martin of Epping is about to release a guide called Big Trees of Northern New England with the subtitle “Short Hikes to the Biggest Trees.”

He has been state coordinator and Rockingham County coordinator for the New Hampshire Big Tree Program, the state chapter of a national program that seeks to identify the largest example of each tree species in the country, in each state and even in each county.

I’ve written about this program a few times, partly because New Hampshire’s chapter is top-notch. For example, they’ve been measuring some trees regularly since the 1960s and have records of growth rates over time to assist with research into estimating how old a tree is. The common horse chestnut, if you’re wondering, grows about four times as fast as a cottonwood.

“We do pretty good in New Hampshire with our database compared to other states. We keep track of them quite well,” said Martin.

Martin, 66, got into the big-tree scene indirectly. He was a woodworker who transitioned to building and restoring canoes – some of them are just gorgeous – so he approached large trees only as a valuable resource.

“I always look for big logs from big trees to get clear lumber. I’d see the trees at the sawmill, pick them out from there,” he said. But when he helped build a house overlooking the Lamprey River and got involved with local conservation commission, “I looked at them in a different light.”

Martin has spent decades checking on big trees to see how they’re doing, looking at candidates people have submitted, checking on hints from old records (borders between property are good because trees were left as markers, and sometimes old deeds will list something like “big oak tree” as a boundary marker). Often, he wanders the woods looking for new specimens.

This is trickier than it sounds because for certain species, “big trees” aren’t all that big. The state champion common baldypress, for example, is only 21 feet tall. You could stack five of them on top of each other and the state butternut champ would still look down on them.

A side note: Certification as a big tree depends not just on height but on the circumference of the trunk and the width of the crown. If you’re super tall but skinny you’re not “big,” sorry.

Technology has made these measurements a bit easier. The existence of laser finders makes determining height and crown width more exact, although there’s still skill needed in determining exactly which of the many tree branches mark the highest and widest points.

Over the years Martin has had to learn a lot about tree species identification as well as natural history – which trees like wetlands, which like acidic soils, which like open areas – and even the history of logging, to know which species were left behind because the wood isn’t good for lumber.

But we don’t have to know any of that to use his hiking guide, which is a follow-up to a 2014 guide to big trees in New Hampshire. This one covers Northern Massachusetts, Vermont and Maine.

Lots of champion trees are hard to find, deep in the woods or wetlands, or on private property where guidebook-toting strangers aren’t welcome.

Some of the hikes are really short, like the enormous honeylocust that’s right on the grounds of the Saint-Gaudens National Historical Park in Cornish. But he’s got many hikes of a few miles if you want to stretch your legs.

Martin has taken pity on the direction-challenged among us, making maps for each hike and including GPS coordinates. He also includes information on big trees, on the sometimes competitive nature of getting your tree listed, and techniques to see if you’ve got a champ growing in your Back 40.

This is a self-published book. Martin hopes to cover his cost and maybe make a little but he notes “book writing is like boat building – there’s not a lot of money in it.”

The book will be released this fall via Pathway Book Service (pathway.com) and sold in local bookstores.

The New Hampshire Big Tree Program is online at extension.unh.edu/natural-resources/forests-trees/trees/nh-big-trees

You can learn more about Martin’s canoe restoration at kevinmartin.wcha.org/