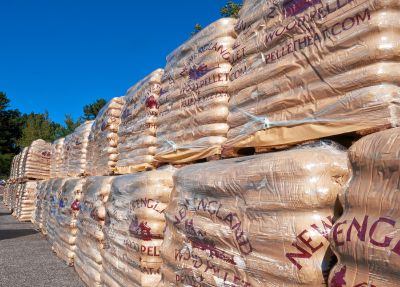 The price hikes and supply crunches that have clobbered fuel supplies and raised prices throughout the world are starting to affect the one fuel we can call our own: Wood pellets.

“There is quite a bit available right now but with the ongoing situation, there might be a rude awakening. … We’re preparing for the fact that we might not have all our brands available this winter,” said Lee Hughston, manager of Osborne Agway in Concord.

The supply situation is dicey enough that the national Pellet Fuels Institute is cautioning users who depend on them to stock up soon. Hughston said Osborne Agway is giving the same message: “We encourage our regulars to do it early.”

And even though there is no shortage yet, the possibility of one combined with pressure from high diesel prices and labor shortages is showing up in higher prices.

“We used to have quarterly issues on pricing. Now the mill is calling essentially the first of each month … with $10 or more a ton or $20 a ton,” Hughston said.

He pointed to local hardwood pellets, a staple of the New Hampshire market. “Right now it is $330 a ton, almost $50 higher than this time last year.” And more increases are likely.

More pressure comes from increased demand. The sharp spike in the cost of heating oil, used by about 40% of New Hampshire homes, propane and electricity has raised interest in adopting at least supplemental heat from a pellet stove.

“A  lot of people are new, coming into it to get away from ‘Our electric bill has basically doubled in cost, oil has gone up.’ People are looking for alternatives,” said Kyle McGarr, assistant manager at Stove Barn on Loudon Road. “Last year, a lot of gas fireplaces were being sold; this year it has jumped from that to wood and pellet stoves.”

The existence of a 26% federal tax credit for sufficiently good wood or pellet heating systems is also an incentive. The New Hampshire Department of Energy’s Sustainable Energy Division also provides a rebate payment of 40% of the price of high-efficiency bulk-fed wood-pellet boilers and furnaces, capped at $10,000 for homes.

But there’s a problem for these newbies: Many stove manufacturers are back-ordered, often by months. If you try to buy one now, one store manager cautioned, you may not get an installation until well into winter.

Most pellets in New England are made either out of low-grade wood left over from logging operations or from sawdust and other wood byproducts from mills and manufacturing. Cutting down mature forests to create biomass for heating and power production, an issue that is causing an uproar in Europe, is not usually done here.

Local sources of raw material for pellets are under pressure, however. High diesel prices led many loggers to cut back on operations this summer, reducing the supply of wood from forests, while the rise in interest rates is affecting home building, the source of a lot of wood residue for pellet mills. And that’s not all.

“The bigger issue, quite frankly, is labor,” said Brett Jordan, CEO of Lignetics. The Colorado firm has pellet mills throughout the country including the New England Wood Pellet mill in Jaffrey that the company bought in 2018.

“We can’t take plants to 24/7 because we don’t have enough headcount. We’re hiring everybody we can hire but it’s not enough,” he said.

A more unlikely problem is the one that has roiled fossil fuel markets: The Russian invasion of Ukraine. The war has reduced supplies from Russia and Belarus even as the Russian cutback on natural gas and oil has made biomass heat and power more desirable. The result is that European nations want to buy a lot more wood pellets from the U.S.

“We get phone calls every day from people looking to export pellets to Europe,” said Jordan. “I would be shocked if we didn’t see a lot of players in our industry dedicating at least part of their capacity to export.”

With its hardwood forests New England doesn’t typically export much in the way of pellets. Southern states, where huge pine estates are grown specifically to become fuel, is the nation’s leader. But New England states still could see a trickle-down effect in supplies if exports surge.

Pellets have revolutionized wood heat in the past decade because refueling can be controlled by a thermostat via augers feeding more pellets to the fire as needed. Wood pellet boilers have become a routine way to heat commercial buildings and wood pellet stoves are a common secondary source of heat in homes, much cleaner and easier than traditional wood stoves.

Even so, pellets or similar processed wood such as sawdust bricks are not a huge part of New Hampshire’s energy scene. The state says about 6% of homes use wood as a primary heat source, and much of that is traditional wood stoves. While messy and labor intensive, traditional wood stoves have a major advantage over pellet stoves: They don’t need electricity to operate so they can heat a house during power outages.

As for cost, current volatility in prices makes predictions difficult but pellets have been slightly cheaper on a per-unit basis than heating oil in recent years, according to an analysis by Eric Kingley of Innovative Natural Resource Solutions LLC. Using data from the federal Energy Information Agency and historical data on wood pellet prices from the New York State Energy Resource and Development Agency, he calculated that pellets have been as much as one-third cheaper than heating oil this year and as of August were about 15% cheaper.

In terms of heat produced as measured in British Thermal Units, a ton of wood pellets is equal to about 120 gallons of No. 2 heating oil or about 180 gallons of propane, according to federal estimates. At current prices the pellets are much cheaper than the oil – less than $400 vs. about $550 – but oil prices seem to have stabilized while pellets are still increasing so it’s hard to say how big the difference will be this winter.Web body