Panic!!! It’s only 18 months to the total eclipse! 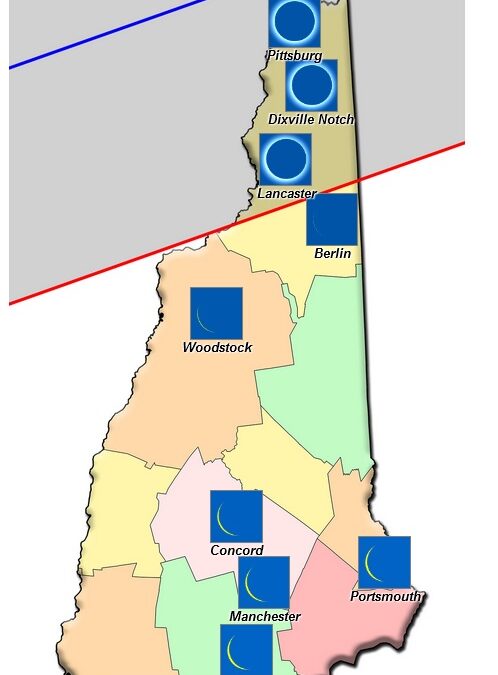 Thia illustration shows how much of the April 8, 2024 solar eclipse will be visible in NH. The Blue line is the centerpoint; the gray area reaching down to the red line shows locations where totality can be seen. The graphics in other cities estimate how much of the sun will be blocked. Eclipse2024.org

The biggest solar-eclipse booster in New Hampshire – perhaps the biggest on the Eastern Seaboard – has a confession to make: “I may have started a little early.”

Rik Yeames has been eagerly anticipating April 8, 2024, when a total solar eclipse will cross New Hampshire’s northern tip, since at least February of 2019. That’s when he showed up in the Monitor warning people not to wait until the last minute to prepare for one of nature’s great spectacles.

Expecting people to start preparing for something five years in the future was a little optimistic, he now admits, but that hasn’t stopped him from trying. Since that first article Yeames has overseen creation of everything from an eclipse song – “The Three of Us” based on Bill Withers’ “The Two of Us,” playing off the fact that an eclipse requires the sun, the moon and an observer – to turning his car into an EclipseMobile that visits schools and other locations as part of a “no child left inside” push. He admits that his wife is getting slightly tiredof it.

But the Concord resident says it’s no time to slow down. “It takes years of planning!” Yeames cried during a recent enthusiasm-filled visit to the Monitor newsroom, accompanied by posters, documents, lists and a recording of that song.

Here’s what has him worked up: He’s afraid New Hampshire will miss out. He points to Houlton, Maine, which is already organizing a series of eclipse-themed events and preparing to handle thousands of eclipse tourists. New Hampshire has declared April 8, 2024 as Solar Eclipse Day and the state’s travel website, VisitNH.com, has an eclipse page but that’s about it for official preparations.

As a sign of what we’re up against, I tried to book a room in Pittsburg for the eclipse but the site’s software only extends one year in the future; it can’t handle a 2024 reservation.

“I know!” Yeames cried in frustration when I told him. “I’ve told (hotels) – get out a piece of paper! Write it down! Take their money!”

Yeams, who owns Concord’s two Domino’s pizza restaurants, got a taste of eclipse mania in August 2017 when a partial eclipse came through Concord. There was a scramble to get enough of those funky-looking, cardboard frame eclipse glasses and his restaurants had stocked up in advance.

“I had more people call for (eclipse) glasses than I did for pizza in the two weeks leading up to it,” he said.

Solar eclipses, when the moon gets directly between us and the sun, occupy a relatively small area in comparison to a lunar eclipse, which can be seen by almost half the globe. The moon’s shadow in the 2024 total eclipse will sweep across the U.S. from Texas through northern New Hampshire and into Maine.

Totality will be visible for several minutes from the northern tip of the state down to about Lancaster, while the entire state will see a partial eclipse. Concord’s view will be better than the 2017 eclipse when 62% of the sun was blocked by the moon here.

I have seen a couple of partial eclipses, away from the centerpoint of the shadow, or annular eclipses, when the sun turns into a glowing ring but never quite disappears. But I’ve never seen a total eclipse and by all reports they are a life-changing sight. I can’t wait.

If you were here in 2017 you’ll remember that the partial eclipse was great. We gathered in happy crowds and shared stories and wore silly glasses or put special boxes on our heads so we could watch without getting blinded. It was the sort of community-wide, gleeful celebration that rarely occurs anymore.

Preparation may start to pick up steam now. Appalachian Mountain Club and the New Hampshire Solar Eclipse Task Force (on which Yeames, naturally, is a leader) are holding a workshop for educators, officials and others on Oct. 27 and 28 in Bretton Woods. There are teacher conferences in the works and plans for an eclipse-themed time capsule that would be opened when the next solar eclipse comes through in 2079.

So start getting ready; it’s not too early.

And one more thing: Pray that it doesn’t rain.