Football? Boring! Soil judging is where the action is 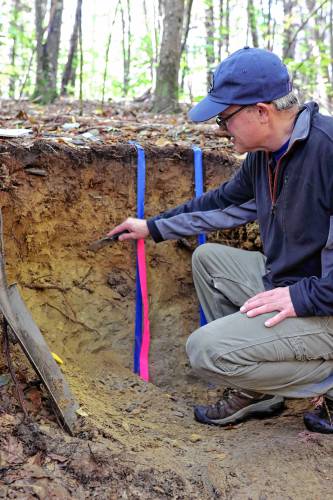 I will never use the phrase “common as dirt” again. My cliche vocabulary has been expanded.

These are terms I learned after stumbling across an intriguing contest held this month at UNH’s Kingman Research Farm in Madbury: Interscholastic soil judging.

“It’s all about describing the soil, its physical characteristics. Is it sandy, loamy, clay? Is there a high water table? Can you see the bedrock? Is it glacial till or marine sediment? Can you evaluate what uses the soil can be good for?” said Alena Warren, manager of the Stafford County Conservation District, who organized the contest.

The contest has been held for decades but is just starting up again after the pandemic squelched it, which is why only Moultonboro Academy’s AP environmental science class attended the Oct. 6 event. Next year should draw more schools and see the return of serious subsurface student scrimmaging.

You can learn more about it here: straffordccd.org/resources/soil-judging

By the way, this isn’t some weird New Hampshire thing. Do an internet search for “soil judging contest” and you’ll find them held on every continent. The U.S. even has a National Collegiate Soil Judging Championship. It was won this year by Virginia Tech, whose PR department boasted that the school won individual, group and team awards, the first such sweep since 2015! Sports desk, take note.

The contest at Kingman Farm was pretty straightforward. Pits roughly four feet deep were dug at various spots on the farm, big enough for a couple of people to get in them at the same time and examine the cross-section of different soils.

“This is kind of a unique spot, that’s why we do it here. There is glacial till, glacial outwash and marine sediment solids within walking distance, and within those three categories there are places with high water table, different drainages,” said Warren.

Soil samples were dug out so students could touch and smell them – maybe taste them, too? – to make some judgments. Conservation folks and soil scientists were on hand to grade results and, more importantly, answer questions.

The goal of all this is to help the teens understand what is happening underground from obvious signs such as sandiness and not-so-obvious signs such as redoximorphic features (“like rust stains in the soil”). That, in turn, helps them make decisions about how and whether to make use of the land.

“People think it’s pretty eye-opening that you can get all this information just from digging a hole,” said Warren. “It exposes kids to different careers they might not have known about: soil scientist or researcher, a house-builder, road builder, septic installer, forester – all these people need to know these things about soil.”

And farmers, of course.

There’s a saying that all of human civilization depends on six inches of topsoil and the right amount of rain. This column has talked about rain more times than I can count but has never really delved into dirt. Shame on me.

As soon as this is filed I’m going to grab a shovel and head out to my field, see if I can differentiate between loamy sand and sandy loam because apparently they’re different.