Can pre-fabrication speed up housing? 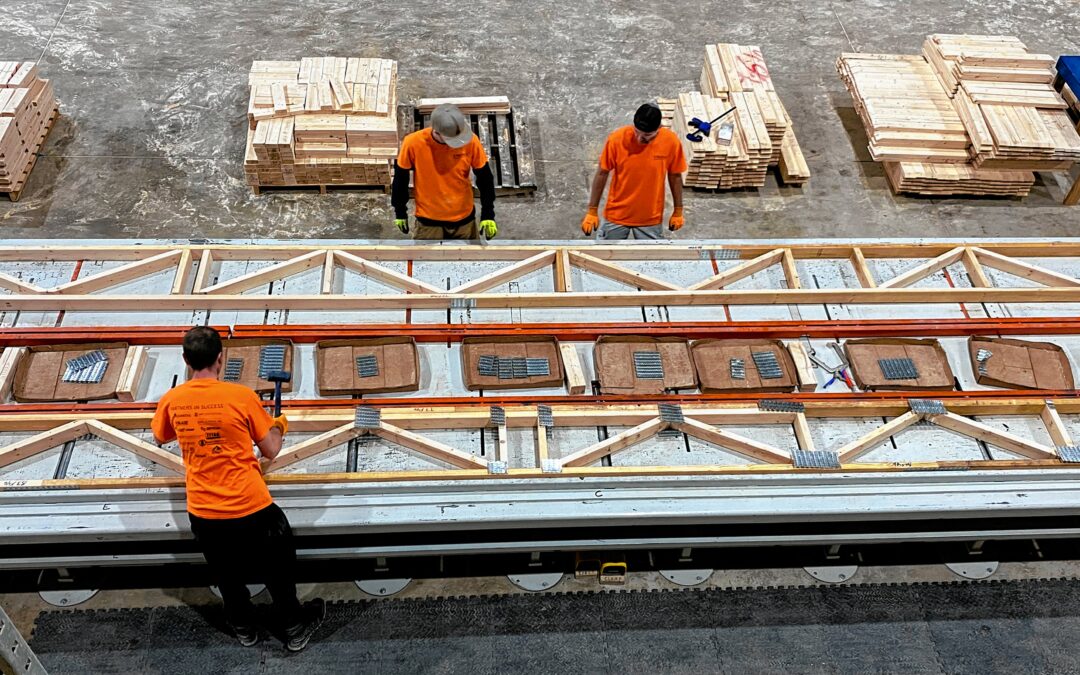 Everybody agrees that New Hampshire, like most of the industrialized world, needs more housing. Everybody also agrees that it’s hard to find enough skilled craftspeople to build the housing and that the result is too expensive.

A partial solution exists, however: pre-fabrication, or building the various parts of the structure in a factory and assembling them on site. In individual housing, this is rare and carries the unfair stigma of low-rent trailers, but for apartment buildings it is becoming more common.

“For anything that’s 100,000 square feet and up, prefab will make a lot of sense,” said John Tauriello, president and CEO of Wallace Building Products.

The 21-year-old company builds roof trusses at a plant in Pembroke and wall panels at a plant in Danbury, with a small design office in Claremont. Much of the time they assemble them at the site of apartments or commercial buildings, creating the building frame that in traditional “stick-built” construction would have been assembled, piece by piece, by individual construction workers outdoors.

Like everybody else, their business was whipsawed by the pandemic – hotel construction in particular disappeared – but demand for multi-family did not drop at all. They faced disruption in supply chains as lumber mills curtailed production, with lumber and plywood prices spiking by as much as four times, but have kept going.

“We probably framed about 2 million square feet last year. At least 75% to 80% of that was multi-family,” Tauriello said. “That’s the driver right now.”

Business is good, he said, for a reason that will resonate with almost anybody who has to hire staff.

“What’s driving growth overall of prefab, particularly up here in New England, is availability of construction labor and labor skill levels,” Tauriello noted. “If you look at somebody stick-building a house or a commercial building 20 years ago, you might have four skilled carpenters and one helper. … Today, you’ve got maybe a couple people that are skilled carpenters and a half a dozen helpers. You need people who are skilled at reading drawings, understanding sequencing, etc., and they’re hard to find.

“One way to mitigate that is prefab.”

A visit to the Pembroke plant shows the essence of prefabrication. A large manufacturing floor filled with conveyor belts, cranes and loading areas lets a relatively small team build trusses – those triangular cross-braced support systems for roofing – in an assembly line-like process.

“When I first started at Wallace, we were stick-building under a roof. We had chopsaws, nailguns, cutoff saws – basically the same type of tools you’d see on a job site. Today, we essentially extrude walls,” Tauriello said.

About 10 people work in Pembroke, and the company is hiring. The larger Danbury site, which makes walls, has about 20 people in manufacturing and is more automated.

“We prefabricate minor and major subcomponents. A major subcomponent might be an entire window opening” while a minor subcomponent could be a single cut stud, he said. The operator loads the components into the extrusion machine, makes sure they’re squared. “The machine reads from a CAD (computer-aided design) drawing and tells the operator what’s needed next. … The operator puts the components in, makes sure they’re squared and jigged, and when it’s ready to go, they hit buttons with two hands for safety. (The machine) nails the section and moves it forward.”

After inspection, the wall goes to an automated machine that nails on plywood if it’s an exterior wall.

It’s not totally automated, he said. Hands-on human oversight is needed. Asked about robots like those used in automobile assembly lines, Tauriello was dubious.

“Not in this industry, where the economics are at the moment. Robots are very costly and it’s slow,” he said. “I’m sure that eventually robotic manufacturing will become more prominent but the wood-framing market is just not there yet.”

But using some automation and CNC machines to help trained employees has benefits.

“It shortens construction duration. The faster you can get your project to the point where it generates income, the better,” said Tauriello. “It requires fewer carpenters to interpret drawings on site, and there is significantly less waste in the process.”

Wallace Building Products was founded by Bill Wallace in 2001 in Danbury. Tauriello purchased it in 2012 and refocused on commercial and multi-family. “It has grown to about 10 times the size when I bought the company,” he said.

Annual sales are in the $40 million to $50 million range, with 50 people directly employed and up to 250 people indirectly involved at any time, including contractors assembling framing on construction sites.

In 2021, the company formed an Employee Stock Ownership Plan or ESOP and is en route to being 100% owned by the employees. This program gives shares of company stock to employees once they have worked there long enough. An ESOP is similar to a retirement program with tax benefits for the company and workers and is often created as an incentive to lure and hold onto employees. There are roughly 180 ESOP companies in New England; the largest in New Hampshire is probably Hypertherm in Lebanon.

As for the future, Tauriello said he thought that the extreme housing crunch is forcing communities to look at why it’s so hard to build apartments in New Hampshire, which of course would be good for Wallace.

“I think local governments are becoming more lenient, with a stronger consideration to increasing density.”