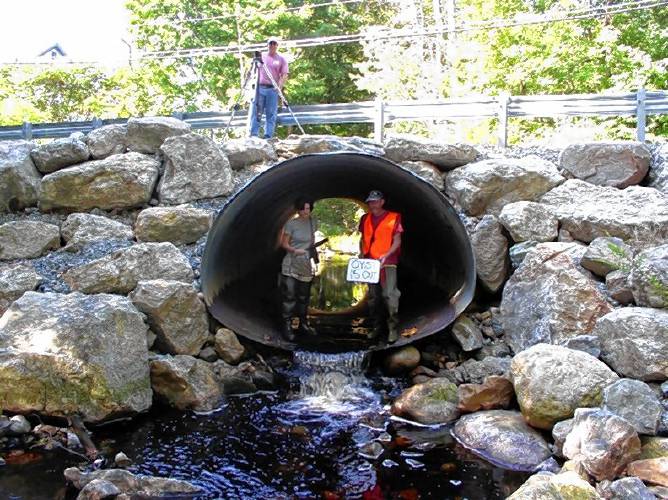 This enormous culvert was washed out during floods in 2006, cutting off access to roughly 100 homes in Barrington. This photo was taken a couple years before the flood during culvert assessment. Nature Conservancy / Courtesy

Here’s a sentence I didn’t expect to hear during an interview: “That’s why, all of a sudden, people are talking about culverts.”

This might be a bit of an exaggeration – OK, it’s a wild exaggeration – but the statement from Rachel Rouillard, director of conservation strategy at the Nature Conservancy in New Hampshire, contains some truth. The lowly culvert, usually consisting of a rusting metal pipe carrying water under the road in such small amounts that you don’t even know it’s there, is suddenly getting attention.

The spur is $1 billion in grants over five years under the federal infrastructure law to help local, state and tribal governments remove or upgrade culverts. There’s nothing like money to make people sit up and take notice. I hope your town is preparing applications for some of these investment funds.

The other thing that makes people take notice is when the culvert gets washed away and a road is suddenly closed.

I called Rouillard because the Nature Conservancy has long been a leader in upgrading culverts. Their interest is often environmental, since a culvert that is too small or badly designed can block the movement of fish, insects and other organisms important to an aquatic ecosystem, but they’re also concerned about keeping culverts intact.

“People are seeing it more because we’re getting intense storms … and we don’t have the infrastructure prepared to handle the kind of volume we’re getting, the storms of increasing magnitude,” she said.

Rouillard pointed to one such case that the Nature Conservancy was involved with. The Mothers Day floods of 2006 overloaded an enormous culvert under Route 4 in Barrington and left a community of some 100 homes without any way in or out for at least three days.

This culvert was the biggest corrugated-metal pipe I’ve ever seen – at roughly 7 by 9 feet in cross-section it was larger than some apartments I’ve rented. Even so, it couldn’t handle the huge increase in water that the storm created in a brook that’s normally so small I can’t even find its name.

The culvert filled up and the rushing water overtopped it, eating away at the road and the sand/soil around the pipe until the whole thing collapsed, closing the only road into a large development. It has been replaced by a small bridge.

The climate emergency has already increased the number of times this sort of thing happens, with massive rainfall causing havoc around the world – the phrase “1,000-year flood” is starting to show up in news reports. The situation is only going to get worse because warmer air holds more moisture that can be dumped at once. Culverts built to handle the watershed fluctuations that were typical over the past few decades are increasingly going to be too small.

Alas, upgrading a culvert that hasn’t yet failed is a tough sell to your select board or city council, even though replacing them after they failed is considerably more expensive. The federal grants should help a lot.

New Hampshire Department of Transportation is in the process of ranking the state’s many, many culverts – I don’t know how many there are but Concord alone has 533 of them, one for each 2,103 feet of road in the city – to prioritize upgrades.

“There are many factors: how much traffic is on the road; the condition of the culvert; the type of material – metal culverts bottoms rust out, face much quicker failure time than a concrete culvert with rebar in it, even though it has gaps in it,” said Kirk Mudgett, a state Department of Transportation engineer and project manager for the the replacement of a old stone box culvert under Route 1A in Rye. “Climate change does factor in. More recently recently we’ve updated storm data in our models, and Rye specifically looks at sea-level rise.”

That last point is important. Culverts in the Seacoast area are the most threatened of any in the state since many face water from two directions – rainfall rushing from the west and tidal surges coming from the east. They face a climate change double-whammy.

Incidentally, I found when talking to Mudgett and Rouillard that you shouldn’t just enlarge culverts willy-nilly.

For one thing, the changing climate isn’t having the same effect on stream flow throughout all of New Hampshire. “It varies around the state. Not all of them have increased greatly,” said Mudgett. “It’s a little surprising. It has really picked up in parts of the state in the past 10 years, in other parts of the state there’s been hardly any change.”

More importantly, enlarging a culvert can do as much harm as good if you’re not careful. The increased flow-through might wash out the next culvert downstream in a flood, and maybe losing that second culvert could do more damage.

“We do have to consider (downstream culverts). There are certain rules when upsizing to try to fit the natural stream shape,” said Mudgett.

Despite the complications, however, upgrading our often-invisible culverts is worth it.

“There’s a benefit to nature, to people, and cost-effective – there’s a triple bottom line,” said Rouillard.