Carbon nanotubes found in children’s lungs – how much of a problem is that? 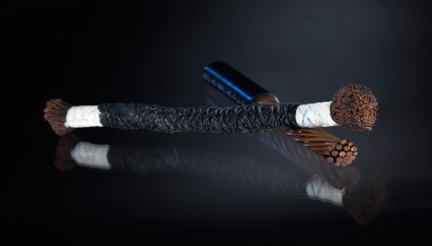 Nanocomp Technologies: One of their wires made with carbon nanotubes.

Carbon nanotubes – rolled-up tubes made of carbon atoms at the billionth-of-a-meter scale – are the poster child of nanotech, since they are very strong, very light, and they conduct electricity, making them a very interesting material to work with. Concord’s Nanocomp Technologies, which manufactures nanotube-based fabric and thread, is New Hampshire’s big entry.

But carbon nanotubes are also a poster child for health concerns about nanotech – that  these are so small and unusual that they will bypass the body’s defense mechanisms which have evolved to deflect bigger particles. So it’s worrying that carbon nanotubes have turned up in the lungs of children living in Paris, the first time they have been detected in humans. Here’s a New Scientist story.

To investigate, Fathi Moussa and colleagues at the University of Paris-Saclay, France, studied fluid from the airways of 64 asthmatic children, and discovered carbon nanotubes in all of the samples. Five other children studied also had them in their macrophages – immune cells that clear unwanted particles – taken from the lungs. The level at which the nanotubes are present is unclear, as is their source, although the team found similar structures in dust and vehicle exhaust collected in Paris.

It’s possible that these carbon nanotubes are the product of burning fossil fuels rather than anything novel and high techy, which means we’ve been inhaling them for a century or more. It’s also possible that they aren’t actually carbon nanotubes at all, says the story.  But either way, this is an issue worth persuing – if a valuable new technology is going to create a new asbestos-like lung problem, the sooner we realize it, the better.