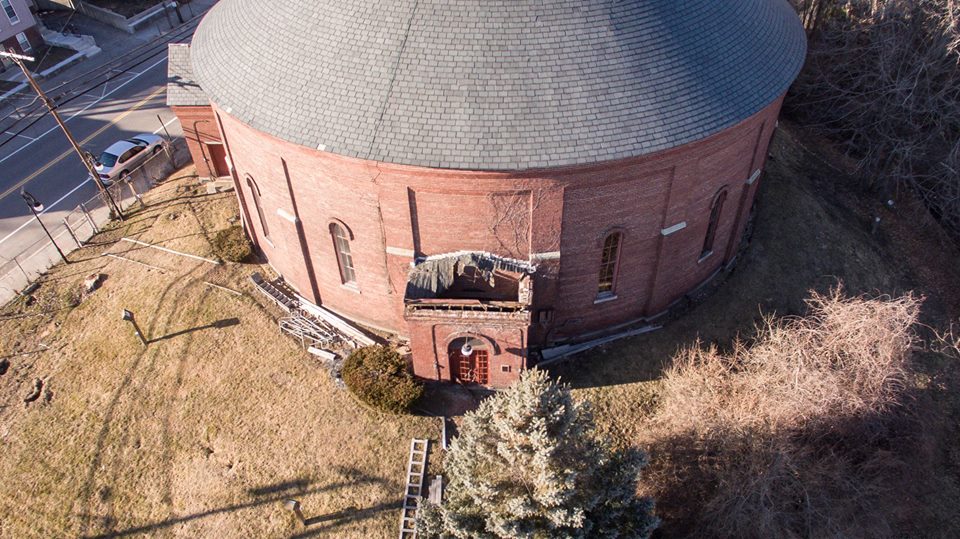 The Concord gasholder after the roof of its entryway collapsed. 2016 photo by Watt Woodfin, 603 Aerial Photography

There’s a really neat round brick building in Concord that once held coal gas or “manufactured gas,” the predecessor to natural gas that was made by processing coal. It has been abandoned for decades and is slowly falling apart – an entranceway recently collapsed, as I report today in the Monitor – and people are trying to figure out whether it’s worth the minimum of $500,000 and probably much more to save it.

I’ve written about the building in the blog before. The appeal to geeks and steampunk fans is the gas storage mechanism: The gas was stored under a giant upside-down cup, more than 80 feet across, that floated on water – the water created a seal which prevented the gas from escaping under the cup. As more gas was pumped into the cup, it slowly rose as much as 30 in the air; gasholder buildings are toll and round in order to hold these “cups” as they role and fell, depending on how much gas was stored.

The Concord gasholder is reportedly unique in the country because the storage mechanism is still intact – in all the other gasholders around the country that I can find, it has been removed or, more often, covered with cement to make the building usable. (You can’t allow crowds around inside when the storage mechanism is there because it’s not a safe, stable floor.) This creates an extra quandary in Concord: Even if the money can be raised to save the building, making the interior usable would require removing its one unique element.