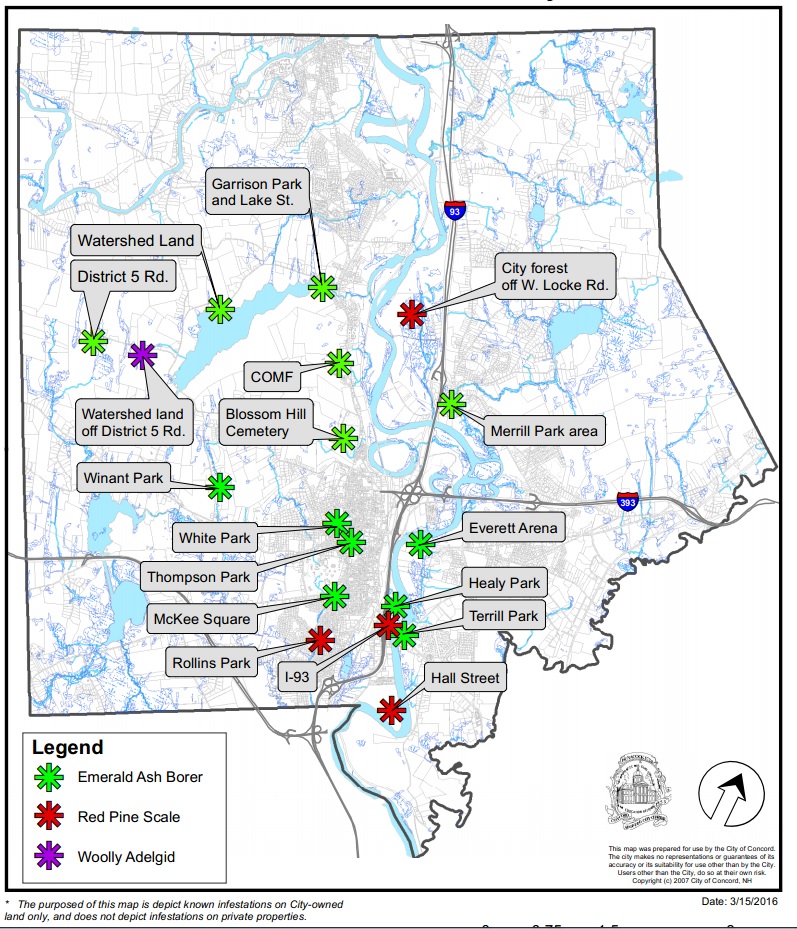 Two years ago, in May 2014, the N.H. Division of Forests and Lands released parasitic wasps at three sites in Concord and Canterbury in an attempt to control emerald ash borer (EAB) populations with natural predators (read more about the project here). (The map above shows locations of EAB and two other invasive tree-killing insects in Concord.) Bill Davidson and Kyle Lombard, forest health specialists, recently found some early signs of successful establishment of the EAB predators at one of the sites. Kyle told us, “We have evidence that the adult wasps we received from the USDA Animal and Plant Health Inspection Service found EAB larvae in New Hampshire and attacked it.”

They discovered two trees that had lifestages of the parasitoid Tetrastichus planipennisi, which attacks and develops on the larvae of EAB. The first tree had a few dead adult parasitoids within a year-old EAB larval gallery. This indicates that during the summer of 2014, an EAB larva was attacked by one of the released T. planipennisi and that the parasitoids were able to complete development on the EAB larva. It’s common for several dozen T. planipennisi to develop on a single EAB larva, so the occurrence of a few dead Tetrasticus adults that failed to emerge from the tree suggests that the remaining parasitoids successfully emerged from the tree.

ad two EAB galleries packed with dozens of live T. planipennisi larvae, as shown in the picture. This spring, these larvae will develop into adults and seek out more EAB to parasitize.

Kyle added, “We need to stop releasing parasitoids at the site and see if the population perpetuates itself without us continuing to add adults to the system.”