Emerald ash borer may not wipe out America’s ash trees, after all 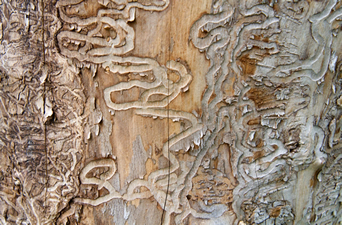 Ever since the emerald ash borer, an invasive beetle, burst out of the Midwest a decade ago, it has seemed obvious that it would wipe out all of North America’s ash trees, just as Dutch elm disease wiped out our elms. The expectation is that in a few decades the only ash trees will be sprouts that come out of stumps until they get big enough to attract beetles, plus a very few isolated adults. There are already programs to save seeds from various American ash species, to be replanted if we ever find a way to stop the borer.

But maybe not.  Studies in Michigan where the beetle has been established a relatively long time holds out hope that more adult ash trees may remain than we expect because the tree and the beetle reach an equilibrium before the trees are gone.

“It looks awful because the big trees are all being killed, and in terms of it ever looking like it did before the emerald ash borer came through, it’s probably never going to happen,” Kashian said. “But the species does not – at least based on what I’ve seen – look like it’s going to disappear, which is what a lot of people were predicting.”

The whole story is at Great Lakes Echo from Michigan State University.