NH is the nation’s bitcoin-machine leader – hooray (I guess) 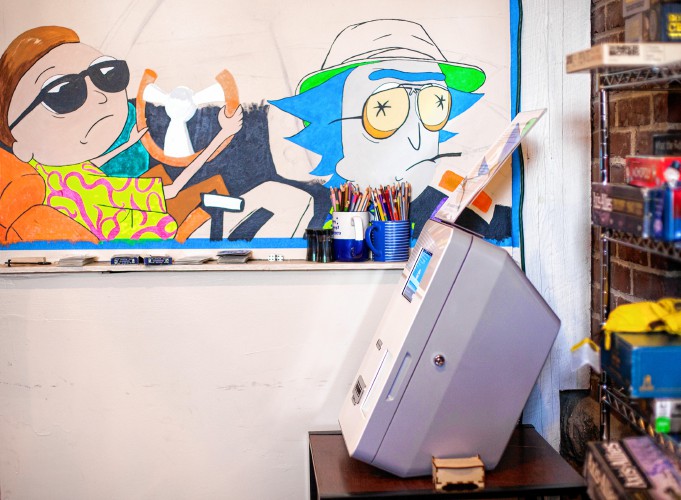 The newest apparatus at Concord bar Area 23 draws less attention than the pool table or dartboards, but co-owner Kirk McNeil says the bitcoin machine he has tucked into a corner serves the same purpose: Attracting customers.

“It’s a business move,” McNeil said of the decision to install the Lamassu brand bitcoin machine at the bar on 254 N. State St. “There are people in New Hampshire who like to do their personal business in bitcoin, and it behooves me to attract them.”

He added, “It’s definitely a conversation piece. People stop by to see what a bitcoin ATM is, and hopefully it will also attract some bitcoin aficionados.”

Bitcoin is a digital alternative to currency that operates free of any government oversight. The machine at Area 23 is better described as a vending machine than an ATM, as it lets people use cash to buy bitcoin in digital form, but does not dispense money or any physical object.

Area 23 is an obvious home for the device. Since the bar opened in 2015, it has allowed customers to use bitcoin to buy drinks. Such sales are a small but non-zero part of business, McNeil said.

“In a peak month, it might be in the neighborhood of $500. In general, it’s closer to $250. I get about as much business through bitcoin as I do through my jukebox,” he said.

As of Tuesday, a beer cost about six one-thousandth of one bitcoin, although exchange rates can fluctuate sharply.

And what about the political overtones of bitcoin, which is embraced by the Free State Project and many libertarians – a group that includes Area 23’s owners – as a way to avoid government oversight?

That’s a side issue, McNeil said.

The machine is owned by David Strahan of Keene, a freelance IT worker and member of the Free State Project, who said he installed it in Area 23 “both for activism and as a business.”

He takes roughly a 7 percent cut of sales, above the spot exchange price for bitcoin.

The machine at Area 23 can be monitored and serviced remotely – except for the need to empty it of cash when it fills up.

This is the fifth public bitcoin vending machine in New Hampshire, and the first between Manchester and the North Country.

“The machines in Keene and Manchester, I know those guys have to empty the machines a couple times a week, at least,” he said. “I don’t know what will happen here; we’ll see.”

While it’s hard to know for sure, there’s a good chance the Granite State is the Northeast’s leader in per-capita bitcoin machines, largely due to advocacy by Free Staters.

“While Boston recently added four machines, there’s nowhere else in all of Massachusetts, Maine, Vermont, Connecticut, Rhode Island and Northern New York to buy bitcoin in person,” said a report from Free Keene, an online publication associated with the Free State Project.

Strahan said bitcoin machine owners are organized under the brand Shire Bitcoin – The Shire being the name of a loose organization of Free State Project advocates. Aside from setting up machines, Shire Bitcoin works to entice local businesses to accept bitcoin for purchases. Strahan said close to 20 stores and eateries in New Hampshire accept bitcoin.

Bitcoin gained national attention three years ago as an alternative to the dollar or other currencies, but that role hasn’t caught on widely.

Its biggest impact appears to be as an alternative investment: Instead of buying gold in hopes that the price will rise during turbulent times, some people buy bitcoin.

Over the past year, those hopes have paid off, as the price of a single bitcoin has gone up from about $300 to nearly $1,000. A number of major players are rolling out bitcoin-based investment products.

The technology underlying bitcoin, known as blockchain, is also drawing attention as a potential way to improve many financial and legal systems, including contracts.

Area 23 drew some attention in 2015 because it is one of the hosts of a group called the Church of the Sword, which tried to get tax-exempt status as an organized religion. This attempt went all the way to the New Hampshire Supreme Court, which rejected the claim, saying that the group “simply (has) a set of beliefs about something and applies traditionally religious vocabulary to its practices.”