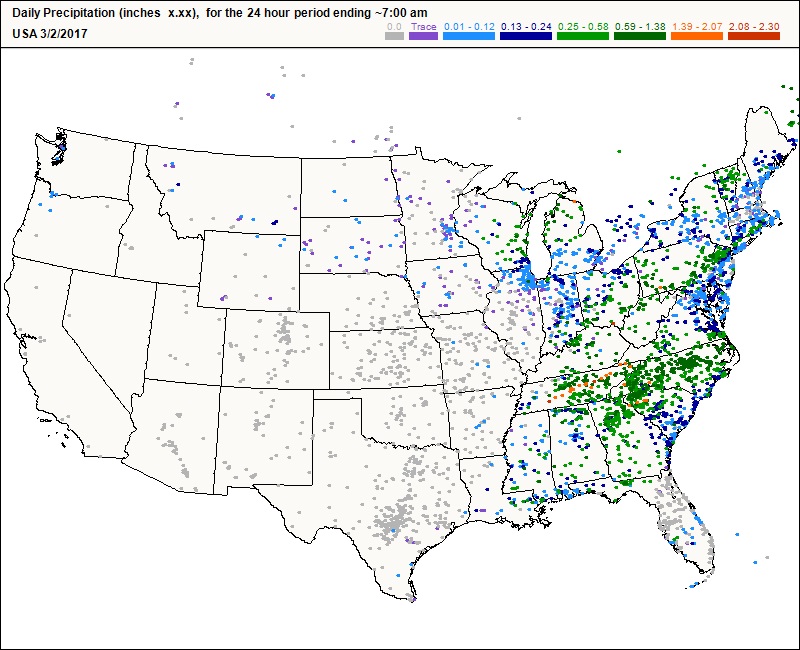 One of those blue dots in NH is me: This is as of 9 a.m., so many western places haven't reported yet.

There are plenty of places that do take-offs on the college basketball playoffs called March Madness (I like the March Mammal Madness bracket) so here’s one that you can participate in: CoCoRaHS March Madness.

The Community Collaborative Rain Hail Snow Network is a citizen-science program in which people gather and post daily precipitation data, gathered each morning at their home. I’ve been part of it for five or six years and it’s surprisingly interesting to get a sense of how much stuff if actually falling from the sky (in general, less than you’d think) and how much water actually exists in the snow on the ground (again, usually less than you’d think).

The program has grown to have roughly 11,000 submissions around the country and a few other places each day. They’d like to hit 20,000, which would be astonishing – and a part of their growth effort is a March Madness event that pits states against each other. The idea is to see which states can sign up the most new entries, and the most per capita.

New Hampshire has never won either of those categories, although we’ve been in the top 10 per capita once or twice. Maybe we can get there again – so if you’re interested, check it out. We especially need more observers in the North Country.