What do a Nashua dam and the Arctic ionosphere have in common?

From UNH news service: UNH’s Broadband Center of Excellence (BCoE) has awarded two grants to UNH researchers: one to a team that will bring the Internet of Things to water quality monitoring in the city of Nashua, and one to researchers who will create sensors to sample magnetic fields in the Arctic.

The first study, led by Gopal Mulukutla, research scientist at the Earth Systems Research Center within the Institute for the Study of Earth, Oceans, and Space (EOS), will devise, test and implement smart sensor-based wireless broadband networks to conduct water quality monitoring in Nashua, New Hampshire, and beyond.

After initial testing at two Durham sites — College Brook and Chesley Brook — the team will implement a fully functional network at the Mine Falls dam and canal system in Nashua. If successful, UNH intends to pursue commercial applications.

“We hope that this project leads to easy and low-cost methods for detecting water quality problems around the world,” says Jan Nisbet, senior vice provost for research at UNH. 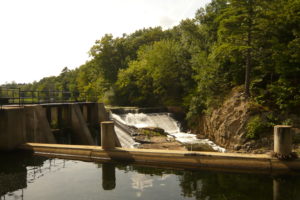 From Wikipedia: Mine Falls dam in Nashua

In Nashua, the project will focus on finding the cause of stagnant conditions observed in the pond and canal system near Mine Falls, a city-owned hydropower station. In addition, researchers will test the Nashua River, deemed impaired by the state for chloride pollution, above the Mine Falls. The test results will be shared widely and are anticipated to be part of an upcoming state regulatory process regarding license renewal for Mine Falls to continue operating.

The proposed Internet of Things (IoT)-based water quality work benefits from low-cost sensors and the advance of wireless broadband technology, replacing the hardware and manual maintenance and monitoring that have been used traditionally in this type of effort.

“Using hardware assembled from off-the-shelf components, we can isolate the timing and location of pollution sources,” the researchers say in their proposal.

In addition to Mulukutla, UNH researchers Michael Routhier, manager of the Geographic Information Systems Laboratory within EOS, and Wilfred Wollheim, associate professor of natural resources and the environment, will participate in the work. The team will work closely with Nashua waterways manager Madeleine Mineau, a former researcher within EOS.

The second grant, to UNH professor of physics Joachim Raeder and Nicholas Kirsch, associate professor of electrical and computer engineering and founding director of the Connectivity Research Center, aims to build a “smart” magnetometer that could measure the effects of space weather in remote Arctic regions.

“Based on the current structures in the ionosphere, an ideal observing network would have a space of 50 to 100 kilometers between sensors, but today’s networks are far from this level of density,” the researchers write. “Further, the most important regions, the auroral zones and polar caps, are most poorly covered because of how far they are from large populations.”

The team aims to build a low-cost smart magnetometer to sense space weather and transmit data over long distances; ultimately, they hope to deploy hundreds of sensors to create a massive sensor network in the Arctic.