Why are hiking trails in New Hampshire so darn steep and rocky? 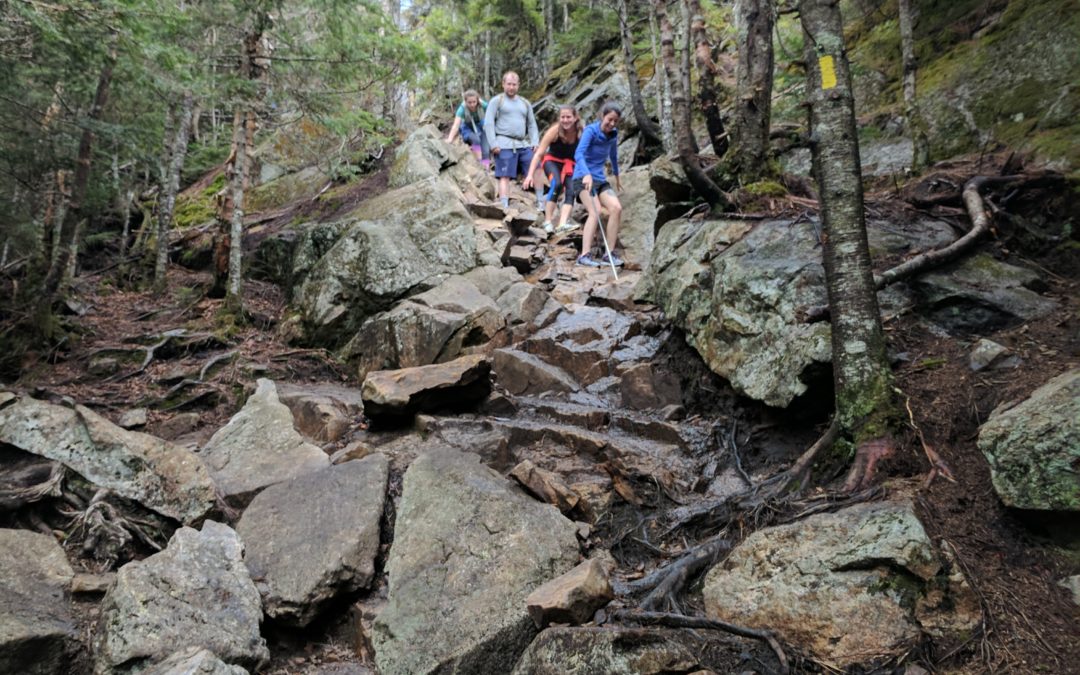 Toto, I don't think we're hiking in Alabama any more.

This story of mine ran in today’s Concord Monitor. I had a blast with it – my family has long wondered “why are trails in other parts of the country easier than in New Hampshire?”, so I got a chance to answer it.

The next time you find yourself cursing as you stumble and sweat up a steep, rocky trail in New Hampshire, like the out-of-state hiker whose angry letter in a Granite State newspaper has created something of an online frenzy, here’s one target for your wrath: Horses.

Or, rather, lack of horses.

“Out West, trails like the Pacific Crest Trail were graded for horses, so the incline never goes above 15 percent. That’s a major reason why they’re smoother and less steep,” said Roger Moor, whose 2009 hike of the Appalachian Trial led him to write a book, called On Trails: An Exploration, musing about outdoor paths.

The situation is different in New England, said Laurie Gullion, coordination of the outdoor education program at UNH.

“Most trails here were created through hiking, not horse-packing,” Gullion said when asked to explain why our trails have a reputation for being surprisingly difficult. “The conditions out West have always allowed using horses – the forest canopy is much more open than here.”

The rare exception exists in New Hampshire, such as the path that became the Mount Washington Auto Road or the Old Bridle Path (as in horse bridle) on Mount Lafayette, but generally the region’s hiking trails charge uphill with few pitch-reducing switchbacks and little concern about rocks and boulders.

This has long been recognized by Appalachian Trail through-hikers, whose pace slows considerably as they cross north into New England. But it came as an unpleasant surprise to an Alabama woman named Mary Altz-Smith, whose furious letter was published in the New Hampshire Union-Leader last week.

“The trails in the White Mountains are a disgrace,” wrote Altz-Smith, who said she and her husband are “veteran backpackers with 40 years of hiking experience.”

“You have to negotiate boulders and, basically, hike rocky stream beds to gain the most meager vistas and distance. These trails are dangerous and limit safe use to only athletes,” she wrote. “The Mount Jackson trail raises those hazards to unacceptable levels. The boulders should be reduced to proper steps and the last section should have handholds for safety.”

As might be expected, the letter drew online attention ranging from the irritated to the incredulous, starting with comments attached to the Union-Leader letter itself.

“This has to be a joke, right? Because if this woman is serious, she takes the concept of being a flatlander to a whole, ’nother level,” wrote Richard Olson Jr. Other commenters on Twitter and Facebook made joking references to a need for escalators and staircases.

Although Alabama isn’t exactly out West, hiking trails down South are also reputed to be easier than here.

“The generalization that New England trails are rockier and steeper than elsewhere in the country is true-ish. The Long Trail in Vermont and certain New Hampshire trails definitely have that reputation,” wrote Dennis Lewon, editor-in-chief of Backpacker magazine, in an email. “These are also some of the oldest trails in the country, I believe, and so perhaps they are rougher than elsewhere because of the standards when they were built.”

They are generally quite old, by the standards of recreational trails. Most famously, the Crawford Path on Mount Washington, first cut in 1819 for tourists, is often called the country’s oldest hiking trail in continuous use.

For his part, Moor said he thought part of the surprise for the Alabaman visitor came because trails in the South are in better shape than they are here, partly because of our harsher weather and perhaps the different geology, and also because the ratio of helpers to trails is higher.

“There are more volunteers down South,” Moor said. “The trails in Georgia and North Carolina are just fantastically well maintained. Once you go farther north, it thins out a bit. There are still a lot of trail-building clubs, but there are a lot of trails to maintain.”

“What I hear from trail builders when I talk to them up in Maine is they can’t keep up,” said Moor, who lives in British Columbia but regularly hiked Maine as a child.

Tradition might be part of it, said Stuart MacDonald, editor of American Trails magazine.

“It’s my impression that the Long Trail, the AT, and others follow these ‘sacred’ treadways that no one wants to re-locate, no matter how steep, rocky, and illogical by modern trail design ideas,” he wrote in an email. “The trend, and maybe it’s more prevalent in the west, is to do more renovation of trails with appropriate grades on steep side-slopes, functional drainage, and re-routing to reduce grades and eliminate ‘fall-line’ trails that go straight up the slope.”

And then there’s another possibility: We celebrate our trails’ ruggedness to compensate for the fact that our summits are relatively small. After all, even Mount Washington is shorter than a dozen peaks in the Black and Great Smoky mountains down South, and it is dwarfed by scores of mountains in the Sierra and Rocky mountains out West.

Like our mountaintop weather – worst in the world, we insist – our trails are more demanding than altitude numbers would make you think.

Or, at least, would make Alabaman letter-writers think.