Twitter has its problems, as is known by anybody who uses it or has seen it help destroy democratic institutions around the world, but it can be fun, too.

There’s an ongoing thread called @realscientists that working scientists use to discuss their daily life, their research and other aspects of being a scientist. (Lamentation about funding comes up a lot.) As part of it, people posted pictures of their pets, which led me to ask whether there was any correlation between pet species and scientific interest (“e.g., dogs for physics, cats for biology, armadillos for math”) . The curator passed it on:

We got a few Twitter responses, but not a ton – certainly nothing quantifiable. But we did get two good responses: 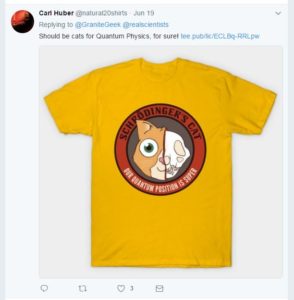