Somewhere in N.H. is halfway between equator and North Pole – just don’t ask exactly where 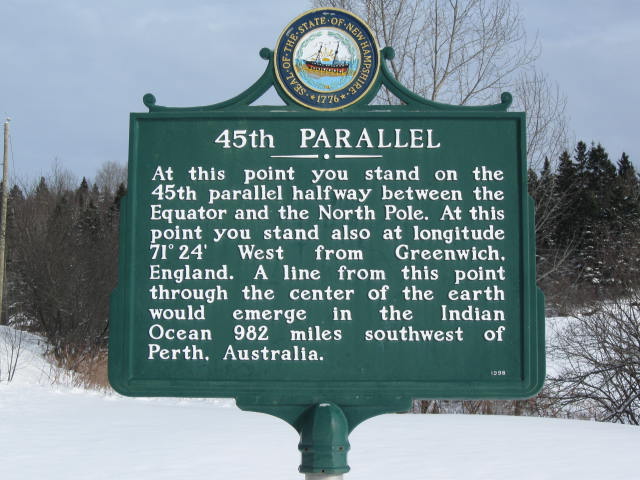 (This is my column from the June 26 Monitor – and boy, was it fun to report and write)

This is the story about one of New Hampshire’s roadside historical markers – actually, two of them that say the same thing – and how they’re not quite accurate for interesting reasons.

But before we go there, I’d like to salute what is officially called the Historical Highway Marker program for being brave enough to embrace not just the obvious topics but also the weird ones.

You have to admire a state that officially celebrates the first reported UFO alien abduction (“Betty and Barney Hill Incident” in Lincoln), a 19th-century farm draped in pseudo-historical New Age goofiness (“Mystery Hill” a.k.a. America’s Stonehenge in Salem) and something called the “Two-Mile Streak” in Barrington (which is not the world’s longest nudist dash, alas, but is still interesting).

Which brings us to the 45th parallel of latitude, an imaginary circle around the Earth that is celebrated on signs in two neighboring Coos County towns: Clarksville and Stewartstown. Both signs say that you are standing halfway between the equator and the North Pole, which fits right into the weird-topic category that is like catnip to a certain type of tourist.

“We usually get, on a weekend, four or five cars that stop, park right in front of our house, and walk up to the sign and take a picture,” said Charlie Jordan of Clarksville, who hosts that town’s sign on the property and who with his wife, Donna, publish the Colebrook Chronicle. “For a long time, couples each would take a turn, taking a picture standing next to the sign. Now people just take selfies.”

New Hampshire is far from alone in celebrating the geographic curiosity. Similar markers are sprinkled along the 45th parallel all around the world, including one in Perry, Maine, that was placed in 1896 as part of government surveys and is said to the first such marker ever created.

Not to be hemisphere-centric, there are also “halfway between equator and South Pole” markers along the southern 45th parallel, although that line passes mostly over ocean and you can only see them in New Zealand, Argentina and Chile.

But here’s the thing: Those lines are not actually halfway between the equator and the pole, because the Earth isn’t a sphere.

“There is no unambiguous way to actually define halfway between the equator and the pole,” said Jonathan Chipman, a professor of geography at Dartmouth who walked me through the details when I called, hat in hand, asking for help.

In principle, defining latitude is simple: Cut the distance between the equator and the pole into 90 equal parts and call each step one degree. If the planet was a big ball, that would be the end of it.

But the Earth, as you remember from high school, is slightly flattened because the rotation of the globe makes the middle bulge out a bit. Actually, Chipman said, it’s more complicated than that due to gravitational fluctuations – “sea level” isn’t even level! – but let’s stick with the flattened sphere.

The obvious method is to divide the angular measurement between pole and equator into 90 pieces as determined from the center of the planet. But because we’re not a sphere, the latitudes are not equally spaced on the surface – you have to walk slightly farther to get from one degree marker to the next when you’re in the Arctic than when in the tropics.

Here’s another way to think of it: Equal-angle measurement assumes that if you drill “straight down” from any location on Earth you’ll hit the center of the planet – but actually, unless you’re at one of the poles or on the equator, this drilling will miss the center. Try this on a chicken egg and you’ll see (make it hard boiled or it will be messy).

We could mark off latitude by walking equal distances between degree markers, but that’s not feasible and raises questions about mountains and valleys, not to mention the problem of navigation.

So we have always fudged it, creating models of the Earth’s surface to determine latitude. As we learn more and technology changes, those models have changed.

“In different places, you might choose different simplified models to represent this lumpy earth,” Chipman said. Before the era of satellites, we used the North American Datum of 1927 – “datum” meaning the starting point for a grid or scale – which is “based on a 3-D model whose surface fits North America pretty well, but is inaccurate elsewhere in the world.”

These days, the importance of Global Positioning System satellites is the limiting factor.

“With GPS all over world, you want to use an Earth-centered or geocentric datum – a model that is centered on the center of the Earth and fits a reasonable approximation of the surface, but is not necessarily optimal anywhere,” he said.

So where is the precise location of the 45th parallel in New Hampshire? Nowhere, really.

“All these models of the Earth, these datums, are compromises,” Chipman said. “You would have many different 45th parallels, depending on which model you are using.”

How much of a compromise? “A little – we’re talking about tens of meters. This matters a great deal to surveyors, but doesn’t matter much to the rest of us.”

You can see this yourself, depending on the complexity of your GPS app or device. If you can go into the settings and change the datum, it will slightly change the latitude figure for your position.

There are places online, including Wikipedia, where you’ll be told that 45th parallel markers are wrong by precisely 10.1 miles, but that merely replaces one false exactitude with a different false exactitude.

The photo that accompanies Wikipedia’s article about the southern hemisphere’s 45th parallel reflects the situation. The sign in New Zealand says the equator is 4,990 kilometers away and the South Pole is 5,011 kilometers away – a difference of 6.5 miles, not 10.1 miles, and I suspect it’s not that precise, either.

So relax. If you visit either of New Hampshire’s 45th parallel markers, don’t get too freaked out by geographic uncertainty. Just enjoy the bit of officially sanctioned quirkiness.

There’s a second reason not to be overly exact in Clarksville, Jordan told me: The sign has been moved.

The original sign, he said, was on Route 145 in the 1950s just north of the spot that surveyors indicated, because the road was too dangerous at that spot. In the 1980s, the 45th parallel sign on Route 3 in Stewartstown was stolen and “from what we understand the (Department of Transportation) took Clarksville’s and placed it on the empty pole in Stewartstown. We Clarksville residents were none too happy about that.”

In 1997, the Jordans spotted an “old, wooden 45th Parallel sign in a barn at the Lancaster Historical Society,” and the society gave it to them. The family put it on their land roughly 200 feet or so from the previous sign – a decision made to further improve the of tourists pulling over to take photos.

“The DOT contacted us in 1998 and said that if we took the old wooden sign down they would replace it with a new official historical marker sign like the one Clarksville used to have. … And there it has been since. I mow around it today,” he said.

Jordan said he gets some queries about whether the sign is in the right place, and he’s developed a good response: “I tell them it’s a thick line!”

He’s more right than he realized.