Official goofiness in NH: Alien abduction and our own “stonehenge”

Last week I wrote about the 45th parallel cutting through New Hampshire (you can re-read my sterling prose right here) and mentioned some other wonderful historical markers that the state has placed. I figured that those of you lacking New Hampshire knowledge might like to know more, so here are two of interest to Granite Geekers: 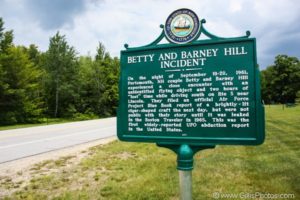 The best one – maybe the best historical marker in the entire U.S. – commemorates the Portsmouth couple who say they were abducted by aliens in 1961, the first such claim to get widespread publicity. Betty and Barney Hill were an interesting couple (both have passed away) partly because they were interracial at a time when that was uncommon, but their UFO-abduction claim is typical baloney.  Yet at the time it was novel baloney, which is why it got a lot of attention from sources including a best-selling book and a movie staring James Earl Jones as Barney. The University of New Hampshire, where Betty Hill graduated, even has her papers about the abduction and subsequent coverage in its special collections.

Wikipedia has a long article about the abduction right here. One of the people who has edited the article over the years is a niece of Betty Hill, which is why it’s too long and not always as objective as it should be. 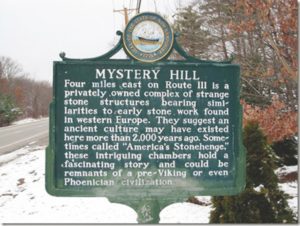 The second-best state marker involves Mystery Hill, a site now peddled to the public as America’s Stonehenge,  “most likely the oldest man-made construction in the United States (over 4000 years old)”. That is, frankly, nonsense, but it’s entertaining nonsense both for the site itself, which is beautifully woodsy and full of neat stone structures, and for the goofy New Agers who flock to it. I wrote about it in the Nashua Telegraph as recently as 2014. I first wrote about it in 1987, shortly after moving to New Hampshire, because it was a big site for the Harmonic Convergence, a global New Age foolishness-fest.

If you’re interested in all the state’s 255 (and counting) markers, check the state site here.