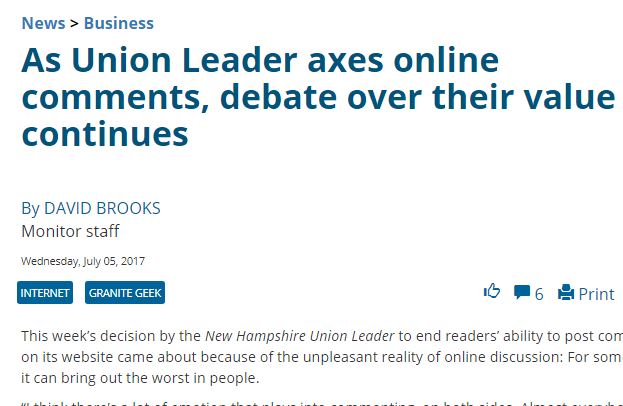 As of 9:30 a.m. the day of publication, the article had six comments (although one was mine)

(This story appeared in the July 6 Monitor. As of this writing, all the comments posted at the end of it are thoughtful, well-written and in complete paragraph form. Go figure.)

This week’s decision by the New Hampshire Union Leader to end readers’ ability to post comments on its website came about because of the unpleasant reality of online discussion: For some reason, it can bring out the worst in people.

“I think there’s a lot of emotion that plays into commenting, on both sides. Almost everybody that posts on your website goes overboard sometimes,” said Bill Bunker of Barnstead, one of the few people who has been banned from commenting on the Monitor’s website, after he repeatedly broke the “Rules of the Road,” a list of guiding principles that are meant to foster debate and maintain civility.

Bunker said that he wants to comment at ConcordMonitor.com because he feels his conservative political views are not well-represented by the newspaper.

“Most of the press is slanted, and I think (commenting) gives a person an opportunity to present an opposite view.”

Dan Williams of Concord, a longtime commenter on the Monitor website, has different political beliefs than Bunker, but similar conflicted feelings about the value and drawback of online comments.

“I think public discourse is important in a free and democratic society. However, I understand … that much of the discourse is not constructive,” Williams said.

And although Williams has suffered from this reality – he said he’s gone so far as to change his Facebook name to avoid a combative commenter whom he doesn’t even know – he admits he can be part of the problem.

“I will confess that I’ve been a jerk on the internet, too; it’s hard not to,” he said.

On Tuesday, the state’s biggest newspaper got tired of people being jerks on its website and stopped allowing comments to be placed at the end of articles on UnionLeader.com, which has allowed such comments since the technology first became viable.

“We’ve been looking at comments for a long time, like a lot of news entities have,” said Brendan McQuaid, president of Union Leader Corp.

The move wasn’t triggered by any specific story or event, McQuaid said, but was the culmination of growing concern about the way article comments can turn unproductive and nasty, dominated by a few people.

“There are a number of people who got very used to commenting on our site. Often it was a small group of people that would shout down other viewpoints, and it became pretty vitriolic,” McQuaid said.

Removing inappropriate remarks became more trouble than it was worth, he said: “We have other things to focus on, rather than supporting a commenting system for a relatively small group of people.”

The company has no plans to turn website comments back on, although it will keep its options open, McQuaid said.

The Concord Monitor allows comments on all articles and has no plans to change the policy, said Monitor editor Steve Leone – although he acknowledged the drawbacks.

“Comments get dominated by the loud and the few,” Leone said. “They seem to turn on the same part of your brain that reacts in road rage.”

Monitor readers must register through Facebook, a move designed to hold them accountable by making anonymous comments more difficult. At UnionLeader.com, commenters registered through the site itself.

Dan Kennedy, a journalism professor at Northeastern University and a well-known media critic, said the Union Leader’s decision fits into a growing realization that reader comments have not lived up to their promise.

“I remember going back 20 years there was a great deal of optimism that this was a way of making the cliche ‘news as a conversation’ really come to life,” Kennedy said. “Doing our work as an iterative process – you get something up, your community gives you insight, you revise – it all sounded pretty wonderful.”

That was then, this is now.

“My own perspective is that comments can be a very valuable part of what you do, but if you’re not going to screen every one before it goes up, you’re not being serious about it. If you don’t have the resources to do that, then yeah, you might not want to keep them,” Kennedy said.

The issues have led many news organizations, as diverse as the Reuters news service, Wired.com and National Public Radio (but not New Hampshire Public Radio), to turn off comments on their articles.

At UnionLeader.com, as at ConcordMonitor.com, several editors had the responsibility to keep an eye on comments and remove them if necessary. But that’s an expensive process for an industry that has been struggling with changes in its business model.

“Human moderation and curation – I don’t think that even the largest papers can afford to do that,” said Ernesto Burden, vice president for digital operations for Newspapers of New England, which publishes seven daily and weekly newspapers including the Monitor.

“I think comments still are a really valid form of community engagement around a topic,” he added. “The problem is that we’re not equipped to handle the volume of comments that are possible on any given topic, so the least valuable comments can sometimes outweigh in noise the valuable comments.”

But he held out hope for technology.

“From what we’re seeing, one of the solutions to this is going to be A.I. (artificial intelligence) and machine learning to do comment moderation,” Burden said.

“We think the articles will reach a wider swath of people, and the conversation will become wider than a small group of people being political,” he said.

As for Bunker, being blocked at ConcordMonitor.com has led him to concentrate on another outlet for his views: old-fashioned letters to the editor.

“I get a lot more out of writing a letter – it’s a little bit more thoughtful,” he said. “If I write a letter and anybody comments on it, I’m interested in what they think and what they say.”