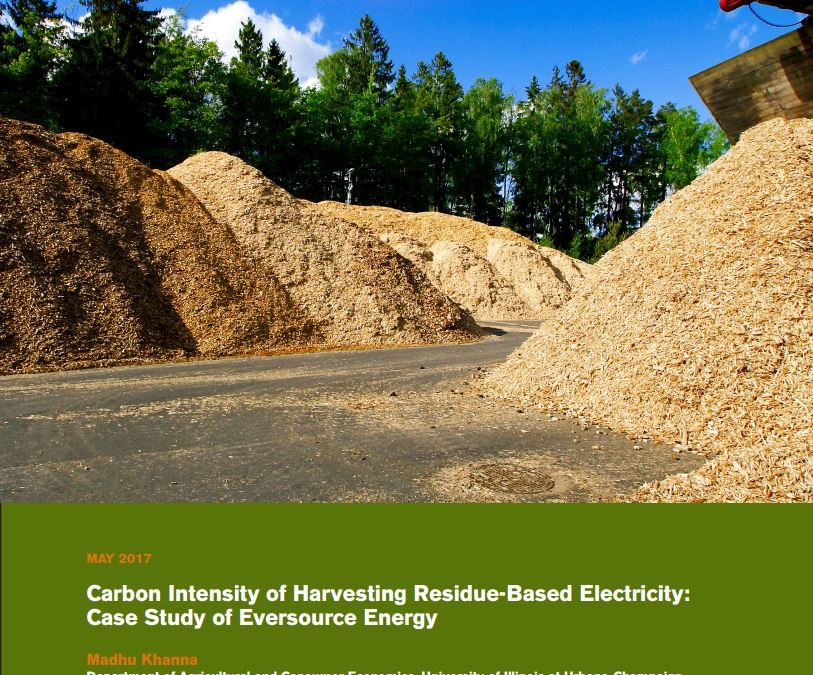 It has always seemed obvious to me that it would be good for battling climate change, as well as good for local jobs and taxes, if tree-filled Northern New England created more electricity and heat by burning wood rather than burning coal, oil or gas. After all, burning wood releases carbon that would be released within a century or two anyway, after the tree dies, and which can be re-absorbed by trees growing to replace the fuel source, but burning fossil fuel releases carbon that otherwise would stay trapped forever and for which there is no system for re-absorption.

However, I’ve found that the environmental part of my belief is actually not at all obvious and has been the subject of much academic debate.

A famous (notorious, if you’re a forester) study in 2014 argued that wood-burning was often worse for the environment than even burning coal, saying: “Even the cleanest biomass plants can emit more than 150% the nitrogen oxides, more than 600% the volatile organic compounds, more than 190% the particulate matter, and more than 125% the carbon monoxide of a coal plant per megawatt-hour, although coal produces more sulfur dioxide (SO2 ). Emissions from a biomass plant exceed those from a natural gas plant by more than 800% for every major pollutant.”

This counter-intuitive finding comes about partly because wood is much less energy dense than coal or oil or gas, so you need to burn more of it to produce the same amount of electricity and heat.

There have been many studies on the topic since, arguing both for and against this position. The most recent landed on my inbox today.

Researchers at the University of Georgia and University of Illinois did a cradle-to-grave analysis of the carbon intensity of burning wood at the Northern Wood Power Project in Portsmouth. Eleven years ago Eversource (it was PSNH at the time) converted one of Schiller Station’s three 50-megawatt coal/oil-fired plants to burn wood, and it has been chugging along happily ever since. The other two boilers at Schiller still burn fossil suel.

The conclusion of this recent study (the whole thing is here) is that wood wins by a knockout, even over natural gas: “Our assessment of the carbon intensity … (finds) the use of harvesting residues to displace natural gas based electricity can result in savings ranging from 115% in initial years of commencing harvesting of those residues to about 98% by year 100.”

So there you have it; my belief is corret. Right?

Well, first note that this study was funded by the Biomass Power Association, the lobbying group for the industry that burns wood for energy. I don’t think that invalidates it, although I suspect that if the researchers had reached the opposite conclusion, we wouldn’t have heard about it.

But the key point in this debate is that the underlying assumptions make all the difference. This isn’t a black-or-white situation.

Opponents point to the Southeast, where  forests have been cut to create plantations of fast-growing trees that are cut down to create wood pellets for Europe, which has generous (maybe overly generous) support for biomass power. That scenario releases a surprising amount of carbon and has given the industry an ecological black eye.

But that isn’t the way biomass works in the Northeast. Here, power plants burn the parts of trees that are left over when forests are cut for other reasons – “low-grade wood” that can’t be turned into profitable lumber or firewood. (I wrote about the effect on loggers of the low-grade wood market in this article last month.) They also burn waste from processing wood – sawdust, etc., from mills.

That process is key to why biomass beats fossil fuel, carbon-wise, the recent researchers report: “Underlying assumptions of our analysis are that the collection of harvesting residues does not affect forest harvesting and management operations, the rotation age of forests, forest growth, and carbon storage in standing harvesting residues or soil carbon stocks; this implicitly assumes that harvesting of tops and limbs and non-merchantable biomass would have occurred anyway. … We are also assuming that the demand for harvesting residues for electricity generation does not affect the production of conventional forest products or lead to any changes in an area under forestry cover over time.”

In other words, the Northeast does it right, and you should support biomass power here. But within limits.

Note that this method puts a cap on the amount of biomass power we can produce. If every coal-fired plant converted to biomass tomorrow there wouldn’t be enough low-grade wood to feed them regularly, forcing them to use less beneficial sources of wood. So even though our heavily forested states seem like the “Saudi Arabia of biomass”, there would be some serious environmental consequences if we tried to take on that role.

Having said all that, whenever possible I will keep my oil-fired furnace turned off and heat our house with my wood pellet stove. And when my local school needs to upgrade its old boiler I will recommend installing a wood-fired boiler. Because buying local is a good thing, even if it’s not the environmental home run I hoped.