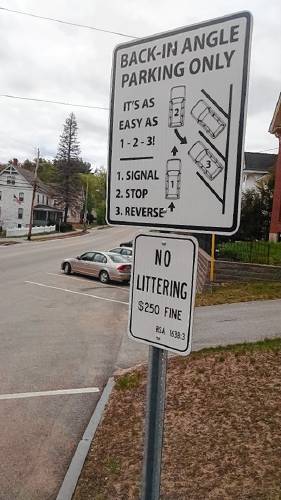 There are certain topics that get everybody riled up – politics, religion, which way to hang the toilet-paper roll. And parking. Especially parking.

Everybody hates parking but everybody wants more parking, and they want it a specific size and shape. It’s risky to mess with anyone’s parking.

So I must doff my cap in respect to Pembroke, which flew in the face of convention and created something that I believe is unique within New Hampshire: Back-in angled public street parking.

If you want to use any of the 21 spaces along an uphill stretch of Broadway, you have to stop in traffic and back up, at an angle to the sidewalk. This is so unusual that the parking signs there look like users’ manuals, complete with illustrations about where and when to do this and that.

When I saw the spots, I was sure they would be the topic of much debate, but apparently I misjudged the calm and rational nature of life along the Suncook River.

“We thought at first there was going to be a lot of complaints and criticism. But people have really warmed to it,” said Pembroke Town Administrator David Jodoin.

The only thing that gets people irritated, he said, is that you can’t park there between 9 a.m. and 2 p.m. on Wednesdays, to leave room for the trash/recycling trucks. Town Hall definitely hears complaints about that.

I even left notes on some cars parked in the spaces, asking people to call me if they had concerns. Not a peep.

Harry Atwood, who lives across from the parking places at 28 Broadway, isn’t surprised. He said he has lived there six years and hasn’t seen or heard any complaints or confusion about the spaces, which are mostly used by people living in nearby apartments.

He also appreciates the design: “If it had parallel parking, there’d be only half as many spots, ” he said.

That, indeed, is one of the main reasons Pembroke angled the parking when it redesigned Broadway Street around 2010. The redesign also combined all the parking on the north side, where people are driving up the fairly long hill and thus going more slowly.

Angles, sure – but why back-in angles? Thank Mike Vignale of KV Partners in New Boston, the engineer on the project.

“Since we were planning to use angle parking anyway, I suggested back-in angle parking because it is much safer than head-in angle parking in many situations,” he wrote in an email response to my queries. “This configuration is fairly common in Massachusetts, and I have used it there on some of my projects with no problem. The biggest problem is public acceptance … many people just don’t want change.”

Indeed not. When I praised back-in parking in this column several years ago, I heard from a number of readers who thought it was the stupidest thing I’d ever written, which is saying something.

The argument for back-in parking is that when you, the driver, are pulling into traffic, you can better see oncoming vehicles. I know of companies that encourage or mandate back-in parking when employees use company vehicles to cut down on accidents.

Vignale has a brochure that lists 25 communities across the country (including Pembroke) using back-in parking that points out other advantages.

One is that car doors open with the passenger stepping toward the sidewalk rather than the street, making it less likely that kids leaving the car will step into traffic. Another is that the trunk is next to the sidewalk, making it easier to load groceries without worrying about vehicles zipping right behind you.

The brochure doesn’t mention the big drawback, however: Backing into a parking space can be tricky. If there are cars next to the space, you might scrape them; if there are no cars next to it, you have trouble telling where the lines are. Such discomfort is usually the death knell of back-in parking, angled or otherwise.

“I also used this configuration in the downtown of a small community in New Hampshire,” wrote Vignale, “but after the back-in parking was installed, a few area businesses didn’t like it so the selectmen decided to change it back to head-in angle parking after some persistent complaining (and a change in board members).”

I have rarely seen places where back-in parking, angled or otherwise, is required, but I have seen many places where it’s illegal. These tend to be on narrow or busy streets, out of the belief that it’s dangerous for people to stop in the middle of the road and then back up.

But if you think about it, why is that any more dangerous than making people back into traffic, half-blind, when leaving a parking space? It’s probably not any less dangerous – it’s just the arrangement we’re used to.

So you know what? Pembroke is right: It’s time to change our outmoded thinking. Whether angled or straight in, it’s time to flip the orientation of our vehicles as we bring them to a halt.

Back-in parkers of the world, unite: You have nothing to lose but your fender benders!