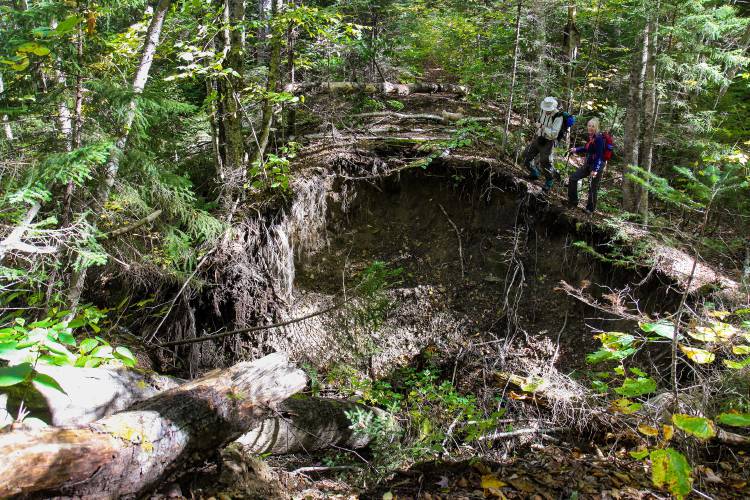 Four years after Hurricane Irene, a portion of the Wilderness Trail was still washed out - yet Hurricane Harvey dumped at least 4 times as much rain as Irene. 2015 photo (DAVID BROOKS / Monitor staff)

Over a period of three to four days, Hurricane Harvey has dumped more than 45 inches of rain over large swaths of Texas. That’s a staggering number, and it led one reader to call the newsroom with a question: What would happen if that much rain fell on Concord?

“Everything would be destroyed. Everything,” said Tom Hawley, a hydrologist with the National Weather Service in Gray, Maine, which covers most of New Hampshire, including Concord.

The damage here, he said, would be much greater than the damage in Houston because of our geology.

“They are flat as a pancake. The land fills up like a bathtub, it’s not a gush of water. Can you imagine 50 inches of rain coming off the White Mountains, coming down the Pemigewasset and Saco River basins, down into the Merrimack (River)? It would be a wall of water,” he said.

For a comparison, consider Hurricane Irene, which tore up parts of northern New Hampshire and Vermont, to the point that some places in the Green Mountain State took three years to recover. Yet Irene brought less than 10 inches of rain over two days to most areas in New England.

Here’s another way to think about what might happen if something like Harvey ever showed up here:

During the disastrous Mother’s Day Flood of 2006, more than 600 New Hampshire roads were closed by high water, damage to buildings totaled millions of dollars, and more than 500 National Guard troops were deployed to help with rescues.

And Concord received a total of 8.22 inches of rain in those three days, which was the highest three-day precipitation total ever recorded in Concord, according to a National Weather Service database search, yet it’s less than one-fifth of the amount of rain Harvey dumped on Houston.

Our saving grace it is that it is so unlikely for a Harvey-like storm to pass over New England that it can be considered impossible.

The reason hurricanes form and do the most damage in tropical and near-tropical latitudes is that they are fueled by the energy of warm ocean water. It appears that Harvey was made worse by rising temperatures in the Gulf of Mexico due to climate change.

Even though temperatures in the Atlantic Ocean are also rising, they will remain well below levels that energize hurricanes.

That doesn’t mean we won’t he hit by future Irenes, as well as damaging ice storms and nor’easters, but at least we don’t have to worry too much about being washed away by the likes of Harvey.

“We just can’t get that kind of rain up here; it’s just theoretically impossible,” Hawley said. “And that’s fortunate.”