New type of pituitary cell found in lampreys at UNH 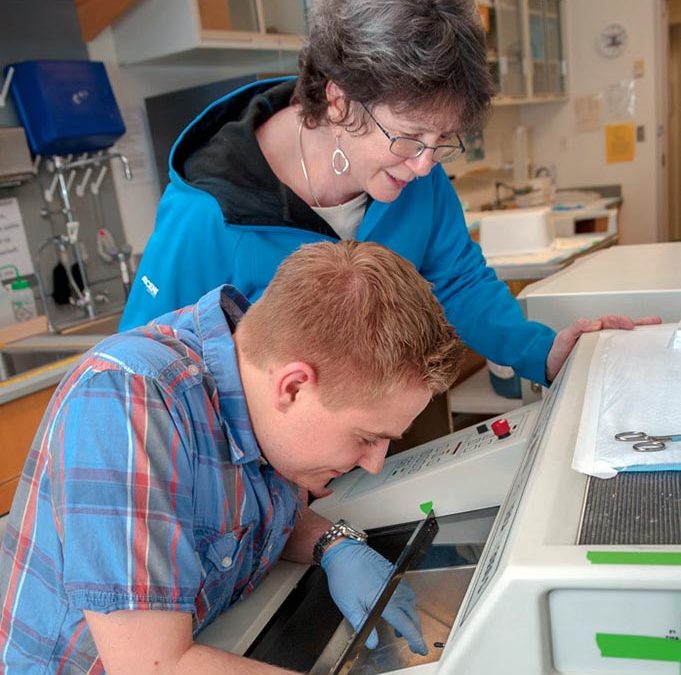 Tim Marquis worked for five years in Dr. Stacia Sower’s lab, the Anadromous Fish and Aquatic Invertebrate Research Laboratory, starting as a first-year student. Here they work together at the cryostat machine in 2017,

By UNH News Service: Discovering a new type of cell is a remarkable accomplishment for any scientists. Tim Marquis, who graduated in 2015 with his bachelor’s degree in biomedical science from the University of New Hampshire, can check that off his bucket list.

Marquis, now is in his second year of medical school at the University of Connecticut, discovered a novel pituitary cell type in the lamprey as an undergraduate at UNH while working in the lab of Dr. Stacia Sower, a researcher with the NH Agricultural Experiment Station and professor emeritus of biochemistry and molecular biology.

“The outcome of this research is extremely significant and of major consequence. Tim and our collaborators have identified a novel pituitary cell type in the lamprey. The findings confirm the existence of two pituitary hormones and now allows us to complete other projects,” Sower said.

The discovery of the new cell type is presented in the journal Cell and Tissue Research in the article Comprehensive Histological and Immunological Studies Reveal a Novel Glycoprotein Hormone and Thyrostimulin Expressing Proto-Glycotrope in the Sea Lamprey Pituitary. The research also recently was featured as an Editors’ Pick in Biomedical Advances.

“We used a variety of cutting edge, highly technical and specialized research techniques to reveal the different cell types of the lamprey pituitary. In the process, we discovered a novel pituitary cell type that we have named the proto-glycotrope, which is expressing two unique lamprey pituitary hormones, called lamprey glycoprotein hormone and thyrostimulin,” Marquis said.

“Our study provides important new insights into the neuroendocrinology in lampreys relative to other vertebrates, based on the pituitary cell types that are present, including the novel proto-glycotropes,” he said.

The research project Marquis conducted is an extension of nearly four decades of lamprey research by Sower and and those who have been associated with the Anadromous Fish and Aquatic Invertebrate Research Laboratory. The lab has made significant advances in knowledge about the structure and function of the hypothalamic (part of the brain) and pituitary hormones along with respective receptors.

Studying the lamprey has allowed scientists to better understand human physiology and disease, and develop breakthrough medical treatments for diseases, such as cancer. In 2003, the Sower laboratory discovered a novel brain hypothalamic hormone called lamprey gonadotropin-releasing hormone (GnRH)–III (lGnRH-III). GnRH is best known as the major regulator of the hypothalamic-pituitary-gonadal axis controlling reproduction across all vertebrates. There are variant forms of GnRH in different species of vertebrates. Mammals have one GnRH while lampreys have three GnRHs. GnRH-III of the lamprey was shown to be able to prevent the spread of prostate cancers cells. More recent studies have shown it can prevent the spread of melanoma.

In addition, lampreys are considered a species of concern in New Hampshire. They play a vital role in the ecology of coastal rivers, estuaries and the ocean. This research can contribute to an understanding of the lampreys to assist state and federal agencies with managing the lamprey population.

“This research represents an absolutely stunning job by a former UNH undergraduate Timothy Marquis. The research done by Tim in this paper was incredibly extensive using the techniques of in situ hybridization, histology, immunohistochemistry and transmission electron microscopy. His first steps included learning these challenging techniques in depth and the neuroanatomy of the lamprey — not a minor task by any means. Through his research, he identified a new cell type, called proto-glycotrope in the pituitary of the lamprey. This work is of such high caliber and equivalent to at least a doctoral thesis,” Sower said.

Marquis worked for five years in Sower’s lab, starting as a freshman and extending his time with one extra year as a technician in her lab. “He was the recipient of many awards and certainly one of the top 1 percent of undergraduates that I had in my laboratory and in the college over 35 years,” she said.

This material is based upon work supported by the NH Agricultural Experiment Station, through joint funding of the National Institute of Food and Agriculture, U.S. Department of Agriculture, under award number 0224826 and 1003341, and the state of New Hampshire. Major funding was provided by the National Science Foundation under award NSF IOS-1257476.