Warming world will release more carbon from the soil, no matter what we do 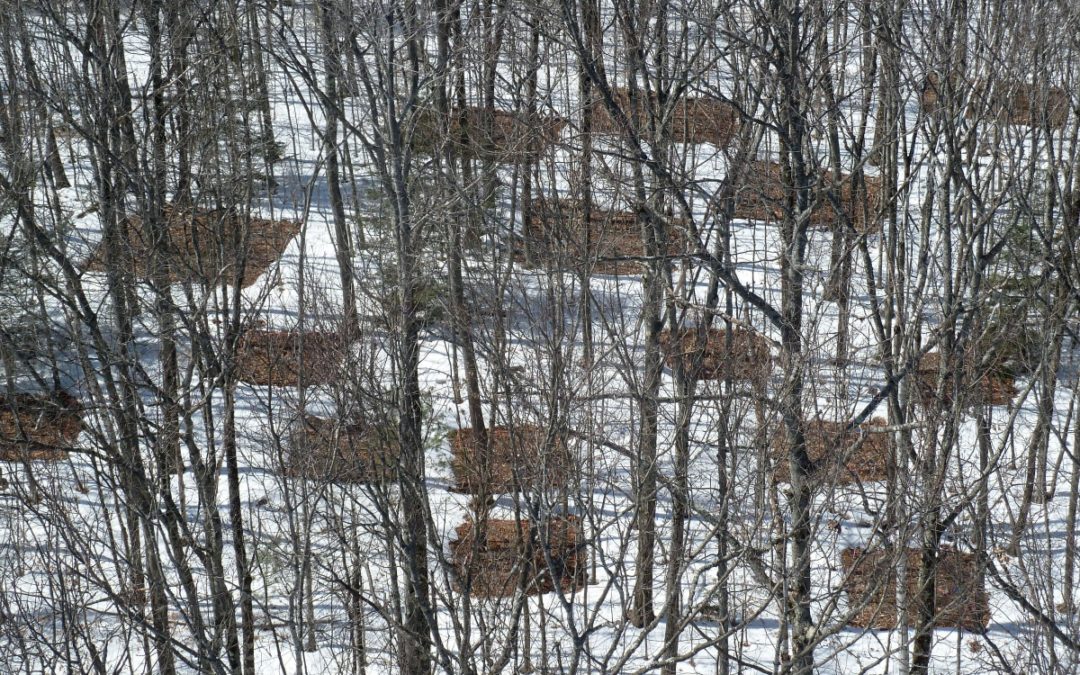 Heated and control plots in a long-term soil warming study at Harvard Forest, Petersham, Mass. which began the study in 1991. Photo: Audrey Barker-Plotkin

By UNH News Service: After 26 years, the world’s longest-running experiment to discover how warming temperatures affect forest soils has revealed a surprising, cyclical response: Soil warming stimulates periods of abundant carbon release from the soil to the atmosphere alternating with periods of no detectable loss in soil carbon stores. Overall, the results indicate that in a warming world, a self-reinforcing and perhaps uncontrollable carbon feedback will occur between the carbon flux of forest soils, caused by the natural respiration of soil microbes and plant roots, and the climate system, adding to the build-up of atmospheric carbon dioxide caused by burning fossil fuels and accelerating global warming. The study appears in the October 6 issue of Science.

“The research results were remarkable,” said Serita Frey, professor of natural resources and the environment at the University of New Hampshire, and co-author of the study. “No one has observed this before because no other experiments have run this long. Previous, shorter studies have shown that after a soil has been warmed for a few years soil organism activity declines, leading to lower carbon dioxide emissions. The surprising result here is that if you keep warming the soil for longer, a decade or more, it appears that the microbes change and their activities once again become stimulated so more carbon dioxide is lost from the soil and goes into the atmosphere where it can accelerate climate warming.”

The researchers began this pioneering experiment in 1991 in a deciduous forest stand at the Harvard Forest in Massachusetts. They buried electrical cables in a set of plots and heated the soil 5°C above the ambient temperature of control plots. Over the course of the 26-year experiment (which still continues), the warmed plots lost 17 percent of the carbon that had been stored in organic matter in the top 60 centimeters of soil.

“To put this in context,” said Jerry Melillo, distinguished scientist at the Marine Biological Laboratory Ecosystems Center in Woods Hole, Mass., and the lead scientist on the study, “each year, mostly from fossil fuel burning, we are releasing about 10 billion metric tons of carbon into the atmosphere. That’s what’s causing the increase in atmospheric carbon dioxide concentration and global warming. The world’s soils contain about 3,500 billion metric tons of carbon. If a significant amount of that soil carbon is added to the atmosphere, due to microbial activity in warmer soils, that will accelerate the global warming process. And once this self-reinforcing feedback begins, there is no easy way to turn it off. There is no switch to flip.”

“The only way to stop this train,” adds Frey, “is to reduce fossil fuel emissions so that Earth’s temperature doesn’t continue to climb, warming ecosystems and altering how they function.”

Over the course of the experiment, the researchers observed fluctuations in the rate of soil carbon emission from the heated plots, indicating cycles in the capacity of soil microbes to degrade organic matter and release carbon. Phase I (1991 to 2000) was a period of substantial soil carbon loss that was rapid at first, then slowed to near zero. In Phase II (2001-2007), there was no difference in carbon emissions between the warmed and the control plots. In Phase III (2008-2013), carbon release from heated plots again exceeded that from control plots. This coincided with a continued shift in the soil microbial community. Microbes that can degrade more recalcitrant soil organic matter, such as lignin, became more dominant, as shown by genomic and extracellular enzyme analyses. In Phase IV (2014 to current), carbon emissions from the heated plots have again dropped, suggesting that another reorganization of the soil microbial community could be underway. If the cyclical pattern continues, Phase IV will eventually transition to another phase of higher carbon loss from the heated plots.

“This work is not only important in emphasizing the importance of soil microorganisms in helping to control the composition of the atmosphere,” says Frey, “but also in understanding and predicting future climate. This research points to a warmer future which, as we have already seen evidence, can cause a host of effects such as more severe and less predictable weather, longer growing seasons, warmer winters, more frequent and severe flooding in some regions, but much less precipitation and more drought in other areas. All of these having downstream effects on plants, animals and humans”.