There’s no way Amazon is coming to N.H., but inviting them was still worth our time 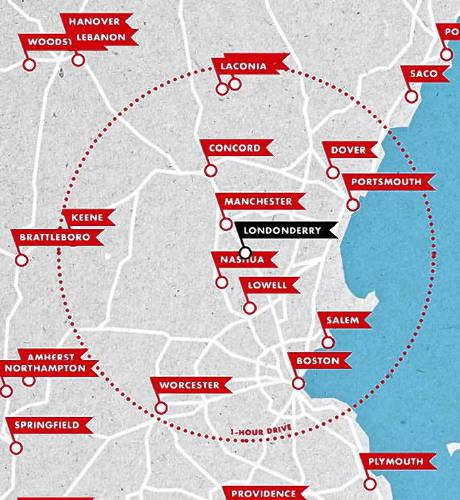 This "one-hour circle" is extremely accurate, as long as you're driving at 3 a.m. on a Sunday.

Like a bunch of places, I wrote about New Hampshire pitch to host Amazon’s second headquarters. Since there’s zero chance it will come here, I was prepared to be pretty snide about the effort, but the state’s pitch is pretty good. It didn’t offer any tax breaks but basically says “NH is a nice place to be and pretty good for business,” and it  took advantage of a massive private development that happens to be ready. Plus it included a few shots at Boston, which is always fun. The entire presentation can be read online – or you can check out my story from Thursday.

New Hampshire’s chances to land retail giant Amazon’s second national headquarters in the face of frenzied competition might be slim at best, but state development officials said that merely preparing a bid will help lure other firms.

“This allows us to be on the national stage,” said Taylor Caswell, commissioner of the Department of Business and Economic Affairs, at a Wednesday unveiling of the state’s pitch to Amazon.

“We now have a regional network in southern New Hampshire that has been extremely cooperative, from Concord and Manchester to Nashua, to look at different sites, talk about what we need to do to continue this advancing economy,” he said. “As we continue to recruit companies into New Hampshire … the pieces are in place. We are now going be able to structure a lot of the joint marketing we’ll be doing for businesses over the next three, four, five years.”

Gov. Chris Sununu and Caswell rolled out their formal bid in a presentation at the State House on Wednesday morning, one day before proposals were due.

Amazon said it wants to build a second national headquarters to supplement its Seattle site, and speculates that it could produce as many as 50,000 jobs. Scores of cities and states around the country – including as many as 10 locations in Massachusetts alone – have indicated interest and are expected to submit proposals by Thursday.

Unlike many pitches, New Hampshire is offering no financial incentives such as tax breaks or subsidies.

“We don’t play in the game of giving massive tax breaks,” Sununu said. “Other states have to do that because they have massive taxes. … Everyone else is still trying to play catch-up to New Hampshire. This provides a gateway opportunity to promote that.”

Caswell agreed: “We are not going to be giving Amazon anything more than we’ve given any other employer that has come to New Hampshire over the last 20, 30, 50 years.”

Basically, the New Hampshire pitch unveiled Wednesday tells Amazon that it should come here because we’re a good place to live and work, our taxes are low, and because there is a huge “shovel-ready” site waiting for them that isn’t too far from Boston.

That location is the 629-acre Woodmont Commons in Londonderry, straddling Interstate 93 just north of Exit 4, on the border with Derry. Site of the former Woodmont Orchards, it has been eyed for many years by Londonderry as a way to bring more commercial tax base and housing into the town.

A map released Wednesday showed room for as much as 7.5 million square feet of office and industrial space to the east of the highway, and roughly 1,000 units of single- and multihome development, including a “walkable” mixed-use area, on the west side of the highway.

The land is already zoned for such a project, and a new highway exit feeding the development has been approved. It would be called Exit 4A, which officials joked stands for “Exit 4 Amazon.”

“It’s literally a shovel-ready site, and there are not many of those sites to be had … within the time frame,” Caswell said.

“This project was zoned for this kind of campus. … Residents have known that something like this would be coming at some point,” he said.

The presentation is vague about weak points in the state’s bid, such as the lack of rail service (something that Amazon specifically mentions in its request for proposals) and the state’s poor record of funding the University System of New Hampshire (Amazon says it values a “strong university system” from bidders).

Sununu argued that the bid is strengthened by the large number of private and state schools in eastern New England.

“We have 50 major post-secondary education systems within a one-hour radius. … It isn’t just solely relying on UNH,” he said.

As for rail, Sununu said Amazon’s interest might spur another look at the controversial thought of putting passenger rail service on the train line running up along the Merrimack River.

“If Amazon wants to come and we can accelerate those plans, then absolutely that’s on the table,” Sununu said.

He noted, however, that “no rail system is bringing 50,000 employees to a single location” so that any rail proposal would be just a part of moving people. He pointed to the expansion of I-93 as helping handle any congestion.

In a shot at the competition to the south, Sununu noted that Manchester-Boston Regional Airport has room to grow its freight operations, which is likely to be attractive to Amazon, whereas he said Logan Airport’s freight capacity is “capped.”

As for housing, adding homes or apartments for 50,000 people would involve building more housing than New Hampshire has built in the last eight years, combined, but the report noted that adding so much housing would be difficult for virtually any location near a municipality on the East Coast.

And it may not be necessary, Caswell noted, since Amazon might lure back some New Hampshire residents who go to Massachusetts for jobs.

“One hundred twenty thousand people leave the state to work each day,” he said. “This is a regional workforce.”