Why does the weirdest building in Concord look so weird? 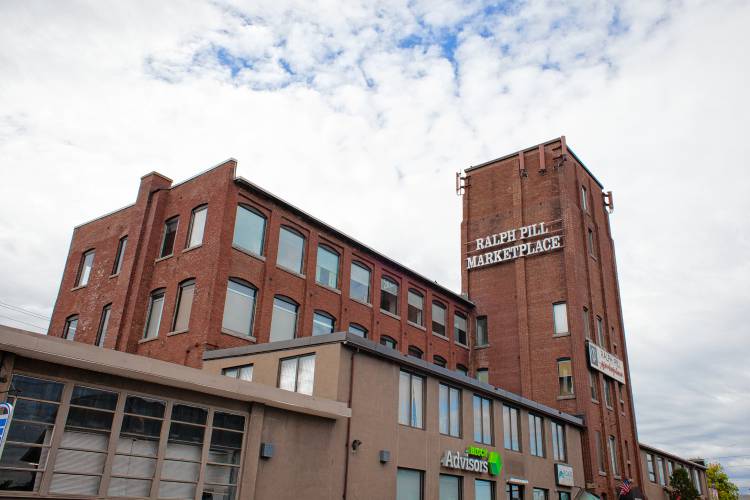 There are disadvantages to being a newspaper reporter – like salary, hours, being a cheap target for any politician/businessman/official looking to deflect attention from their flaws, and the fact that the industry is, shall we say, struggling – but it’s often an awesome job. For example, you get to answer questions that bug you like: “Why is that tower so goofy-looking?”, as I did today in the Monitor:

Although most city officials would prefer to think otherwise, for tens of thousands of drivers passing along the highway every day, the symbol of this city is not the shining State House dome or the shimmering Merrimack River – it’s a stumpy brick tower dotted with cellphone antennae.

“Everybody knows where we are,” said Jim O’Brien, director of external affairs for the Nature Conservancy, speaking from the group’s office on the fourth floor of this iconic tower. “We say ‘22 Bridge St.’ and they don’t know where to go, but we say ‘The Ralph Pill Marketplace’ and everybody knows.”

Jeff Woodward, who has taken care of the building since 1989 – much of that with his now-retired father, Chuck – agrees.

Bearing the name of a Lithuanian immigrant who created an electric-supply company a century ago, the seven-story tower of the Ralph Pill Marketplace stands over one of the city’s least elegant areas, which might become even less elegant when adjacent Interstate 93 is widened in future years.

Along with a Unitil power substation and a small building that held the city’s first electric company, the Ralph Pill Marketplace is wedged on a triangle of land between the interstate and some Boston & Maine train tracks, alongside oddly shaped but extensive parking lots.

“We looked around for offices, but nothing beats the price, the location – and all the free parking,” said Terri Hammond, director of operations for the Nature Conservancy, which for a decade has occupied the 5,411-square-foot top floor of the tower.

Although the Nature Conservancy offices are in the tower’s top occupied floor, they’re nowhere near the roof. The tower continues upward at least 30 feet above their ceiling. The area, accessible only through a trap door in the ceiling of the women’s restroom, is big and open, with wooden stairs leading up to AT&T’s equipment operating all those cellphone antennae. 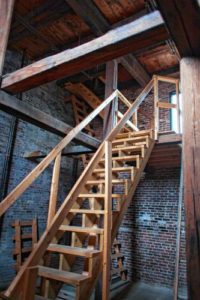 The inside of the tower at Ralph Pill Marketplace in Concord is seen on Friday, Oct. 6, 2017. (ELIZABETH FRANTZ / Monitor staff)

It’s not exactly a great use of space and leads to the question of why, exactly, the tower was built like this in the first place.

Why doesn’t it have lots of big windows, like the rest of the building and like other mill buildings built in pre-electricity days? And why is it so flat, without a dome or cupola or pointy roof in sight (although there was a short-lived effort to top it off with the old clock that now stands on Main Street)?

As noted in Crosscurrents of Change, the Concord Historical Society’s history of the city in the 20th century, the building was constructed in 1884 to lure the firm Howard L. Porter Boot and Shoe Manufactory; old-time pictures of shoe manufacturing are still on display in the main hallway of the building.

It was your classic 19th-century manufacturing design: four floors with huge windows to bring in light and an attic lit by gabled dormers. No tower.

For the rest of the story, we turn to James Garvin, former curator of the New Hampshire Historical Society, who did some research at the Monitor’s request.

“The Sanborn Fire Insurance Company map of 1899 depicts the building as a four-story building with basement and attic, the latter being used for storage. … Its fire protection (of utmost importance to the Sanborn Fire Insurance Company) consisted of a 50-foot fire hose on each floor, ‘(water) barrels each floor,’ and ‘Worcester fire pails well distributed.’ The building was then lighted by gas and its motive power was supplied by a steam engine in a boiler room at the southern end of the structure,” he wrote in response to our query.

“The next available Sanborn Fire Insurance Company map, of 1906, shows the building transformed to its present appearance. … The footprint of the six-story tower is shown, and the fourth floor of the main building (then vacant) was evidently the top of the building; no attic is mentioned.

“The map of 1906 explains the purposes of the tower. The building was then occupied by Tim & Company Shirt Manufacturing. It was electrified for power and illumination. The tower included an (electric) elevator. Fire protection for the building in 1906 (comprised) ‘Estey auto sprinklers, wet system, supplied by city water high service & also by tank in tower. Capacity of tank 20,000 gallons.’ ”

So it seems the tower was built to hold a cutting-edge electric elevator, as well as stairs, to provide better access to each floor – functions that it still provides.

And it was built taller than the existing building, and was flat, so it could support a huge water tank that fed the new sprinkler system, in the days before a citywide water system. Raising the tank above the top occupied floor increased the water pressure.

“This implies that the Tim & Company shirt manufactory had invested a considerable sum to modernize the building and bring it closer to the fire protection standards of the early 1900s,” Garvin noted.

And inadvertently create a symbol of the city that survives today.