Here’s a grumpy Christmas column for fans of good engineering 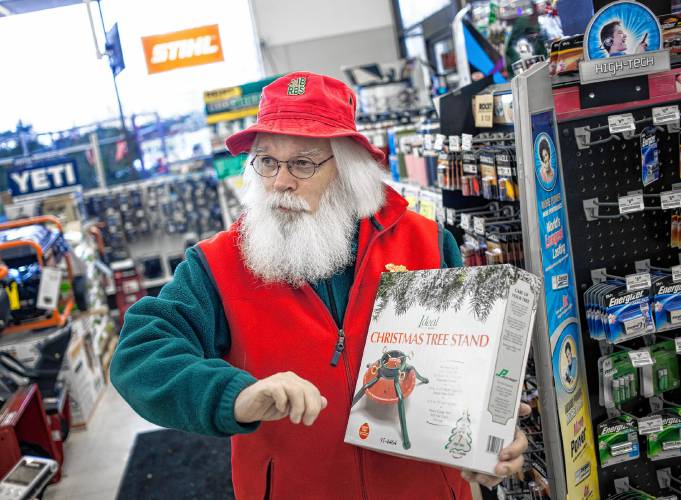 I hate the thing.

It’s that Christmas tree stand, and you know the one I’m talking about. The one with four green legs that are attached to a red tray and topped by a green crown. It includes four big, heavy screws that bruise bones when turned as you try to keep the tree in place. After a certain point, they no longer screw. Ever.

The Christmas tree stand I’m referring to looks like a spider from one of those Alien movies. Or some sort of lunar module Neil Armstrong once flew.

Miraculously, they still make the thing. I found it at the local Rocky’s Ace Hardware for $17.99. I spilled the contents onto the newsroom floor and tried to assemble it.

If Santa can’t build this thing and display his Christmas tree in a dignified way, then who can?

The man dressed in red and wearing a white beard has appearances at company parties and grade schools throughout the season. He told me his first name was Chris, and the surname of Kringle immediately popped into my head, before Santa revealed that his last name was Yellen.

That was fitting, because the Christmas tree stand I hate has caused lots of yellin’ through the years, for me, and, I learned Friday, many of you, too.

With the line growing at Rocky’s, I mentioned to manager Tom Worthington that I wanted to write about the Christmas tree stand that has caused more holiday aggravation than in-laws and uncles.

The people standing closest to the cash register knew right away what I was referring to. They laughed. They rolled their eyes. They flashed back to those dark days, of those four legs and that tray and that crown.

It looked perfect in the picture on the box. It seemed so easy to build, according to the directions on the box.

“Like 40 years ago I had it,” Peggy Lynch told me outside Rocky’s. “It has never worked well. You twist the screws and you could not get the tree straight, and you needed two people to get it straight.”

Worthington gave me a little history lesson, saying, “That particular stand is one of the original stands, one of the first ever made. It doesn’t hold a lot of water, but it’s inexpensive for someone who may be getting a small tree.”

Resourceful, Worthington said he “had one of those years ago and I actually screwed it to a piece of plywood and it lasted many years. Its legs are rickety. It depends on the size of the tree and how long you will have it there.”

Over in the Thirty Pines parking lot, I found twin sisters Tami O’Neill and Trisha McCoo of Loudon gassing up. Both had experience with the tree stand I hate.

“You see that (the tree) is still crooked when you get underneath,” O’Neill told me. “So you have to loosen them up again and then tip the tree a certain way and then re-tighten them again. You turn them and it hurts your hand.”

“The screws would go into the tree,” McCoo said, “and then the tree would kind of wobble.”

Then, at Cole Gardens on Loudon Road, I found some optimism, some Christmas cheer that made me feel like Scrooge.

Tom Gagne of Concord, who was shopping at the time, had a simple solution for the tilted tree syndrome.

“It’s old fashioned,” Gagne told me. “You put it in and screw it in and it leans a little bit. Just a magazine under it, straightens it right up.”

Charlie Cole, an owner in the family business, agreed with me about the infuriating nature of this Christmas tree stand.

But he also said it’s a regular part of the season, like eggnog, Rudolph and The Nutcracker.

“It’s classic,” Cole told me. “The one with screws and you twist and you get angry about it, but that’s a classic tree stand and I’m a traditionalist. It’s the experience of putting up that tree and trying to get it right and not getting too angry. It’s just patience, patience, patience.”

I hate the thing.