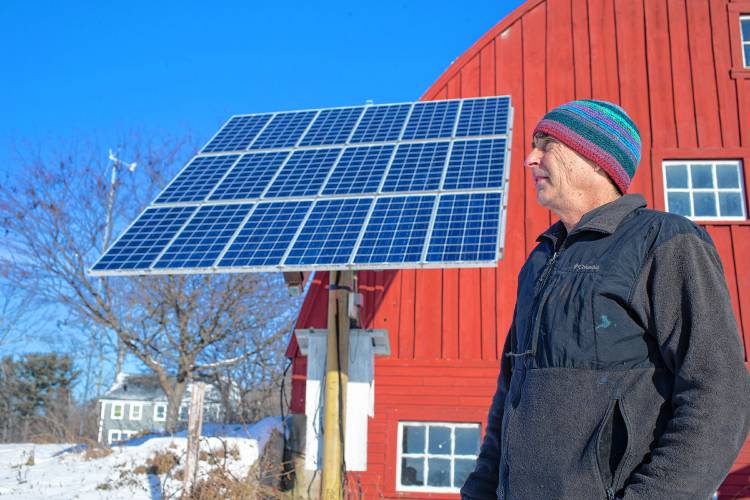 Tim Meah in front his 1993 solar array near the barn on his property in Canterbuty on Monday, December 11, 2017.

This is one of two stories that are part of my search for the oldest operating solar panels in New Hampshire. If you know of a photovoltaic (solar electricity, not solar hot water) system in NH that has been operating continuously since before 1985, email me: dbrooks@cmonitor.com

The 18 solar panels at the south end of the big red barn on North Family Farm in Canterbury may not be the oldest solar array in New Hampshire, but they’re close. And they may hold a more important title.

“I wouldn’t be surprised if it’s the oldest grid-tied system,” said owner Tim Meeh, who put up the array in 1993, almost a quarter-century ago.

The change in laws and regulations that allowed solar panels to be tied into the power grid, letting owners sell off excess electricity in a system known as net metering, was the major factor in the growth of solar power in the U.S. in the past decade. If this Canterbury array really is the oldest grid-tied solar system in New Hampshire, it’s of true geek-historical interest, which is why I visited it. (I’m still looking for the oldest constantly working solar panel in New Hampshire; if you have a nominee, email me: dbrooks@cmonitor.com.)

Its noble history doesn’t mean this array is still geekily impressive, however. In many ways, technology has passed it by.

For one thing, the panels all feed into a single inverter, the system that changes their direct current into the AC current that can be used by North Family Farm, rather than having individual micro-inverters. This makes the array less efficient and vulnerable to problems. The inverter is also so old that it can’t hook into any network; the only way for Meeh to check the output is to trudge past the barn and peer at the readout.

The array does have a solar tracker that turns the panels during the day to keep them facing the sun for higher output, but it has been on the fritz for years. Meeh said the tracker increased output enough to cover its own power costs but not much more, so he hasn’t bothered fixing it.

The panels’ output is pretty meager, too, with a maximum production of 918 watts, or 51 watts per panel. Modern panels of the same size produce five times as much electricity.

Finally, the system was really expensive by modern standards. Meeh said it cost roughly $8,000 to install the array, or $8.70 a watt. These days an array in New Hampshire costs less than $3.50 a watt installed – sometimes much less.

Despite all these drawbacks, North Family Farm’s solar array is chugging along, as it has done for almost 10,000 days in a row. Every time the sun peers out from behind a cloud, the panels begin feeding current into the farm or into New England’s power grid, with almost no maintenance and no fuel costs.

On Monday, Meeh reported, at its peak (midday sun, nice cold temperatures that make the electronics hum), the array produced 795 AC watts, or 87 percent of its maximum. For comparison’s sake, he said, the new array nearby – 5 years old – was producing 5,322 AC watts or 89 percent of its DC rating.

“It looks to me that the old array might be showing age-related derating of about 2 percent compared to the newer array,” he wrote in an email. “It seems the old array is holding up pretty well.”

That’s incredibly good and probably not the norm for old solar panels. But it’s hard to think of another useful technology, and certainly no energy-producing technology, that could hope to be so productive after being mostly ignored for a quarter-century.

That’s what a lack of moving parts can do (as long as you skip the sun tracking system).

By contrast, consider the 160-foot-tall wind turbine standing on the far side of Meeh’s house. It pumps out about 8,000 kilowatt-hours of electricity a year, roughly the same as all of Meeh’s solar panels, but it has to be lowered at least every few years to replace the leading edge on fiberglass blades that degrade over time.

Luckily for Meeh, he owns a working farm and has access to machinery that can bring down a 14-story tower for maintenance, but this is still a non-trivial cost. Add expected repairs over time for machinery that spins thousands of times a minute, and you’ll see one reason why small-scale solar has taken off while small-scale wind is still a niche.

At North Family Farm, the main crops are hay and maple syrup; it no longer milks cows or has other animals. Meeh said the wind turbine and solar panels generate more electricity than the farm uses over the course of the year.

Meeh is an old hand at the renewable energy game. A real local boy – he grew up in a big brick house just north of Canterbury Shaker Village and built his farm on the adjoining property – Meeh had to fight with what was then PSNH when he first installed a wind turbine that turned his power meter backwards. In the days before net metering laws, this annoyed the power company, which installed ratchets on the analog meter so it couldn’t run backwards anymore, he said.

He also has solar thermal panels on the roof for hot water, but he agreed that photovoltaics – creating electricity with solar panels – is the most promising approach for individuals, even if it has taken a while to catch on.

“I am not surprised that it has taken so long,” he said, when I asked whether he figured in 1993 that photovoltaic systems would still be unusual in 2017. “There’s the price, and there’s resistance from oil and utilities,” he said.

“But that’s changing,” he added.