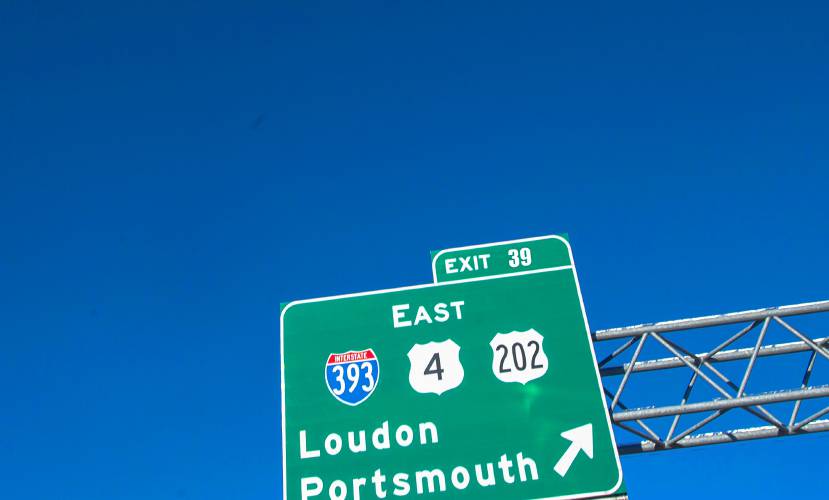 But don’t panic. This is not a change that’s going to happen anytime soon, and you can probably guess why.

“We have estimated that changing the exit numbers on the divided highways in New Hampshire would cost upwards of $1 million or more,” wrote state traffic engineer Bill Lambert in response to the Monitor’s query about the not-exactly-earthshaking topic of highway exit numbers.

We queried Lambert because Rhode Island is changing its highway exit numbers to comply with a federal mandate and we wondered if New Hampshire was next. That mandate, which is more like a stern suggestion, says exit numbers on interstates and turnpikes should not be consecutive, in which the first exit you encounter is Exit 1, the second is Exit 2 and so on, as they are in New Hampshire. Rather, it says they should be mileage-based, indicating how far you have traveled from a certain point.

This statement is found in the Manual on Uniform Traffic Control Devices, which since 1971 has argued that mileage-based exits are better because “if new interchanges are added to a route, the highway agencies do not have to change the numbering sequence” and because it “assists road users in determining their destination distances and travel mileage.” That second advantage is fading in the age of GPS, but it still exists.

The manual, which is revised every few years, has long preferred mileage-based numbering, but as of the 2009 edition it switched to the verb “shall,” which gives the suggestion more weight. It’s not like New Hampshire is going to lose federal highway funding if we don’t switch, but there’s definitely some urgency to the suggestion, presumably out of the desire for national consistency.

I suppose the fear is that out-of-state drivers who are told the State House is at Exit 14 will get off the highway after driving 14 miles and be lost forever in Merrimack.

Despite the mandate, there are no plans in the works for New Hampshire to make the switch. The work would have to be paid for within the 10-year transportation plan and okayed by the governor and the Legislature – in past discussions, the House Public Works and Highways Committee has not supported taking $1 million or more from the State Highway Fund to pay for it.

Massachusetts also has consecutive exit numbers. In that state there is talk of making the change, with one legislator even submitting a bill to make it happen, but nothing has been set in stone and it seems years away, at best.

Rhode Island has just finished making the switch, although that state is so dinky you’ll hardly notice. Exit 3 on Interstate 295 is Exit 5, Exit 4 is now Exit 7, and Exit 3B actually remains Exit 3B.

Things would be more noticeable if the change was made in New Hampshire. The I-93 exits north of the White Mountains would expand into three digits. It was also noticeable when Maine switched in 2003, turning the northernmost Interstate 95 off-ramp from Exit 62 into Exit 305 – or Exit 491, if its proximity to Canada makes you prefer the metric system’s kilometers.

Some Mainers are still adapting.

“There was a lot of mental adjustment going on,” said Portland Press-Herald columnist Bill Nemitz. “It you have an exit with a number, they become geographic locations unto themselves. For example, there’s an exit on Westbrook-Portland, if you ask me what exit number it is, I couldn’t tell you – all I know is that it’s Exit 8, because everybody always referred to it that way, and they still do to this day.”

For years, Maine helped slow-to-change drivers by putting the old exit number on signs as well as the new number, but eventually it took down those reminders.

“I didn’t really pay attention to the new numbers until they took the old numbers down a few years ago,” said Greg Kesich, the Press-Herald’s editorial page editor. He admits the mental adjustment has been rocky, which is why he has fallen back on sports mnemonics.

“I’ve been able to remember them through baseball. So instead of 6A I get off at 44, which is Hank Aaron’s number,” Kesich said.

Neither man could recall much controversy from the switch, in contrast to Maine’s recent political history where any change whatsoever seems to require a statewide referendum and a veto override or two.

My guess is that things would get fairly obstreperous if the New Hampshire Department of Transportation sought to spend a million bucks just to renumber exits.

The process is so expensive, wrote Lambert, the state traffic engineer, because it has to be all or nothing: “It isn’t a change that a state can make as they replace existing signs. It has to be done for the entire length of the highway.” And our interstates and turnpikes have an awful lot of signs.

At a time when New Hampshire has trouble getting enough money to keep our bridges standing up, it seems unlikely there will be much of a push to renumber exits.

So don’t worry, you’ll still be able to visit the Museum of New Hampshire History by taking Exit 14 and turning left. That won’t change.