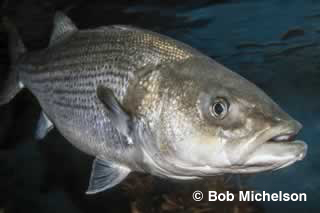 Run away, little salmon! (Photo from NH Fish and Game)

Attempts to bring the Atlantic salmon back to New Hampshire have pretty much fizzled – we’ve given up on the Merrimack River and virtually given up on the Connecticut River.  These fish breed in fresh water and live in the ocean so they are hit by changes in both ecosystems, including the dams that keep them from returning upstream to breed. It’s no wonder they’re struggling. Even up in eastern Canada, where they do much better, there are problems.

One of the obstacles they face is striped bass, an imported species stocked in rivers and lakes because fishermen love to catch them. Bass are predators of young salmon but it has long been a debate about how serious this is. The issue pits one set of fishermen against another, so it’s kind of touchy.

A new study from New Brunswick adds fuel to this fire. Following is a writeup by the Atlantic Salmon Federation, so it’s not entirely from a disinterested source:

Out-migrating juvenile Atlantic salmon in New Brunswick’s Miramichi River are being consumed by striped bass at a much higher rate than previously believed.

A new study published in the Canadian Journal of Fisheries and Aquatic Sciences suggests approximately 18 per cent of juvenile Atlantic salmon from the Northwest branch of the Miramichi River are eaten in some years as they attempt to migrate through the estuary. Inferred predation rates for salmon smolts leaving the Southwest branch of the Miramichi River were lower, but still significant as described below.

Tiny acoustic transmitters were inserted into the abdominal cavity of 514 salmon smolt from 2013-2016. One hundred and ten striped bass were tagged in the fall of 2013.

Receivers to detect the surgically implanted transmitters were placed throughout the Southwest and Northwest Miramichi rivers, in Miramichi Bay, and across the Strait of Belle Isle, approximately 780 kilometres away.

First, the movement of each species was analyzed to determine typical patterns. Then the abnormal movement of some tagged smolt was compared to the known profile of striped bass.

“We noticed some of the tagged smolt would exhibit behaviours very similar to those of striped bass,” said ASF biologist Jason Daniels, the study’s lead author. “Using statistical models, we determined the likelihood that these salmon, along with their acoustic tags, had been consumed by striped bass.”

While Atlantic salmon throughout the Gulf of St. Lawrence have experienced a multi-decade decline in abundance, striped bass have exploded from less that 5,000 spawning adults in the 1990s to approximately 318,000 in 2016.

The Gulf of St. Lawrence striped bass population has only one known successful spawning location, below the head of tide in the Northwest Miramichi River. The spawning aggregation of striped bass overlaps with the out-migration of salmon smolts.

As a result, the Northwest Miramichi suffered average predation rates of 15.3 per cent during the study compared to 8.6 per cent for the Southwest branch, where juvenile salmon are less exposed to the concentration of striped bass. Comparisons also indicate an effect on the overall juvenile population.

“Since striped bass numbers began to climb we’ve seen consistent declines in the survival of Miramichi salmon smolts, a trend that is not apparent on ASFs other Gulf of St. Lawrence study rivers, the Restigouche and Cascapedia.” said Daniels.