The cougar is extinct, long live the cougar!

The eastern cougar is a subspecies of the big cat also known as mountain lion,  puma, catamount and a few other names. It once existed throughout the Eastern Seaboard, but it was declared extinct by the U.S. Fish and Wildlife Service in 2011 because it hadn’t been seen since 1938. Last week, in one of those odd-sounding moments necessitated by large bureaucracies, USFW officially dotted the final paperwork i’s and removed it from the endangered species list.

This does not mean that all mountain lions in the U.S. are extinct, of course – just the one subspecies. Mountain lions are actually doing pretty well out West and are spreading throughout the Midwest, and they are slowly moving our way. But they aren’t here yet. 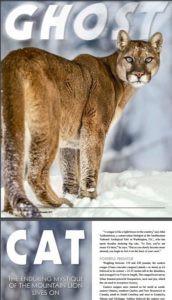 No they’re not, despite what that friend of yours swears he saw when driving on that back road recently and what you read online.* I’m confident making that statement because if they were here we’d have photos of them taken by one or more of the gazillion critter cams that exist in the the woods. As evidence, consider how NH Fish and Game knows that Canada lynx, which are at least as shy as mountain lions, exist in New Hampshire in small breeding populations: Because they have photos of them, as well as tracks and other solid evidence.

Check the Fish and Game webpage about mountain lions – they’ve got a night video that you or I would swear is a mountain lion. It’s a bobcat.

Lynx are here but mountain lions aren’t – yet.

*Yes, I know about the one killed by a car in Connecticut. Exception that proves the rule, as they say.