The largest plant eradication effort in U.S. history tried to halt stem rust; UNH is working on it, too 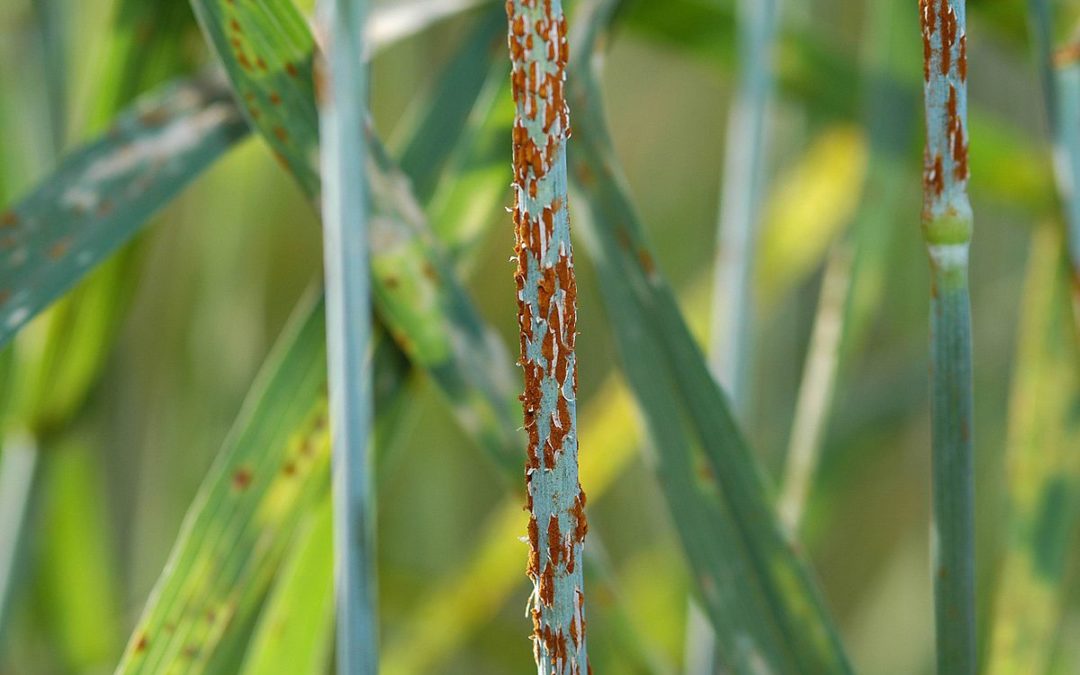 From UNH News Service: Stem rust is one of the most feared agricultural diseases in the world, infecting wheat and other cereal crops. The fungal pathogen is capable of severe epidemics, thus presenting a threat to the global food supply. In New England, the disease is a concern in light of the region’s re-emerging small grain industry.

Scientists with the New Hampshire Agricultural Experiment Station at the University of New Hampshire are trying to understand the potential risk of the disease spreading and, perhaps even more importantly, evolving greater virulence in the region. Long term, they also hope to contribute to a genetic solution that reduces global yield losses to the disease.

According to the Durable Rust Resistance in Wheat project, stem rust spores arriving as late as one month before harvest can turn a previously healthy crop into a tangled mass of stems, which produces little to no grain. The 1953 pandemic in North America resulted in the loss of 40 percent of North America’s spring wheat crop. Pandemics have been noted throughout history, with significant events occurring in South Asia, China, Central Asia, East and Central Europe, North America and elsewhere in the past 130 years. In New England, a region outside the federal barberry eradication zone of the 20th century, environmental conditions conducive to rust infection and the abundance of barberry should be causes of concern for producers of wheat, barley, and other small grains.

Colonial immigrants introduced European Barberry to New England for its barks reputed medicinal qualities and other properties. Today in New England, European barberry and Japanese barberry grow so abundantly that both are classified as invasive species. A hybrid of these two species, though relatively rare, is known to occur throughout the region.

European barberry is infected by the stem rust pathogen, allowing it to complete its life cycle and for the pathogen to evolve ever more destructive races. It is this association between European barberry and the stem rust pathogen that led to the largest plant eradication effort in U.S. history. Between 1918 and 1973, more than 500 million common barberry plants were destroyed throughout the North Central plains in a largely successful effort to stop the occurrence of wheat stem rust epidemics in the United States.

“While European barberry functions as a host of the stem rust pathogen, Japanese barberry does not. As for the hybrid between them, nothing was known,” Bartaula said. “In our research, we are using the hybrid to gain an understanding of the mechanism of Japanese barberry’s resistance. At the same time, we are investigating the relevance of all three species (European, Japanese and hybrid barberry) to the spread and evolution of stem rust our region. Given the growing interest in revitalizing the small grain industry in the New England, understanding the role of the sexual host in rust epidemiology is very important.”

The experiment station researchers conducted field surveys of natural populations of European barberry, Japanese barberry, and their hybrid and tested all three species for their responses to stem rust disease. As expected, all European barberry samples were susceptible and all Japanese barberry samples were resistant. However, the hybrids exhibited both susceptible and resistant reactions. Building on this result, the researchers are using genetics to identify the genes responsible for Japanese barberry’s resistance to stem rust.

“In the big picture, we would like to understand Japanese barberry’s defense strategy against this complex pathogen. Our hope is that insight into the mechanism of disease resistance in the sexual host may contribute to the global effort to develop varieties of wheat that are immune to this historic disease,” Bartaula said.

A wheat stem rust race that could arise in New England as result of using nonresistant wheat varieties in the presence of abundant regional barberry plants might have not only regional, but global catastrophic consequences. “There is much benefit to be realized with a revitalized, local small grains industry, but we need to be smart about it. Producers should eradicate barberry plants near their fields and commit to growing varieties resistant to modern races of rust,” Bartaula said.

This material is based upon work supported by the NH Agricultural Experiment Station, through joint funding of the National Institute of Food and Agriculture, U.S. Department of Agriculture, under award number 233561, and the state of New Hampshire. This work also is supported by the Bill & Melinda Gates Foundation through the Durable Rust Resistance in Wheat and Delivering Genetic Gain in Wheat projects. This research was presented recently at the 2018 NH Farm and Forest Expo.