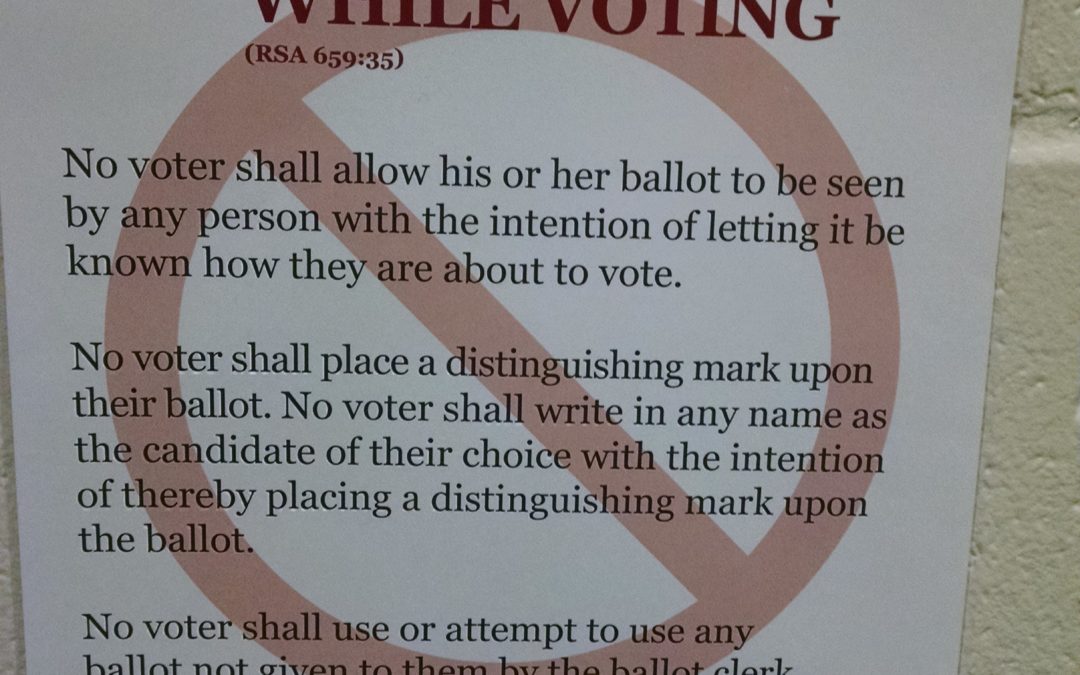 The cautionary poster in 2018 polling places.

One of the most intriguing, if not vital, stories swirling around New Hampshire voting in the past four years has involved “ballot selfies”, or photos of your own completed ballot that are posted online.

In 2014 the state made them illegal, a modern reflection of centuries-old efforts to keep balloting private. But lawsuits from the ACLU (many political conservatives agreed – this is a non-partisan issue) opposed the law and it was overturned by 2016. As a result, the warning poster on New Hampshire polling places, shown above, no longer cautions against them. Compare it to the poster from 2014: 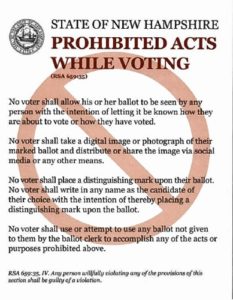 The polling place poster from 2014, when ballot selfies were still verboten.

You’ll notice from the current poster that a related activity – marking your ballot so that it can be recognized later one – is still illegal. Why? The concern has always been that if you can confirm to somebody else that you voted in a certain way, your vote will be open to bribes or threats. As long as nobody can confirm how you actually voted in the polling booth, there’s no value in trying to force you to vote one way or the other.

With ballot selfies, however, your boss or spouse or union rep or whatever can demand that you vote for some warrant item or officer and then ask to see a photo proving it. Very awkward, if you don’t happen to agree with them.

That’s why last year I showed how you can fake your ballot selfie! The instruction, complete with video, is right here.

Incidentally, I believe that I was the first person to use the phrase “ballot selfie” in print, in a story for the Nashua Telegraph. I’m not certain about that, but I’m pretty sure.