At a big enough scale, N.H. is like a washboarded dirt road 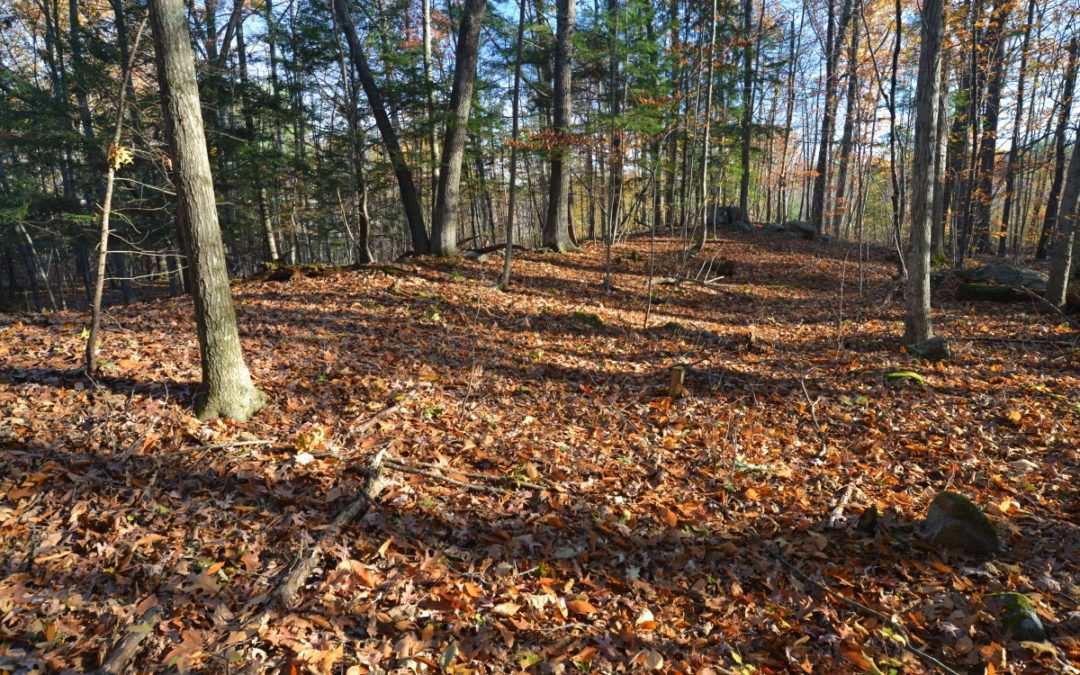 Photo of leaf covered narrow-crested moraine. View is along the ice-distal flank in foreground towards the crest. Photo Credit: Joseph Licciardi/UNH

From UNH News Service: Take a drive through the countryside near the New Hampshire Seacoast and you might notice a series of tiny rolling hills that look like regularly-spaced ridges. While the repeating pattern may be eye-catching for drivers, and sometimes challenging for bicycle riders, researchers at the University of New Hampshire say they may also hold answers to how glaciers helped form the current terrain and provide insight into the progression of climate change.

In their study, recently published in the Journal of Quaternary Science, the researchers used data collected from extremely high-resolution LiDAR (light and detection ranging) laser scans of the region to discover that the landscape was riddled with washboard-like ridges. To figure out how they formed, the researchers identified and mapped all the ridges they could find in the area; measured their dimensions, dug into them with an excavator and examined the way the sediment had settled into place, and used radar to “see” below the ground surface. Their research found that each ridge marks a spot where the edge of the great continental ice sheet either paused or pushed forward for long enough to pile up or bulldoze a ridge of debris in front of it. The ridges, known today as De Geer moraines, were left behind as the ice melted. 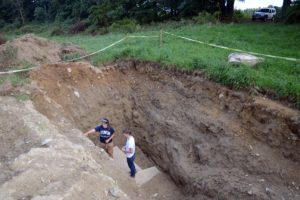 : Researcher Sam Sinclair ’15 inside one of the ridge digs examining the way the sediment had settled.
Photo Credit: Joseph Licciardi/UNH

“Our evidence shows that each ridge represents one year,” said Joe Licciardi, professor of Earth sciences. “If we count them up, we can figure out how long it took for the ice to retreat, or melt away from this part of New Hampshire, a little over 15,000 years ago at the end of the last ice age.”

The evidence suggests that one ridge formed each year as the ice sheet oscillated back and forth, most likely by pushing forward in winter and retreating in summer. De Geer moraines only form in certain specific areas around the world and had not been recognized in New Hampshire until recently. The researchers say identifying the origin of these ridges helps determine an annual record of ice retreat across this part of New Hampshire and may hold answers to the effects of climate change.

“If you can understand what happened in the past, and how fast or slow the ice melted,” said Licciardi, “it can help us understand what is going on in the present day and maybe even help us more confidently predict what might occur in the future.”

The researchers say the LiDAR scans were instrumental in helping to reveal a whole new world that was not previously visible on satellite images, topographic maps, or even by simply driving around. They say the high-resolution laser helped to unveil scientific clues that were lying in plain sight and yet remarkably went unnoticed until now.

Co-authors on this study include two other UNH researchers; Samantha Sinclair ’15 and Brian Madore ‘13; as well as Seth Campbell with the U.S. Army Cold Regions Research and Engineering Laboratory.