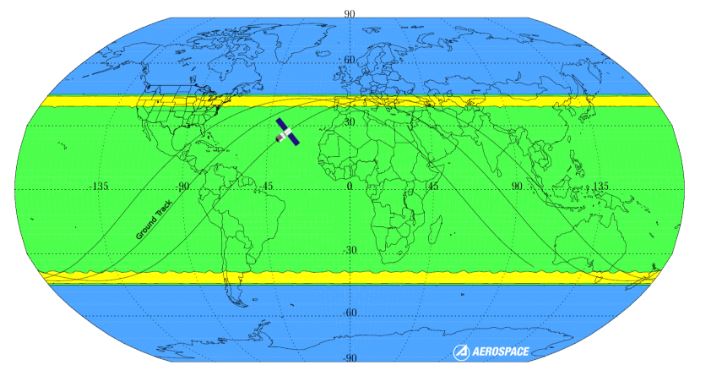 It's hard to see here, but NH is in the blue area, where the Tiangong-1 can't fall.

I am happy to say for my fellow New Hampshire residents that we are too far north for the out-of-control space station Tiangong-1 to land on us, but our friends on the south side of the border with Massachusetts might want to keep an eye on the heavens.

In its orbit around the planet, the space station does not go further north than 42.7 degrees, which is almost exactly the latitude of the long portion of the state border between New Hampshire and Massachusetts. This means that when pieces of the debris plummet through the atmosphere they can’t fall on, say, the BAE Systems buildings in Nashua but can fall on the old Wang building in Lowell, Mass.

(Update: Less than five minutes after I posted this on Facebook, a reader responded: “That’s under 3 miles south of the state line. Wind currents, lift, and fluttering (like a falling leaf) could drift debris north of the orbital inclination.” Maybe I’m overly optimistic.)

As I’m sure GrantieGeek readers already know, Tiangong-1 is a small (18,000-pound) space station launched by China in 2011. china admitted in 2016 that they had lost control of the space station; since then, it has been slowly falling.

Current predictions put the station’s re-entry into the Earth’s atmosphere as being over the Easter weekend, between March 30 and April 2.

It’s highly unlikely that the station will land on anybody, although there is a small chance it could break up over a populated region, and some estimates suggest that between 10 and 40 percent of it could make it to the ground.

You can keep track of where it’s actually going to fall at this website, courtesy of IFLscience.