There’s something about the term “waste heat” that just cries out for a clever engineering fix. Heat can do work, so if an industrial process or power production creates too much of the stuff, why can’t we make use of it?

Joe Kellogg, who works with weird materials known as shape-memory alloys in a crowded machine shop in southern New Hampshire, thinks his tiny startup might have figured out how to do that – although it’s taken him quite a while to get here.

“I would not recommend this, trying to do something this off-the-wall,” said Kellogg, 34, of his five-years-and-counting effort. “You have to be prepared for an absurd failure rate; in fact, you have to be surprised when you don’t fail.”

Kellogg said he has developed an alloy of titanium that changes shape when exposed to heat at such a rate that it can use excess heat generated by power plants to push hydraulic fluid and turn a generator, creating electricity. He’s in the process of putting together a consortium of small utilities and companies interested in testing prototypes that can produce 50 kilowatts of electricity from a temperature swing of barely 20 degrees.

This sort of thing has been theoretically possible for decades. The U.S. Navy held a conference back in 1978 to spur research into using thermal shape-change alloys to generate power, and there are many similar shape-changing titanium alloys, known as nitinol.

But when comes to industrial processes, theoretical and practical often fail to overlap. If Kellogg can make this succeed in real-world power plants, it would be a big deal. 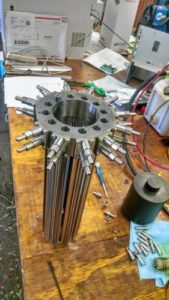 A prototype – the thin vertical rods expand and contract, sending hydraulic fluid out the tubes to turn a generator.

Kellogg said the decades-long lack of success with shape-changing alloys fuels many conspiracy theories about The Powers That Be suppressing world-changing discoveries. He gets emails about them at least once a month, but he has a better explanation for what has, or rather hasn’t, happened: “Our understanding of this material is very poor.”

Note, by the way, that I do not have the expertise to judge Kellogg’s claims. They sound feasible, which is why I agreed to check him out when he sent me a query out of the blue. But as you know, dear reader, it’s always wise to keep a supply of skepticism on hand when an independent inventor claims to have solved a problem that has stumped everybody else.

Kellogg Research Labs, as the company is called, is certainly independent. It is self-funded, and the only outside employee is one salesman in Silicon Valley. Kellogg’s wife, Mingming, a chemist, helps out in the firm and her day-job salary helps the bottom line, as does Kellogg’s contract engineering work and a surprisingly brisk business selling shape-changing springs and raw materials online.

Kellogg’s system, which he calls Electricity From Air, uses long thin rods of alloy in parallel inside a hydraulic pump, each about a half-meter long and much thinner than a pencil. He said they have a thermal efficiency of 6 percent, compared to 1 percent for similar alloys.

“That sounds really small, but it’s a game-changer,” he said.

Kellogg is testing a 3-cubic-meter assembly that would contain the hydraulic system. Inside, a dozen rods would expand and contract every three seconds as hot and cold water was applied, pushing hydraulic fluid that would turn a generator. The rods’ length changes a mere 3 percent or so, Kellogg said, but he thinks that is enough to be viable.

Importantly, he said his version of the alloy needs a temperature range of only about 20 degrees between hot and cold to change shape sufficiently, while other materials need roughly 60 or 70 degrees. That makes extracting useful work from the amounts of waste heat in power plants more feasible.

The best-case scenario is that a big enough collection of these generators could add 10 to 15 percent to the output of a power plant burning the same amount of fuel. An extra bonus is not having to get rid of that waste heat.

“The No. 2 expense of most power plants is regulatory compliance because they’re dumping so much heat into the environment,” Kellogg said.

Merrimack Station power plant in Bow, for example, uses so much Merrimack River water to cool its operations that the EPA has threatened action unless it reduces the amount of warmed water that gets dumped back into the river. The plant’s new owners would love to turn some of that heat into sellable electricity.

Kellogg is from upstate New York and moved to New Hampshire after getting his mechanical engineering degree in 2013 when his wife got a job. He said New Hampshire’s small government is both a blessing and a curse for a startup.

“They’re not there to help, but they’re also not there to hinder,” he said. An example: New York has an energy startup fund that can be tapped, which is nice, but regulatory workplace inspections are easier in New Hampshire, which is also nice.

On balance, he said, “I think the lack of hindrance is worth more than the help the government could provide.”

Kellogg praised New Hampshire government for being “flatter” than many others: “The gap between the person at the front desk and the governor is smaller than anywhere else I’ve been.”

This is where I could insert a joke about politicians and waste heat, but I’m above that sort of thing.