Glass is made from sand, so can it be used in place of sand? 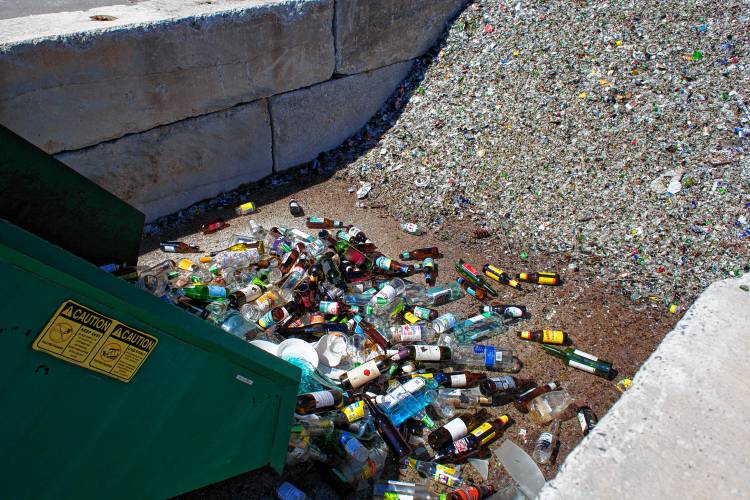 A bin full of recycled glass is dumped at the Warner Transfer Station in Warner on Thursday, April 5, 2018. (ELIZABETH FRANTZ / Monitor staff)

(Note: The May 15 Science Cafe NH in Concord is going to discuss the technology and markets of recycling, prodded by stories like this.)

As municipalities wrestle with marketplace changes that are making it almost impossible to recycle glass, the second “R” in the environmental slogan Reduce-Reuse-Recycle is becoming more attractive.

In the town of Warner, the attraction of reusing rather than recycling glass has been obvious for decades.

The town grinds up the bottles and jars that residents drop off and uses the resulting material as a substitute for gravel or sand. After the glass is crushed, it looks surprisingly drab and is sometimes given the punning name “glassphalt,” in various construction projects.

“We have just an old grinder that has been converted to beat up the glass,” said Tim Allen, the town’s director of public works. He said the town generates around 80 to 90 tons of material a year, which is used along with gravel and sand, or even in place of it, for such things as roadbeds or doing remediation work at the town gravel pit.

Warner may have been ahead of the curve but it’s not alone in seeking to turn residents’ glass into usable material. In nearby New London, Director of Public Works Richard Lee is such an advocate of crushed glass that he’s featured in a video from the Northeast Resource Recovery Association, a recycling industry group, in which he talks about how properly processed, it can be used to make the surface of roads without endangering rubber tires.

The NRRA is trying to increase reuse of old glass in construction. It owns a portable crusher that it takes to various collection points around the region to help communities that don’t have their own systems.

The video also discusses research by the U.S. Army Corps of Engineers that said processed glass aggregate is as good or better than gravel in terms of “frost susceptibility,” or the ability to cope with the expansion and contraction of freezing water during winter.

Elsewhere, efforts are underway to develop other uses for recycled glass, including a new factory in Philadelphia that seeks to use glass to replace aggregate in making concrete, or to use foaming agents with it to create a lighter-weight filler material.

The reason for all this activity is that the obvious thing to do with glass – turning old bottles into new bottles – is increasingly difficult. The major reason is that fewer things are packaged in glass, as compared to plastic, these days, so the market for recycled glass is shrinking.

The problem has been growing for several years but really hit home for New England in January when a bottle-making factory in Medford, Mass., closed because of a decline in business from national beer companies. It annually bought some 2,000 tons of “cullet,” the industry term for recyclable glass.

Combine this market decline with the difficulties of handling glass, keeping different colors of glass separate, and keeping out similar but unusable material that often gets mixed with bottles at transfer stations, like window glass and ceramics, and recycling glass has become almost impossible.

“It’s a problem nationwide. There are a number of places that have gone back to trashing it – done so reluctantly,” said Proper. “The problem with reclaiming glass, recycling it back into a glass bottle, is that you have to hit such a degree of purity that it’s very hard in a post-consumer state. One bottle cap or the wrong color glass can really foul the whole mix.”

Turning used bottles and jars into what is officially called processed glass aggregate has long been encouraged by the state, which instituted rules back in 1999.

“It can be used in public works and other construction systems, including materials for roads, bedding for pipes, and filler around retaining walls and foundations,” said Jaime

Colby from the solid waste division of the Department of Environmental Services.

The only limits are that it can’t include pieces larger than an inch in diameter and can’t be left exposed or uncovered.

That latter issue is why Warner doesn’t use crushed glass around culverts that carry streams under roads, said Allen. If the culvert gets washed out during flooding, the glass might be exposed.

Such reuse is becoming more important as China, which has long been the world’s largest market for used material to be recycled, cracks down on the amount and quality that it will purchase. This crackdown has sent the price of most recycled materials such as paper, rubber and tin plunging, turning many profitable municipal recycling programs into budget sinkholes.

The environmental benefits of recycling remain, of course. That includes not only keeping material out of landfills but the fact that recycled items almost always require less energy to make than items from raw materials.