Earthquakes in the East are felt over larger areas, even though they’re less powerful 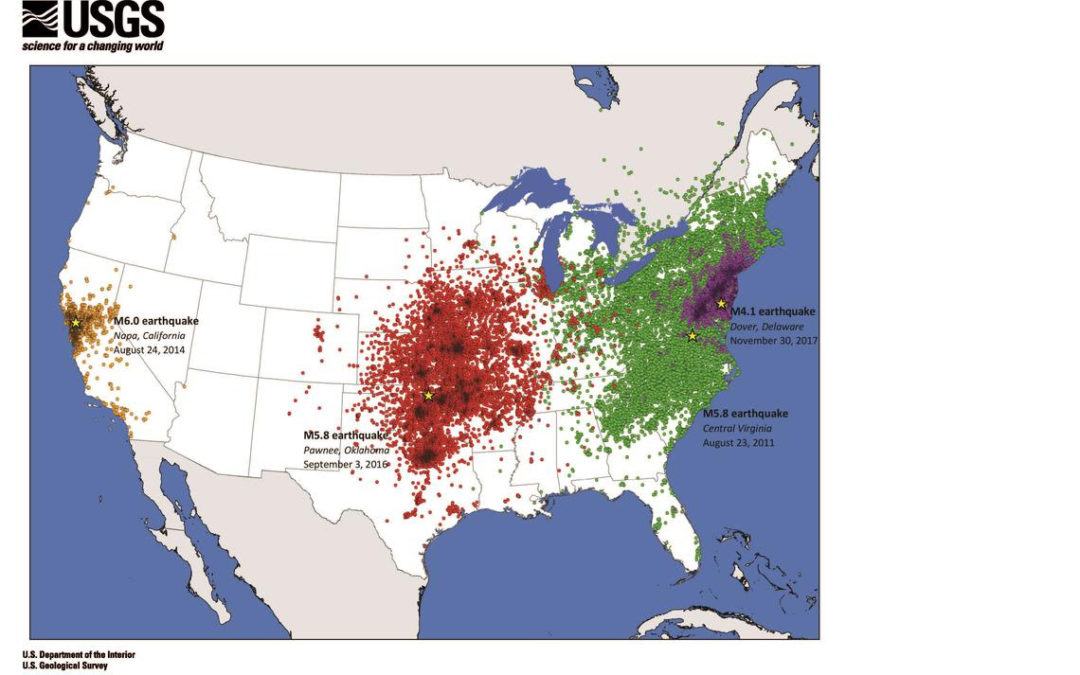 Map of USGS “Did You Feel It?” data shows that earthquakes east of the Rocky Mountains are felt over larger areas than earthquakes in the West.

From US Geological Survey: Earthquakes east of the Rocky Mountains can cause noticeable ground shaking at much farther distances than comparably-sized earthquakes in the West.

A magnitude 5.8 earthquake in 2011 in Mineral, Virginia, was felt up to 600 miles from the epicenter. Tens of millions of people in the eastern United States and southeastern Canada felt this earthquake.

For comparison, a magnitude 6.0 earthquake in 2014 in Napa, California, was felt only as far as 250 miles from the epicenter. Despite the Napa earthquake releasing about twice as much energy as the Virginia earthquake and causing much more damage near the epicenter, it wasn’t felt nearly as far away.

As another example, the magnitude 4.1 earthquake that occurred in December 2017 near Dover, Delaware, was felt approximately 200 miles from the epicenter. The region that felt this earthquake is about the same size as that of the much larger California event, which released about 700 times more energy.

Scientists are researching a variety of factors that influence regional differences in the intensity and effects of earthquakes. Some of the factors have to do with the nature of the underlying tectonic plates and their geologic history. Others are connected to the size and age of buildings.

The western United States lies along the boundaries of major tectonic plates that make up the Earth’s crust—the North American Plate and the ocean plates to the west. These plates are moving against each other, breaking up the crust along many faults like the San Andreas Fault. Faults in the East are less active and lie entirely within the North American Plate.

Eastern North America has older rocks, some of which formed hundreds of millions of years before those in the West. These older formations have been exposed to extreme pressures and temperatures, making them harder and often denser. Faults in these older rocks have also had more time to heal, which allows seismic waves to cross them more effectively when an earthquake occurs.

In contrast, rocks in the West are younger and broken up by faults that are often younger and have had less time to heal. So when an earthquake occurs, more of the seismic wave energy is absorbed by the faults and the energy doesn’t spread as efficiently.

More Vulnerable Infrastructure in the East

An example of the earthquake hazard in the eastern U.S. is provided by the surprising level of high-intensity ground shaking that occurred in Washington, DC, during the 2011 Virginia earthquake. This shaking caused well-publicized damage to some historic buildings, even though the earthquake was moderate in size and its epicenter was 80 miles from the city.

To learn more, USGS scientists deployed 27 temporary seismometersthroughout DC to study variations in the strength of earthquake ground shaking. The instruments recorded ground motions from 30 earthquakes around the world during the 10 months they were in place.

Scientists confirmed that shaking is amplified in the parts of DC underlain by a thin layer of sediments compared to areas built on more solid, harder bedrock. This is because the energy in the seismic waves can move the lighter, weaker sediments more easily than the harder bedrock, and that energy gets “trapped” and echoes multiple times within the sediments.

While this amplification effect has been well documented in some western cities, including Seattle, Los Angeles and San Francisco, this is the first study that directly measures the effect in the nation’s capital. It was previously suspected to occur in Washington, DC, and had been found in other cities such as Boston.

The new results about amplification and the more efficient energy transmission in the East are part of an increased understanding and awareness of earthquake hazards in central and eastern U.S. cities. This information is especially useful to engineers and architects when designing buildings and retrofitting existing structures.

Challenges of Assessing Earthquake Hazards in the East

The geology of the eastern United States and the relatively sparse history of earthquakes to study make it difficult for scientists to assess how frequently earthquakes will occur and how large they can be. Eastern earthquakes are more of a mystery because they do not take place at a plate boundary where most other earthquakes originate. Scientists do not fully understand the state of stress within tectonic plates, and they are studying how stresses accumulate and evolve and how earthquakes are triggered.

Scientists also do not know precisely where most active faults are located in the East. Most faults have not had major earthquakes or movement in the past few million years, and the faults that are active may only have earthquakes every few thousand or tens of thousands of years. Furthermore, any evidence of past earthquakes on the land’s surface in the eastern U.S. is often obscured by vegetation or is more subdued because of erosion.

Conversely, the West has more active faults and many areas with sparse vegetation, meaning earthquakes can leave clear markings that inform research on earthquake history, size and effects.

The National Science Foundation and the USGS recently added new seismic stations in the central and eastern United States, creating a more robust network that augments the monitoring by university partners. USGS scientists also are working with university collaborators on several research projects. For example, they are searching parts of Virginia and the Carolinas for evidence of strong earthquake shaking in the past, monitoring earthquakes and studying faults near the 2011 earthquake in Virginia and the 1886 earthquake in Charleston, South Carolina, and conducting detailed studies of the seismically active central Virginia region.

As far as predicting earthquakes, no reliable short-term earthquake prediction method has ever been developed. Nor do scientists expect to develop a method in the foreseeable future.  However, using scientific data—such as fault locations and patterns of earthquakes over many years—probabilities can be calculated for future earthquakes, and that information is used in development of building codes. Furthermore, the USGS and its partners are working to develop a prototype Earthquake Early Warning System for the West Coast of the U.S. called ShakeAlert. The system does not predict earthquakes, but once an earthquake happens, it could provide a few seconds to tens of seconds of warning before seismic waves arrive and cause strong shaking.