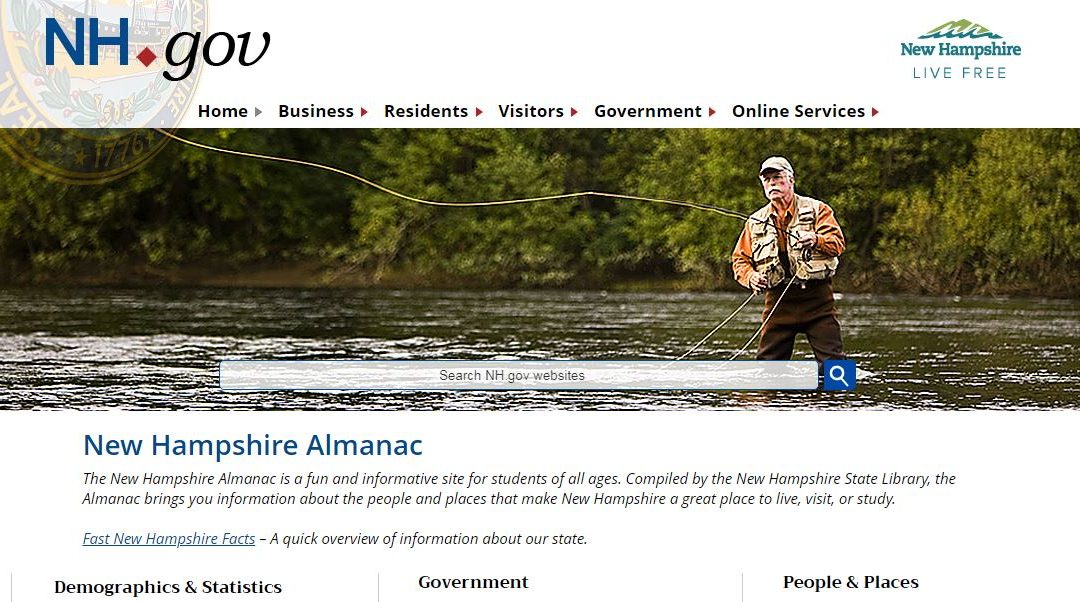 (It’s already back, but the URL is different: https://www.nh.gov/almanac/index.htm)

For a certain segment of the state population, something alarming happened on the Internet recently: The New Hampshire Almanac disappeared.

The almanac, if you’ve never encountered it, is a quixotic collection of state facts and firsts – Tupperware was invented here, as was the computer language BASIC and, to an extent, the Republican Party – plus links to details about our government ranging from useful (census data) to tedious (list of registered lobbyists) to fun (what is the state dog breed?).

The almanac has been part of the official NH.gov website since the beginning. It dates back to early 2003, when the state website launched with not much more than then-Gov. Craig Benson’s smiling face and a bunch of links.

As the website has grown and grown, the almanac has stayed pretty much the same, with the same URL (nh.gov/nhinfo) and a bare-bones look pointing to a bunch of information that is aimed at a very specific history-conscious audience.

“It is designed to answer questions by 4th- and 5th-graders,” said Theresa Pare-Curtis, director of the Web Support Division for state government.

This explains the interest in dogs – but why target those particular age groups? Because those are the grades that study state history under curriculum guidelines.

At least one other group likes the almanac: wikipedia editors. Read New Hampshire articles on the online encyclopedia that anybody can edit and you’ll find the almanac is frequently used as reference material.

In fact, that’s how the almanac’s disappearance was noticed in the Monitor newsroom: Somebody clicked on a wikipedia link to get information about the New Hampshire state seal ended up at a “page not found” message. Consternation ensued; without the almanac, how will we be able to give readers details about New Hampshire being home to the oldest manufacturer of firefighting suits in the world?

Don’t worry, said Pare-Curtis, the almanac will be back, probably by this coming Monday, May 14.

The page disappeared as part of a rolling redesign of the NH.gov website, which now has so many intertwined pages that the changes couldn’t be done all at once. Updates are being done to the most important pages first, mostly meaning those that get the most traffic.

“New Hampshire Almanac gets a fair amount of use, but it wasn’t the highest priority,” Pare-Curtis said.

The redesign will be followed up with upgrades to the back-end system, Pare-Curtis said. Requests for bids will go out soon.

Aside from startling wikipedia, taking down the alamanac accomplished one other thing: It uncovered the fact that a very important document was surprisingly hard to find online.

“This was the only place that had a link to the state Constitution,” Pare-Curtis said. “We didn’t realize that.”