Signal free (on your bicycle) and (don’t, hopefully) die 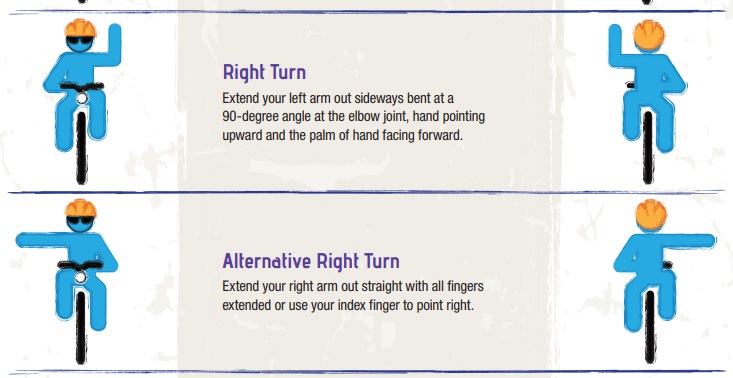 This advice from the NHTSA is now legal in N.H.

Bicycles aren’t really geeky – unless they’re electric, autonomous, GPS-enabled and/or use a hydrogen fuel cell, of course – but there’s something so steampunky about those gears and chains that I think it’s reasonable for me to mention an intriguing change coming to state law.

A bill titled “An act relative to regulating bicycles” was signed into law this week by Gov. Sununu. It clarifies that bikes can cross a solid yellow line on a road if it’s necessary to safely pass “a  pedestrian or a device moved by human power, including a bicycle, skateboard, or foot-scooter” (um, “foot-scooter”?) and, more intriguingly, makes this change to existing law, where the bold material is new:

II.  Right turn–Hand and arm extended upward.  Or optionally, when on a bicycle, by extending the right hand and arm horizontally

I’m not much of a bicycle rider, but it had never occurred to me to signal right-hand turns with my right hand; I’ve always used the left arm in an upright L shape. Now it will.

The National Highway Traffic Safety Administration says this kind of signal is fine, although it calls it the “alternate” version (see PDF here).

People who are vastly more knowledgeable about bicycles than I pointed me to a site called Velominati, which is a semi-obnoxious, semi-clever tirade about proper bicycle procedure as seen from the point of view of bike racers. It says this about signaling right-hand turns:

As I said, clever. And a bit obnoxious.