Fewer homes are heating with wood or pellets – is it warmer winters or the rise in heat pumps? 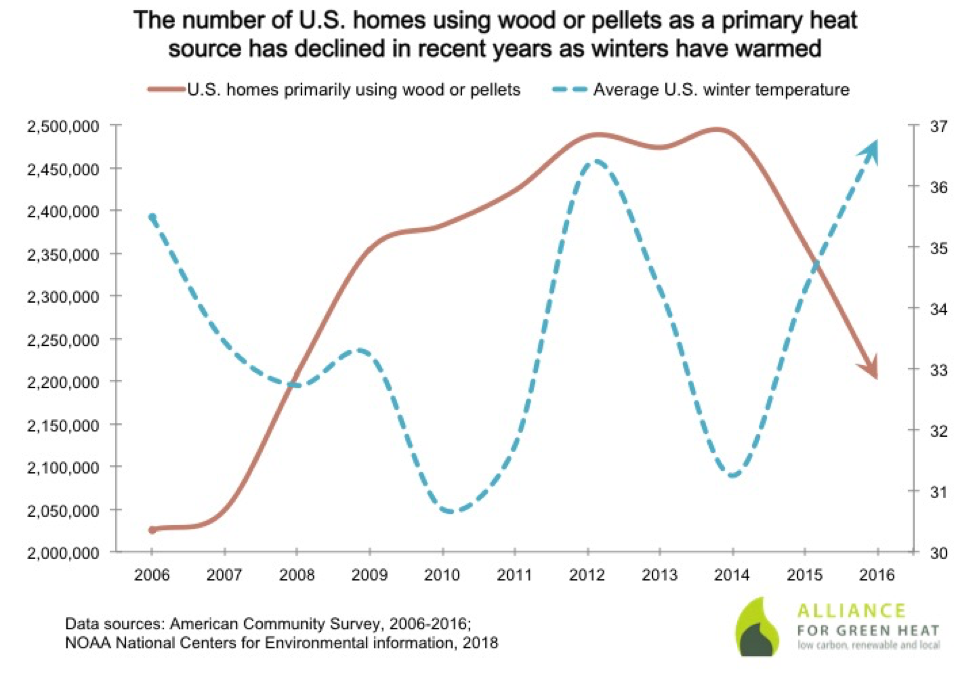 For decades starting in the Great Depression the use of wood as a heating source in the U.S. declined as it was replaced by coal, oil and electricity. But in the first years of this century wood made a little comeback, fueled (ha!) in part by wood pellet technology, which turns wood into a fuel source that can be automatically fed into a burner as controlled by a thermostat.

But that rise seems to have stalled or even reversed, reports the Alliance for Green Heat on its blog.

What’s the cause? Other technologies and changing weather.

Electric heat pumps and solar thermal systems are on the rise. American Community Survey results show that U.S. electric heating rose 10.4% between 2011 and 2016, with the largest increases occurring in Utah (+48%), Maine (+36%), Nebraska (+30%), and Vermont (+30%). About 39% of U.S. homes used electricity as a primary heating source in 2016, making it the second-most common source behind utility gas, which is used in nearly half of U.S. homes.

I have a pellet stove in my living room and while our house is still heating by oil-fired forced hot air, the pellet stove runs much of the winter and greatly cuts into our oil use.  I’m not alone in this configuration, it seems:

Tthis is complicated by the enduring popularity of wood and pellets as a supplementary heating source. The newest Residential Energy Consumption Survey by the EIA estimates that an additional 9.3 million U.S. households used wood as a secondary heat source in 2015.