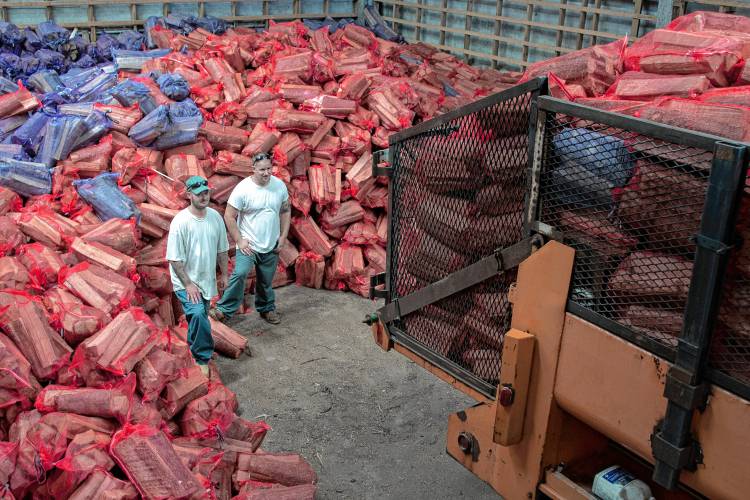 Dylan Greene and John Hammond stand in the garage bugs while working with the Department of Corrections Transitional Work Center in Concord on Wednesday, July 25, 2018. The trucks will be used to transport kiln-dried firewood wood to state parks. Maddie Vanderpool / Monitor staff

The battle against insects that are attacking New Hampshire’s forests takes place on many fronts, but none is more important than one of the state’s largest gas-fired ovens, a converted shipping container where hundreds of thousands of pieces of camp firewood have been baked over the years at a toasty 160 degrees.

Which, surprisingly, isn’t always the hot work it sounds like it would be.

“Sometimes it’s cooler in there than outside,” said John Hammond during a recent tour of the operation, as he gestured inside the container to cages full of wood awaiting treatment. The kiln, he said, cools off before workers unload it.

The walk-in kiln has been operating behind the Department of Corrections Retail Showroom on North State Street in Concord for two years, the latest upgrade in a decadeslong program under which prison inmates make camp firewood to be sold in state parks.

The state buys logs that are cut by chainsaw into 16-inch lengths, then split into firewood by hand or by machine, cooked for 90 minutes in the big kiln, and finally put into mesh bags, 1 cubic foot at a time. The bags – which the parks department proudly notes are bigger than most private firewood bundles – are sold for $6 at all the state campgrounds, from Mount Monadnock to Hampton Beach to the Canadian border.

A recent tour featured Hammond, of Dover, and Dylan Greene of Laconia, who are among a number of inmates with relatively little time left to serve who work on the program. They are part of the Corrections Transitional Work Center, a minimum-security unit in which the residents participate in supervised work as they prepare to return to the outside world.

While Greene and Hammond aren’t professional loggers, much of the job is familiar in a wood-burning state like New Hampshire.

And they say they’ll never take a campfire for granted again.

“I’m looking forward to visiting a state park when I get out,” Hammond said. 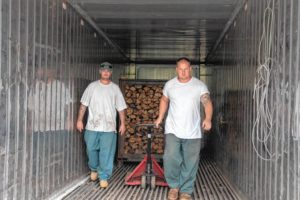 Inmates Dylan Greene (left) and John Hammond load the kiln to dry firewood and kill invasive bugs while working with the Department of Corrections Transitional Work Center in Concord on Wednesday, July 25, 2018. The wood will be distributed to state parks and sold as firewood for campers. Maddie Vanderpool / Monitor staff

The firewood program has operated for decades, but it was only in the summer of 2016 that it became central to efforts to keep tree-destroying insects from being carried into New Hampshire woods.

The motivating factor for the change is the emerald ash borer, an invasive insect from Asia that was found near Detroit in the early 2000s. As it started spreading, people noticed that new outbreaks often happened near campgrounds, which made them look at an issue nobody had considered before: Firewood as a vector, the biological term for one living thing that carries other living things.

“From 2006 to ’09 we did a bunch of our own research, confiscated wood, reared insects. It turns out that firewood is an amazing vector of all kinds of insects,” said Kyle Lombard, forest health program coordinator for the state Division of Forests and Lands.

“Our research found, on average, 35 insects per stick of wood,” Lombard said. “Imagine 35 insects times everybody coming to New Hampshire who bring their own firewood, and you’re talking about an insane amount of insects. … If they’re coming from over the border, it’s no big deal. But coming from Ohio? Huge deal! Or from Florida, California, Texas – all these other places that have pests we don’t have.”

In recent years, New Hampshire, like most states, has forbidden people from carrying firewood into the state, and it encourages people not to carry firewood from one part of New Hampshire to another.

But campers need firewood. If it’s not available they’ll bring their own, despite the rules. Hence the state program overseen by the New Hampshire Division of Parks, which owns the kiln.

Chris Lounsbury, who manages the forestry program for the Department of Corrections, says that while biologists say the wood needs to be cooked at 140 degrees for an hour to kill insects, he does it at 160 degrees for 90 minutes just to be sure. It also kiln-dries the wood nicely for a quicker, easier fire.

The program delivers around 35,000 of these bags every year, close to 300 cords of wood. At the start of camping season, it fills a huge barn with them in preparation for delivery, 400 bags at a time in huge dump trucks.

“We run this pretty much every day,” Lounsbury said of the kiln, although he added that demand is driven by weather. Wet weekends mean less firewood is bought.