It’s a pain in the neck to lift 20 tons by 250 feet; Swenson Granite would like to quarry stone differently 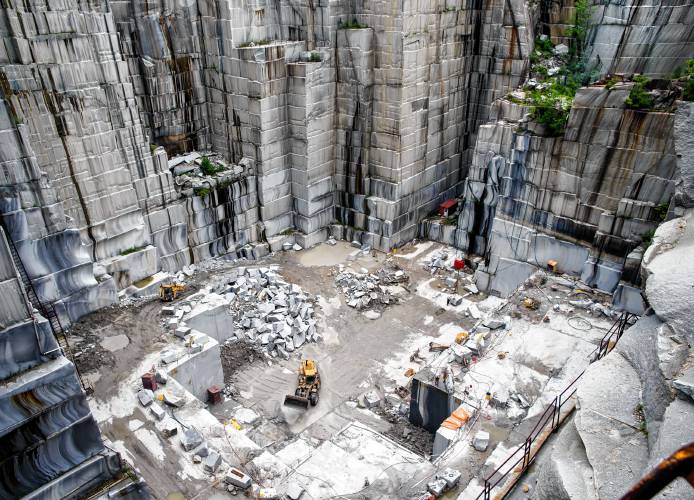 (There are lots more great photos and a video of the quarry at this article on the Monitor website: https://www.concordmonitor.com/swenson-granite-concord-nh-polycor-quarry-19039156)

Almost two years after being purchased by a Quebec firm, Concord’s iconic Swenson Granite Quarry has expanded operations slightly on Rattlesnake Hill, even as it starts reconfiguring its approach to tackle one of the paradoxes of mining.

“The deeper we go, the better the stone gets – but the deeper you go, the more expensive it is,” Scott Herrick said as he watched the quarry’s massive derrick crane slowly raise a 13-ton block from the floor of the “deep hole” where granite has been quarried since at least 1883. The company has begun efforts to get to more stone from the east side of the mountain, rather than from on high.

The quarry had been operated by the Swenson family of the Concord area for four generations until it was sold in September 2016 to Polycor, one of the world’s largest makers and distributors of natural stone. At the time Polycor said it was buying Swenson partly to get access to the Concord Gray stone inside Rattlesnake Hill that has become the default stone for granite curbing, but also for its growing retail operations. Two new Swenson Granite stores have been opened in Massachusetts since the purchase, and the Swenson name has not only been retained in Concord but is used in other Polycor operations, such as a new production facility in Jay, Maine.

There were concerns that the purchase would cut into operations in Concord, but Herrick, president of Swenson Granite, said that staffing has slightly increased and production has risen since then. About 16 people work in the deep quarry, roughly 14 more in the production studios cutting blocks into sellable stone, and with sales and administration staff, about 50 people are working in Concord.

The company owns roughly 200 acres on the mountain behind its offices on North State Street, of which about a quarter are being worked. It is the largest granite quarry still operating in New Hampshire.

The privately held firm does not disclose sales figures but has previously estimated it would get about 42,000 tons of stone from Concord in a year, equaling sales between $10 million and $15 million.

Approaching the granite from the side

The granite exposed at the floor of the quarry, some 250 feet below the highest point on the high wall, is a fine example of Concord Gray. Not only is it a uniform color and texture but it is “thick bed” stone, with a lot of distance between big cracks, making it cheaper and easier to quarry large amounts of high-quality stone.

And there’s no sign of it ending, Herrick said. Keep digging and you can keep quarrying.

But it’s time-consuming and expensive to move things and people into and out of a 250-foot hole. The difficulty isn’t just in hauling up 20-ton blocks of stone after they have been cut.

Swenson also faces issues like having to disassemble a new front-end loader because it’s too heavy for the derrick to lower into the quarry with its boom extended, or that it takes workers 20 minutes to get to their workplace by being lowered in a huge container called the Manbox, and even that disposed-of, unusable chunks of stone – called grout – are so expensive that they often pile up and get in the way.

That’s why Swenson has been working on accessing the underground stone from the side, instead of from above.

The firm has begun cutting into the mountain from the east side in hopes of accessing the good stone via a drive-in quarry, which would allow trucks to be loaded right at the cutting site, reducing operating costs and speeding up operations.

Preparation for this work can be seen from I-93 and other points to the east of Rattlesnake Hill. What appears to be a visible expansion of the quarrying is actually a large pile of old grout that was accumulated over the years after being pulled out of the deep hole. The pile had to be moved to make way for new excavation and is now much more visible from below, Herrick said.

This new approach has been going for a while but has not yet reached usable stone, Herrick said. But since granite has been quarried on Rattlesnake Hill since the Civil War, there’s probably no rush.