Why are there solar panels on the cab of a very big truck? 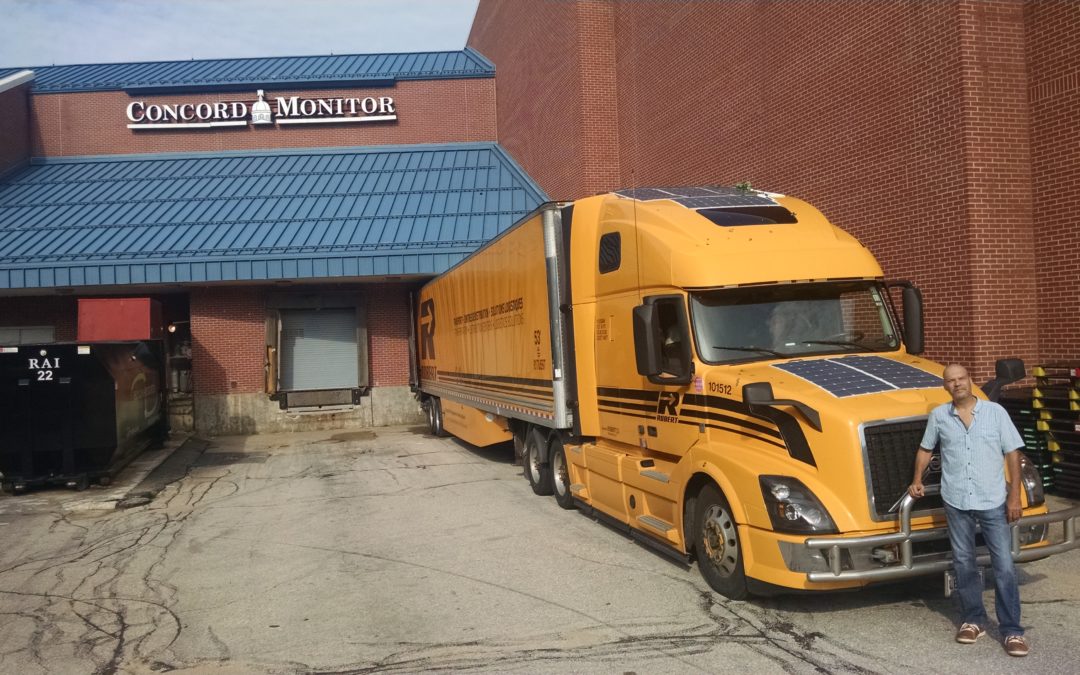 The solar panels on this cab charge batteries that run the overnight equipment for drivers like Sebastien Labrecque. Photo: David Brooks

When I pulled into work Wednesday there was, as if often the case, a big tractor-trailer unloading rolls of newsprint for the press. But then I noticed something different: It has flexible solar panels attached to the hood and the top of the cab.

“Sometimes people ask me, is that truck a Transformer?” joked Sebastien Labrecque, the driver.

The panels, he explained, feed into four of eight batteries in the huge cab. Those batteries power such things as lights inside the trailer, driver controls, and the refrigerator and air conditioning for the berth above the cab, used by drivers to sleep on long-distance runs. If you’ve ever pulled into a truck stop at night you’ll have noticed all the trucks sitting there with their engines idling, they’re doing it to power those overnight systems. Running them on batteries instead of traditional diesel-powered generators, Labrecque said, is not only better for the environment but is quieter, which he appreciates when trying to drift off after a long day on the road. “You are there and you hear that going all the time,” he said, shaking his head. “Not good.”

Labrecque drives for Robert Groupe, a huge (more than 3,000 employees) trucking and logistics firm in Quebec. The company began switching from diesel generators for batteries for this auxiliary equipment in 2014. It experimented with rigid solar panels to help keep batteries full up before switching to six flexible 100-watt panels per cab, that are riveted to the roof fairing and hood. The panels can generate an additional four hours of battery life and fully recharge them in eight to 10 hours of normal daylight, according to this report. The batteries can also be charged by an auxiliary generator, but even that, Labrecque noted, is much quieter than the engine. Between the solar panels and the smaller generator, the company has estimated that the saving in fuel burned will cover all costs within 3.5 years.

These are big trucks we’re talking about – this one had a 53-foot trailer with a 21-ton load limit, filled with rolls of paper weighing 1,200 pounds each. Many people think that electrifying commercial trucking will be a better business, and will do more to help the environment in the short term, than trying to electrify the automotive fleet. The solar panels and batteries on these Robert trucks are a small step in that direction.